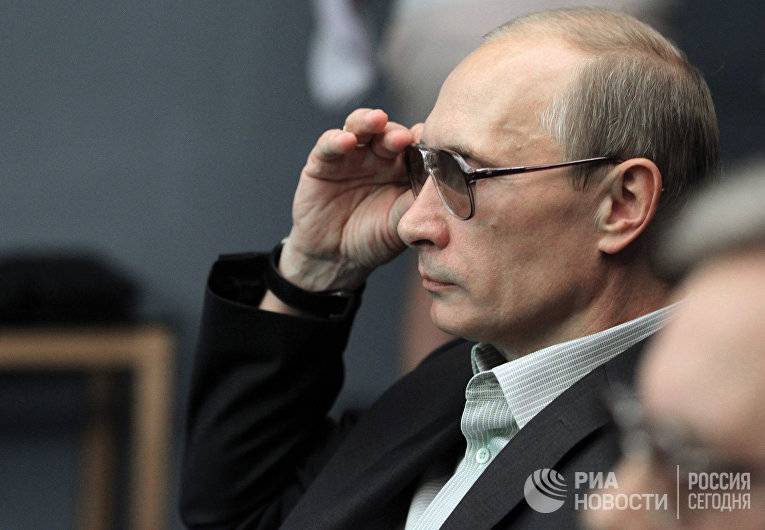 If Donald Trump would like to do a great favor to Vladimir Putin with his supposed relationship with Russia, then at least in the Persian Gulf he does it. Because the ruler of Russia became the main winner in the global geopolitical struggle, during which the Kremlin for a long time looked like a loser.

Before Trump’s delicate Middle East initiative, the situation was as follows: Western sanctions imposed in response to the annexation of the Crimea should have isolated Russia. The Russian economy has fallen, billions from the Moscow Stabilization Fund quickly burned out. In Syria, Russia's last ally, the dictator Bashar Asad, was forced to defend himself, since he was on the verge of overthrow. During the bombing of Libya by the West, Moscow was outraged that the ruler of Muammar Gaddafi was overthrown, contrary to the UN mandate. According to the Kremlin, a regime change organized from outside occurred in Libya. According to allegations from Moscow, NATO increasingly pressed a huge empire. Vladimir Putin was angry, relations with the West darkened. For more than a year, the concept of “new cold war” in Europe remains a popular expression.

Today, the situation looks completely different - only partly due to the actions of the Kremlin’s host, Vladimir Putin. And above all, because he took over the tactics that his rival Angela Merkel successfully applied, and which has now also benefited him: wait and let the others figure it out. This, coupled with several active independent steps, once again brought Russia to the leading position in the global hierarchy, which has already been written off by historians, political scientists and some Western politicians. And its value will continue to grow - including thanks to Trump.

Probably, in reality, the intervention of Russian hackers in the course of the election campaign in the United States in order to bring Trump to power will never be proved. As well as the assumption, which still remains a topic only on CNN - as if cybercriminals from Russia falsified reports on the website of the Qatar news agency that other Gulf countries have isolated a small country because of this.

But the fact is that the United States and Europe have as passionately fallen out as the Arab world. The head of the White House spent his first trip in the Royal Palace of Saudi Arabia. In Riyadh, Trump enthusiastically praised despots, not realizing that because of their stubborn behavior, they were often the culprits of the riots in the region, which were called the "Arab Spring". While Trump is in Arabic dancing with sabers in Riyadh, Western intelligence agencies blame Sunni Islam leaders for supporting Salafi groups, funding radical mosques in Europe, and patronizing criminals who perpetrated the September 11 attack at the World Trade Center in New York. But Iran and Qatar are found guilty of financing terrorists.

With his policy, Trump split the Arabs, whom they really wanted to unite against Iran. And he supports those who rely on the army, and not on diplomacy, although the Sunni alliance under the leadership of Saudi Arabia has repeatedly won the fight for Yemen from a military point of view from a military point of view. Even without the help of logistic and intelligence support from the United States, Britain and Israel.

Trump fired a dangerous flame, and Putin warms his hands on it

When the West wanted to isolate Russia, China and Iran were on the side of Moscow. Since the military rose in power in Cairo again, Russia has again been a welcome partner in Egypt. The current conflict in the Persian Gulf is driving not only Qatar to the Kremlin, who has already secured a stake in the Russian oil giant Rosneft. Turkey, a NATO country, has turned its back on Europe in this dispute. Anti-Russian sanctions never concerned a truly important gas industry and Swift payment system was not turned off. Increasingly loud cries even from the West, calling for the lifting of sanctions, join the craven policy.

In Syria, Russia resolutely stood with Iran on the side of the dictator Assad, and now has again become one of the decisive forces in the Arab region. Turkey, which turned away from Europe, has long seen Russia as a close partner. Iran is firmly on the side of Moscow.

China, which Trump insulted with its attitude to climate issues, is already close to Putin. In Libya, the Russian energy concerns have long been firmly established and are politically much more closely interacting with the new regime than the European competitors. The countries of the Persian Gulf are currently politically disconnected themselves. And Trump cannot turn his back on Russia when it comes to finding partners in the fight against international terrorism. Today we can say about Putin by a variation of the quote by Julius Caesar: he came, looked and won.