As the "Open Russia" from the "Military Review" requested money 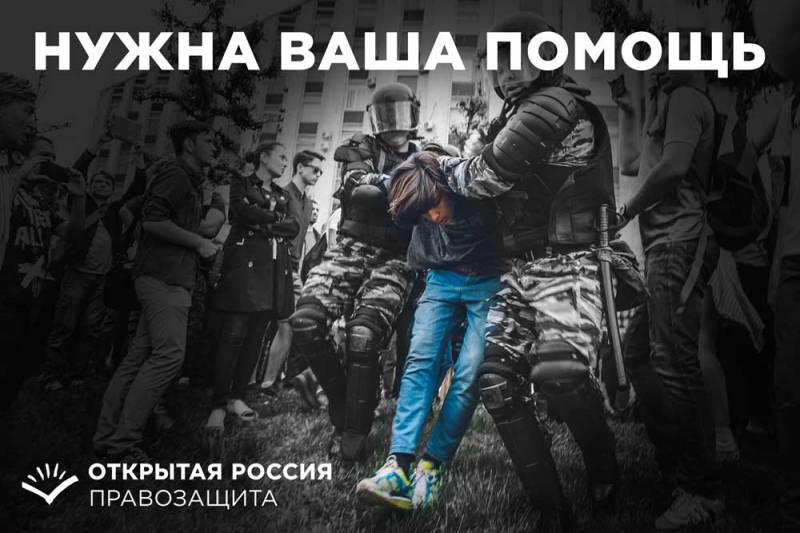 Fairy tale, law deed, fairy tale, and in the style of Saltykov-Shchedrin. At the post "IN" collapsed cry for help. But surprised, to say the least, killed someone from whom the letter came.

Text of the letter (without editing):

“Our lawyers for the evening of 12 June made 25 trips to the Moscow Department of Internal Affairs. There have been more 530 detainees. We all did this with money that was sent to our account in a day.

However, the detainees remained at least at three ATS in Moscow, today's money is over, and we cannot send lawyers even to these ATS - advocates ask for prepayment, and the collected funds are not enough even for those who are in the branches now. And it is quite possible that in the night there will be new ATS where people are still sitting.

To send lawyers to three branches of Moscow, you need somewhere 60,000 rubles. But this is only the beginning: the courts in Moscow and St. Petersburg will need a lot more money. According to the Red Button, 1550 people from 1790 in the country were detained there (750 in Moscow and 800 in St. Petersburg).

At the same time in St. Petersburg 22 offices, and at the moment there are no funds for the whole city at all. Departure of a lawyer for each ATS now, at night, costs 25 000 rubles.

Even as part of the savings on every three people who go to court, you need 30 thousand rubles for the 2 instance. Considering the number of detainees, consider yourself. ”

An interesting alignment ... The question arises, what does human rights activists Mikhail Khodorkovsky have to do with the events on Tverskaya and others? Where does such zeal and love of neighbor come from?

There are two answers: either the gentlemen from the “OR” decided to just knock off money on the seemingly godly deed of protecting the poor people who fell into the bloody torture chambers of the Ministry of Internal Affairs, or

Either those who went to illegal meetings, more precisely, to legitimate meetings, but in unauthorized places (which is basically the same thing), was clearly guaranteed legal assistance and protection.

But the Interior Ministry worked so quickly that the cashier failed. The result of which was this cry of the soul.

No, everything is beautiful and clear. Without waiting for the relatives of the “prisoners” to intervene, the human rights organization quite clearly replaces them. Just amazing even.

Naturally, it became very interesting that there is now "Open Russia". Went to the site and ...

Right on the main page I see this: 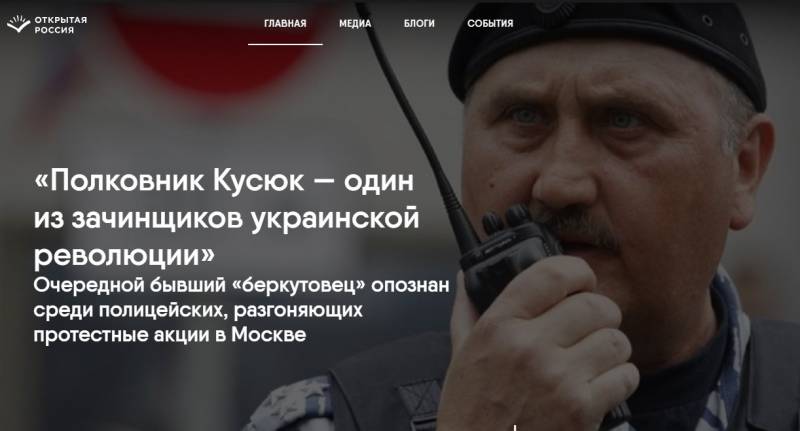 And then comes the huge monologue of the Gromadska-TV correspondent Anastasia Stanko about Kusyuk.

Whoever desires, plunge into the brown atmosphere https://openrussia.org/notes/710411/who do not want to get dirty, I will give several excerpts. Spelling and punctuation saved me intentionally.

“We all knew that he fled to Russia, and there was nothing strange about that - many of the Kiev’s Berkut are now working in the Russian riot police in Moscow or in the Crimea. These people (and Mr. Kusyuk too) are suspected of several criminal cases of security crimes in the days of euromaidan. 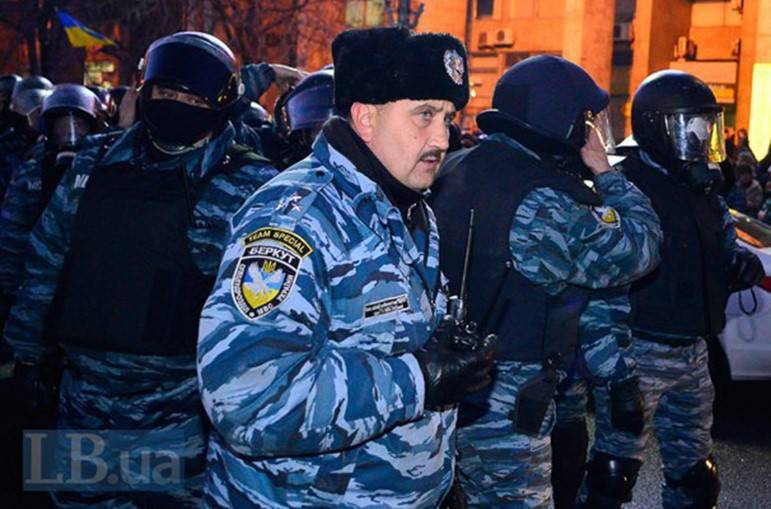 It has already been proven that it was from these people’s automats that the 20 activists of February 2014 were killed on the bloodiest day of the revolution.

The 23 man from the Kiev Golden Eagle regiment (plus two seconded from the Internal Troops) shot at the protesters. 48 euromaidans were killed at their hands and 80 was injured. That is, in aggregate, more than 100 people they actually shot in two hours. ”

The current Ukrainian Ministry of Internal Affairs declares that, by order of Colonel Sergey Kusyuk, all documentation on the activities of the "Berkut" was destroyed during Euromaidan. In late February, 2014 of the year, in the last days of the Yanukovych regime, Kusyuk personally ordered to destroy the documentation, including personal cards of the Berkut employees and acts of acceptance and issuance weapons.

It is also known that in February 21 2014, in an acute phase of confrontation, Kusyuk ordered 130 Kalashnikov rifles to be issued to soldiers of the Crimean company "Berkut" and 106 - Dnepropetrovsk, and also 1 sniper rifle and 1 pump gun "Fort"

These are the faithful dogs that served the Yanukovich regime, and the Putin regime was useful.

The special unit of the Interior Ministry "Berkut" was disbanded immediately after the victory of the revolution - "in view of the complete discredit to the Ukrainian people."

Russian riot police in view of complete discredit to the Russian people has not yet been disbanded. The exact number of high-ranking Ukrainian ex-security officials who have fled from justice and have found refuge in the ranks of the riot police and the Ministry of Internal Affairs of Russia is still unknown. "

All clear? And me too. But now I know who you can say "thank you" for the fact that the Crimean "Golden Eagles" were not with crowbars on the passes.

Good article, what else can I say? On the main page, having eclipsed even the rotation around the latter-day priest Gapon - Alexei Navalny.

Apparently, the topic is more important.

And these people want us to fund their legal work?

Apparently, quite some of the money was bad.

Well, and a little information from open sources on what is "Open Russia".

Open Russia is a Russian (doubtful, but they say) non-governmental organization established in 2001 by shareholders of the Yukos oil company and a group of individuals to implement charitable, educational and outreach projects.

With regards to "individuals" - here is a wonderful list.

In addition to the interregional public organization "Open Russia", from 2001 there is the eponymous international charitable foundation "Openrussia Foundation", also founded by Mikhail Khodorkovsky, Mikhail Piotrovsky, Nathaniel Rothschild, former US Secretary of State Henry Kissinger and former US Ambassador to the USSR Arthur Hartmann.

Chairman of the Board of Open Russia - Alexander Solovyov (from 16 on April 2017), before that Mikhail Khodorkovsky.

In 2004 — 2005, there were about 50 branches of the “Open Russia” in the country's regions, and the Ministry of Culture and Mass Communications of the Russian Federation was assigned the status of “inter-regional”.

We believe, of course, believe! We are all gullible in Russia ...

Nevertheless, Open Russia and Mr. Navalny, whose followers are sitting in cells today awaiting trial, have warm and friendly relations.

In April of this year, during the “OR” conference, which was held in Tallinn (well, not in St. Petersburg or Moscow, is it true?) One of the decisions was to support the candidacy of Alexei Navalny at the presidential election and Dmitry Gudkov in the election of the mayor of Moscow.

Khodorkovsky - Navalny: dear, your friends are my friends!

Yeah, I see. But why now Khodorkovsky's friends should be otmazyvat those to whom such ardent letters have flown? In the name of what?

No, Khodorkovsky’s unseen presence behind the events was very embarrassing. A talkative clown, who considers himself a lawyer Leshenka N., is one thing, and quite another when there is an organization like OR behind him and an organism like Khodorkovsky.

I think it makes no sense to give his characteristics, we all know very well what he is.

And if Mr. Gapon-Navalny is from our planet “Nibiru”, then after all this it will be difficult to talk. It turns out that I even take it very much, and now it is clear from whom.

But there was a patch. Apparently, Mr. Khodorkovsky did not expect such a rapid increase in spending and expenses.

And I decided to pass it on to us, to the Russians. And what? Let them throw money attorneys who are rescuing "fighters for justice"!

Mikhail Borisovich, really, you are too far away from Russia. Fools here are less and less, honest word!