August 27 2010
1
Heckler & Koch is reluctant to talk to the press, as its main clients are the Bundeswehr and the armed forces of NATO countries. It's not easy to get acquainted with weapons H&K novelties and in the army itself. The point here is not at all being closed, but in the fact that the Bundeswehr sends the latest infantry weapons for "running-in" to crisis regions - to Afghanistan, Africa, the Balkans and the Middle East, so that in Germany itself it is still a rarity. Nevertheless, the German military department made an exception, and we were kindly given the opportunity to get acquainted in detail with one of the advanced developments of the German company - the MP7 model, which is a fundamentally new type of small arms - PDW (Personal Defense Weapon). 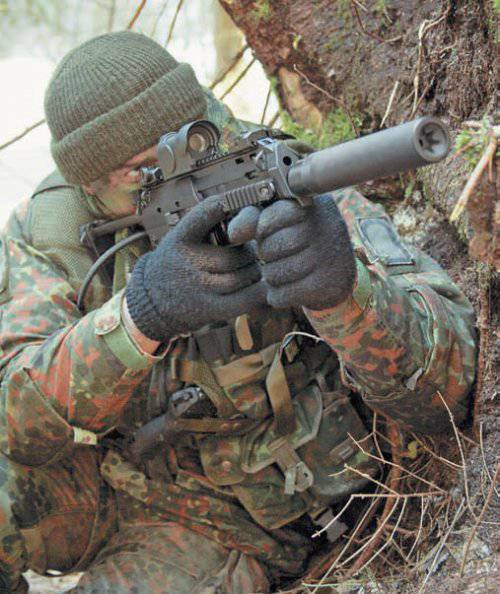 The term PDW originated in the mid-80s when Heckler & Koch introduced the MP5K-PDW, a variant of the MP5K submachine gun with a folding stock. However, it could not be considered a real PDW, combining the compactness of a pistol, the rate of fire of a submachine gun and the effectiveness of an assault rifle: the 9x19 cartridge did not allow creating a weapon that would meet such conflicting requirements. The first real step in this direction was taken by the Belgians, who presented in the early 90s a complex from a Five-seveN pistol and a PDW FN P90 pistol chambered for the new 5,7x28 cartridge. Heckler & Koch found itself in the position of catching up and only a decade later broke the FN monopoly by offering their version of the PDW in caliber 4,6x30. Since then, the Belgian and German PDW models have been competing with each other, and NATO has not finally decided in whose favor to make a choice, allowing the members of the alliance to make it independently.

PDW for the Bundeswehr

Today in the German army, the proportion of classic infantry, that is, soldiers who must directly fight the enemy with an assault rifle, is relatively small. The focus is on both the emphasis on peacekeeping and counter-terrorism missions, and the saturation of modern troops with heavy and high-tech weapons systems that require numerous means of logistics, support and supply. Thus, in the modern army there is a significant range of military specialties whose primary tasks are not related to direct participation in hostilities. On the other hand, military personnel of this category (drivers of combat vehicles and vehicles, sanitars, staff workers and communications workers, soldiers of engineering and repair units, etc.) are not insured against the risk of attack from the enemy and therefore need self-defense weapons. Until recently, in the Bundeswehr, its role was performed by various types of small arms: P1 and P8 pistols, MP2 Uzi submachine guns, as well as G3 and G36 assault rifles.

A pistol and a submachine gun have two significant drawbacks when used for this purpose. The first is unsatisfactory accuracy, ensuring acceptable shooting efficiency only at relatively short distances. The second disadvantage is the weak penetrating action of the pistol cartridge, which makes fire on the attacking manpower, protected by body armor, ineffective, not to mention shooting on lightly armored vehicles.

The assault rifle is free from these shortcomings and equipping the soldier for self-defense with it was one of the compromise solutions. However, experience with G3 and G36 rifles has shown that, due to its size, the rifle often becomes a hindrance when a soldier performs his basic duties. In conditions of limited space (in the cockpit of a car, airplane, or helicopter, in the combat compartment of combat vehicles), the rifle and its attachment devices take up quite a large amount that could be used more rationally. 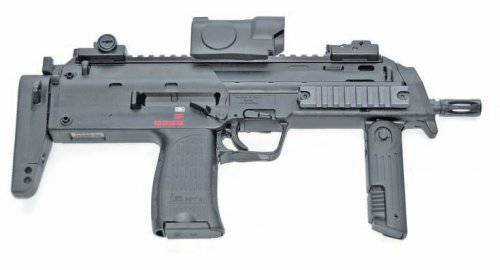 The study of the problem by BWB (Army Logistics Department) specialists revealed the need to develop and adopt a specialized self-defense weapon, which would satisfy three basic requirements:
- the sample should be a full-fledged weapon capable of firing single and automatic fire;
- according to its dimensions, the weapon must occupy a position between the pistol and the submachine gun;
- in terms of ballistic properties at the distance of PDW use, the new weapon should not be noticeably inferior to the weapon chambered for 5,56x45 and ensure the defeat of manpower in a bulletproof vest at a distance of up to 200 m.

In this case, German experts say that we are not talking about replacing existing types of small arms. PDW is considered by them as an addition to the existing infantry weapon system, which allows to fill the existing niche between pistols, submachine guns and assault rifles. 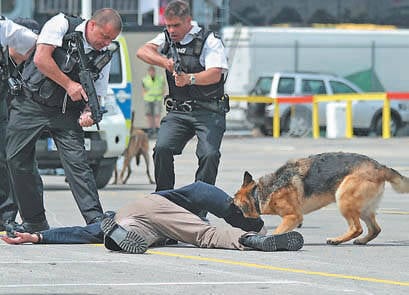 MP7 on the teachings of the British police

Personal self-defense weapon PDW MP7 was developed in the late 90-ies in accordance with the NATO program for the "modernization of the soldier" AC225 of 16.04.1989/4,6/30, in Germany called the Infanterist der Zukunft (IdZ) - the infantry of the future. Despite this, Heckler & Koch financed the creation of PDW entirely from its own funds. The Oberndorf-based company is the largest European manufacturer of infantry weapons and the most important supplier for the Bundeswehr, so its designers knew exactly what the German military needed. The XNUMXxXNUMX cartridge was designed by the British ammunition manufacturer Royal Ordnance, Radway Green (part of BAE Systems) in cooperation with Dynamit Nobel.

Despite the fact that the new weapon is not a submachine gun, it still received the “submachine gun” designation Maschinenpistole 7 (MP7), since this type of small arms is not provided for in the Bundeswehr's weapons catalog. The number "7" means that this is the seventh sample assigned to this type of weapon and recommended for supplying the German armed forces. The predecessors of the PDW MP7 in the catalog were the MP1 (Thompson M1A1 submachine gun), MP2 (Uzi), MP3 and MP4 (Walther MP-L and MP-K respectively), as well as the H&K MP5. Which model of the submachine gun was assigned the designation MP6 was not reported in the open press. To avoid the use of the English-language abbreviation, the Bundeswehr coined its term "Nahbereichwaffe" (close range weapon) for PDW. However, until now this name has not caught on and is very rare.

The MP7 prototype was first introduced in the 1999 year, but its tests revealed the need for a number of design changes: a flame arrester and a non-removable receiver lid were introduced, the picatinny rail was extended and made to the full length of the receiver, the fixed sight of a mechanical sight, made as part of the venting device. 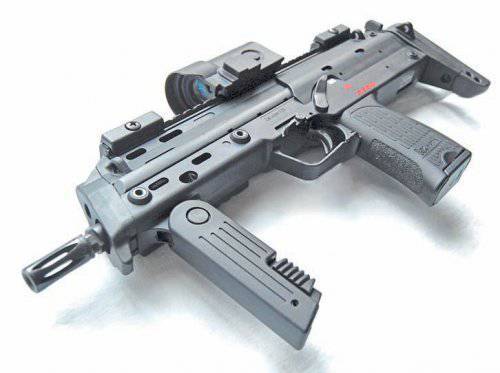 These improvements were completed by the 2001 year, after which the new weapons entered the army special forces units (KSK), special operations division (DSO) and the military police. After upgrading the 2003 of the year, the PDW received the MP7A1 index and in that form was adopted by the Bundeswehr to replace the MP2A1 submachine gun with a folding metal butt. The upgrade consisted in changing the shape of the pistol grip and butt, introducing an additional side Picatinny rail and a folding mechanical sight.

In the German army, MP7A1, it is planned to arm both soldiers and officers of combat units (machine-gun crews, crews of combat vehicles) and personnel not directly involved in combat operations (medical and transport units, military police). It is believed that such retrofitting will solve two important problems. The first is to equip the servicemen with self-defense weapons, with which they could, at short distances, really withstand the attacking side armed with assault rifles. The second task is to eliminate the existing variety of self-defense weapons, so that the orderly, cook, driver and helicopter pilot use a single sample of self-defense weapons, having in addition similar device and principle of operation with the main army rifle G36. In this regard, NATO experts call the adoption of the PDW as a “3: 1 solution”, since the new weapon combines the properties of three types of small arms: a pistol, a submachine gun and an assault rifle. 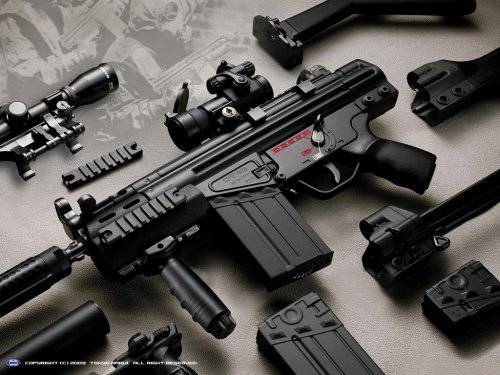 In 2002, Heckler & Koch began developing a 4,6x30 pistol, known as the Ultimate Combat Pistole (UCP) and the military designation P46. Together with the MP7, this pistol was to be part of the small arms complex chambered for 4,6x30, like its Belgian counterpart. But until now, the military has not shown interest in the P46 and the further fate of the project remains in question. In the civilian market, UCP (P46) also remained unclaimed, mainly due to its narrow specialization - the fight against manpower in personal body armor.

Unlike a pistol, PDW MP7 claims a wider scope. In addition to military use, this weapon aroused interest among the services of VIP-guards and bodyguards, for whom the possibility of concealed carrying is especially attractive. Another of the possible areas of use of the PDW MP7 are the special police units (according to the statements of the German officers of the order, the criminal elements in body armor are a new reality that today has to be reckoned with).

The equipment of the PDW Bundeswehr is slow and in ordinary parts it still remains exotic. The first large batch of MP7A1 (434 instance) was delivered in 2003 year, and by now the total number in the troops is about 2 000. PDW is being tested in the DSO division, as part of the IdZ program. In particular, MP7A1 received as a personal weapon rifle-gunners infantry units, armed with MG4 machine guns. Unlike the MG3, the new machine gun is serviced by one person, so there was a need to equip the shooter with a more serious weapon of self-defense than the 9-mm pistol previously used for this purpose. The Bundeswehr military police equip their bodyguards with PDW MP7A1. Of the special forces using MP7A1, we can mention the already mentioned KSK (2002 copies were supplied in 60 year), Navy special forces, GSG-9, and Hamburg police special forces. MP7A1 has become one of the means to combat the financial crisis. The purchase of a lot from 1000 PDW with a total value of 3 million euros for the Bundeswehr is part of the program adopted in 2009, aimed at reviving the German economy.

Aroused PDW interest outside Germany as well. In September 2003, the US Marine Corps conducted a comparative test of the MP7 and the P90. For this purpose, the Americans purchased 12 MP7 units from Heckler & Koch, which were equipped with mufflers and were intended for testing by helicopter crews. During trials, pilots wore the PDW in a hip holster, and a separate muffler in a life jacket pocket. In 2003, the UK Department of Defense intended to acquire 15 such weapons, primarily for the police. British police use it in the MP000SF (Single Fire) semi-automatic variant. In May 7, the Norwegian Ministry of Defense ordered 2007 MP6500A7s to replace 1mm submachine guns. In total, the MP9 is used by 7 countries; it is also adopted by the UN forces.