Werner von Braun. Missile Baron in the service of NASA 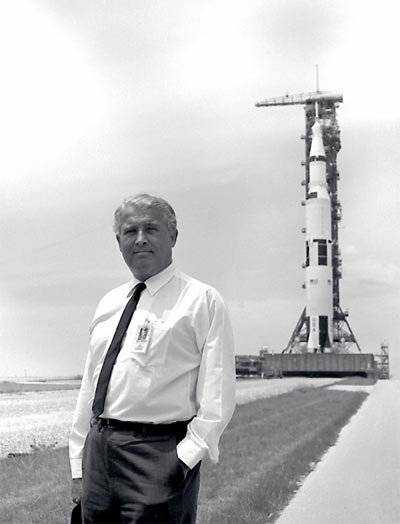 
On one of the first days of 1945 in May of the year, noticing the American soldier, Werner von Braun’s brother and colleague, Magnus caught up with him on a bicycle and turned in broken English:
“I&#39;m Magnus von Braun. My brother is the inventor of Fow-2. We would like to surrender. ”

A close fragment of an interview with Werner von Braun, which he gave after his capture, was preserved: “We know that the fact of our creation of a new weapons confronts us with the moral choice of which victorious nation we will pass on to our offspring. This question faces us more acutely than ever before. We do not want the world to be involved in yet another conflict. We believe that by transferring our new weapons
to people living under biblical laws, we will be sure that the world is protected. ” (“People living according to biblical laws” a few months after this interview with von Braun dropped atomic charges on Hirosoma and Nagasaki. More than 250 000 people were killed in two bombings. The bombardment had no significance in terms of completing the defeat Japan. Former Nazi designer von Braun, however, had nothing to do with it.

World War II smoothly flowed into the Cold War. And since the world rocket race had already been declared by Nazi Germany, and the hunt for rocket and nuclear secrets began with it, the Americans did not hesitate and already in the summer of 1945, they transferred the von Braun group with missiles, components and documentation to Fort Bliss (Texas ) located in close proximity to the White Sands Missile Range in the neighboring state of New Mexico. These places should be considered the cradle of the American missile program.

Over the next 15 years, Werner von Braun worked in the United States military, creating V-2 guided ballistic missiles, he watched their launches at the White Sands test site as part of the Hermes project, which started less than a year after von Braun&#39;s captivity - 16 APRIL 1946

In 1950, the Von Braun design team was transferred to the Redstone arsenal near Huntsville, Alabama (one of von Braun’s missiles carries the same name). Here, experts began the construction of an army ballistic missile Jupiter-S (Jupiter) on the basis of the ballistic Redstone.
In 1955, von Braun received US citizenship, and until then, the designer had not been introduced to the general public, constantly being monitored by security forces.

1960 year was another turning point in the fate of the designer. Von Braun’s missile center was transferred to the Aeronautics and Space Administration, NASA, and immediately received an order for the construction of Saturn missiles (Saturn). Career von Braun continued her rapid climb. He was appointed the first director of the Space Flight Center (Marshall Space Flight Center) of NASA, and was also appointed as chief designer of the Saturn-5 rocket (Saturn V). This carrier rocket was intended for manned flights to the moon under the Apollo program. In addition, von Braun led the work on the explorer satellites and the Apollo spacecraft.

The former Nazi designer von Braun, who did not want to surrender to the USSR, became one of the leading researchers of outer space in the United States. The culmination of the career of Werner von Braun was 1972 the year when he was appointed deputy director of NASA and managing spaceport at Cape Canaveral. However, in the same year, the US economy experienced a recession, which was one of the reasons for the collapse of the lunar program. A cosmic dreamer, a fan of Cosmos exploration, von Braun was offered to engage in more profitable from the economic and military points of view, the launch of technical and reconnaissance satellites. Apparently, the designer did not find a common language with the upper management and was dismissed. The lunar program was curtailed, and mankind continues to dream of the flights of spacecraft to Mars, the long-time goal of von Braun.

The last post of von Braun was the post of vice president of Fairchild Space Industries, which produced aerospace equipment.
In the 1973 year, Werner von Braun underwent surgery to remove a cancerous tumor. However, in 1974, he still continued to work on the satellite project, and gave all his free time to flying on a glider. But illness and old age took their toll, and in June 1977, the “rocket baron” Werner von Braun died.
“Werner von Braun. From the Nazis to NASA »

Ctrl Enter
Noticed a mistake Highlight text and press. Ctrl + Enter
We are
Secrets of Peenemünde. Project AmericaFAU missiles - &quot;weapon of retaliation&quot;
12 comments
Information
Dear reader, to leave comments on the publication, you must to register.