Southern sight: how to serve in the legendary artillery brigade in Adygea 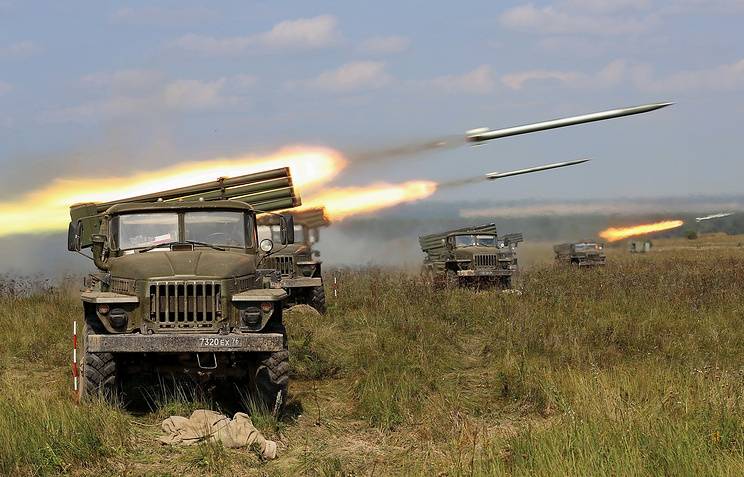 
22-year-old Marina Mkrtchyan in just six months of service learned how to orient an artillery unit in the sun and can find a mistake in opening fire even from an experienced gunner. It overlaps its record of standard twice, and, following the results of a recent field exercise, along with other fighters, the brigade received a medal. The commander of the unit, Colonel Alexander Baranik, tells about all this not without pride. Among his subordinate women, there are few — only 3,5%. They serve here as a contract.

On the first day of my service I walked along the central alley of the brigade and smiled. Each counter officer and soldier asked me the reason for the smile that did not come from the lips. Well, I'm so emotional and cheerful! Just serving the Fatherland was my dream from childhood, which I managed to realize. I was overwhelmed with the universal joy of the fact that I was finally here, on my uniform and shoulder straps
Marina Mkrtchyan
artillery brigade

At Marina in the first part, they looked at her with distrust, who were condescending, who with a grin, not taking it seriously. Externally, perhaps, the female figure in a bullet-proof vest and field uniforms weighing 10 kilograms is comic, she admits. Most of the colleagues were convinced that contract service was not a woman’s business: but which warrior girl of this fragile girl, what kind of toys did she find for herself? 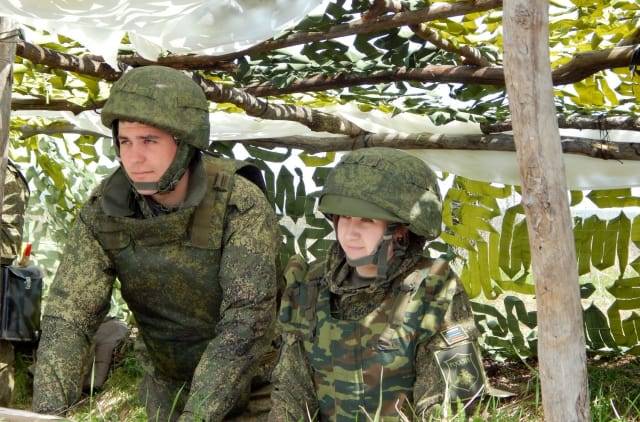 Marina Mkrtchyan at the brigade exercises

Marina says that only after a while (especially after the first field exit), the co-workers changed their attitude. They made sure that the girl carries with them all the difficulties of the service and knows how to carry out the tasks assigned.

It was always easy for me to communicate with the opposite sex, and as a child I don’t remember playing with dolls. I appeal to the officers for help in obtaining knowledge, constantly studying special literature - at work and at home. And I really like it. Although embarrassing when commanders set an example to others
Marina Mkrtchyan
artillery brigade

The military is the embodiment of strength, self-confidence, these are the people you can always rely on, she said. An example is her grandfather and uncle who dedicated their lives to military service. Marina came to the brigade with a law degree from a citizen. She moved to Adygea from another region, breaking away from her relatives.

227 th Tallinn Red Banner, the Order of Suvorov artillery brigade recreated six months ago. Yet it is not without reason called the legendary.

This military unit became famous during the Great Patriotic War and in two Chechen campaigns. In 2009, it was disbanded and a base for storing and repairing equipment was created on its basis. Now, according to military experts, this is one of the most powerful units of the Russian army stationed in the south of the country.

History the unit originates from the 1943 of the cannon artillery brigade formed in January of the 81 of the year, which passed almost the entire Great Patriotic War as part of the Leningrad Front, completing it with the 2 of Belarus. For military services, part of them was awarded the Order of Suvorov and the Red Banner, and for the liberation of Tallinn received the honorary title "Tallinn". After the war ended, the brigade was relocated to Leninakan, where it was reformed into a cannon regiment.

In 1992, they transferred to Uryupinsk and again deployed to the 81 artillery brigade. She joined the 8 Guards Army Corps, which was later commanded by Lev Rokhlin. For their courage and heroism in the hot spots of 143, the officer and ensign were awarded orders and medals.

In 2009, then-Russian Defense Minister Anatoly Serdyukov announced reform and ordered the disbanding of the legendary art brigade, creating on its basis a base for storing and repairing weapons and military equipment. And it would be possible to inscribe the military way of the brigade in history, but by the decision of the Supreme Commander 1 of the Russian Federation in December 2016, the newly restored military unit was deployed in the Southern Military District. The task was to make the 227 artillery brigade in Adygea one of the most powerful in the Armed Forces of the country.

Today we not only honor the Code of the officer of the times of the tsarist empire, the patriotism of the times of the great USSR, and multiply these glorious traditions. And if there were no these roots, we would not be so afraid and so much about us would not be written on the Internet - starting from intelligence data of foreign countries and ending directly with our media
Alexander Baranik
commander of the unit, colonel

In addition to the Msta long-range howitzers, Uragan multiple launch rocket systems (MLRS) and anti-tank complexes, the art brigade is equipped with reconnaissance and automated control systems. According to the newspaper "Izvestia", in the future it should get the newest self-propelled howitzer "Coalition" and the upgraded MLRS "Uragan-M".

The personnel of the brigade is a powerful team, there are a lot of military men who have gone through hot spots and have experience in combat operations. They are here 90%. The exceptions are conscripts. Most of them are recruited from the regions of the south of Russia, but there are also natives of Siberia and Moscow region. Missile forces and artillery conscripts are selected according to certain criteria, including the basic level of knowledge and the education gained in the family. With such weapons, it is important to be a responsible person, in addition to a common outlook, to be friends with mathematics, geometry and physics. Within six months, soldiers are required to perform combat missions.

A conscript should at least very well, if not perfectly, possess technical sciences. And to have the desire to serve in honor, worthy of a soldier of the Russian army. This is not a stilted phrase, the honor of the soldier of Russia is here in the first place.
Alexander Baranik
commander of the unit, colonel

No footwear and notions

The territory of the part is well equipped for everyday life. The dormitory-style hostel is a neat high-rise building where recruits live in the cockpits for six people. Everything is here - from the medical station to the lovely gazebos for rest.

Most recruits complain of blisters. Boots and foot wrappers remained in the distant army past, and callosity still cannot be avoided until their legs get used to the berets
Marina Mingaleeva
medical officer on duty, sergeant

Psychologist of the brigade Zarema Stash notes that at the beginning of the service the recruits have problems with adaptation: it is difficult to get used to the new conditions of life, the changed situation, and there is an adjustment of new social ties away from home. That is why she works with recruits individually and in groups.

Each call is examined in parts in three stages, and then - as needed. For example, when soldiers are allowed to serve with weapons. At this stage, everything is checked - the psychological state, the personal qualities of the fighter and the environment from which he came to the army. In accordance with the results, the psychologist makes recommendations on the distribution of soldiers in different units, given their abilities and characteristics, professional skills.

According to the results of testing, individual or group correction, psychological, and relaxation trainings are conducted. Today, in the division of the art brigade, as in the entire Russian army, psychologists from all sides are studying the relationship of military personnel in the team, identifying the index of group cohesion, formal and informal leaders. The psychologist also works with the families of recruits whose parents sometimes need as many as draftees psychological support, says Stash. She also notes that the non-statutory relations have become obsolete with the transition of the Russian army for a one-year conscription period.

The brigade commander is attentive to working with personnel, especially with draftees. All arrivals are immediately warned here: we have no place for conflicts, including disagreements based on nationality. Zemlechestvo is not welcome here, everyone came to serve on equal terms, the task for all is the same - responsibility and performance of official duties
Zarema Stash
psychologist of art brigade

The territory of the unit seems deserted - everything is in the classroom. Platz is also empty, a solemn march under the orchestra takes place in the early morning.

The skill martial marching here is taught, as everywhere, but for this there is a designated clock. While there is silence - before the soldiers' lunch.

Boys, like children, love chicken meat, meatballs, meatballs. From porridge do not refuse. Everyone likes juices and sweets. They ask for an additive, although the portions are not small, but we always take it into account
Irina Kudritskaya
cook, manufacturing canteen

Above the entrance to the dining room is an electronic menu, where everything that is offered to the fighters for breakfast, lunch and dinner. The list is varied: the first two and three meat dishes, side dishes, vegetable salads, compotes and juices. For dinner, cooks prepare two kinds of fish, two side dishes and salads. In general, a balanced diet that at home, in the civilian world, the younger generation does not seek to abide by.

Every morning begins to the sounds of the Petrovsky march of the Life Guards Preobrazhensky Regiment, the one who personifies the centuries-old history of the victories of the Russian army. Marsh gives the gunners the mood for the whole day, the military admit. The daily routine, according to the military regulations, is the same as everywhere else. For example, training in a combat training program twice a day.

Sometimes quite silly boys come to the service. When I say: “You don’t recognize yourself and each other in three months,” they don’t believe. For young men, service in the army is only for the benefit, it contributes to the formation of purposefulness, disciplines, fosters personal responsibility, the ability to achieve goals regardless of the circumstances. All these qualities they need in later life
Zarema Stash
psychologist of art brigade

The procedure for everyone is simple: building, sports exercises, breakfast, classes, lunch, classes again, dinner, after which there are a couple of hours of free time. Each soldier plans his own evening hours of rest. For some, the priority is to build physical strength and sports training, someone prefers to improve intellectually and prefers chess or books, watches television news channels, and sometimes just movies. There is not much time - until the evening building, after which - hang up.

Even for a year of service, many pass this school successfully. It is no coincidence that more than half of the draftees, according to polls by a psychologist, decide to serve under a contract or enroll in military schools. Not so long ago, such a fact was rare for Russian demobilized guys in Russia.