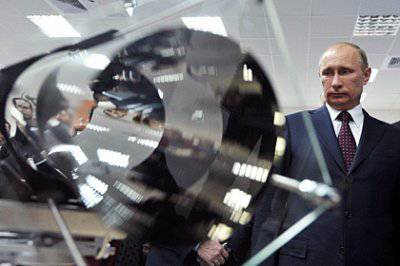 Year 1959. Nikita Khrushchev informs US Vice President Nixon that the USSR has funds at its disposal that will have dire consequences for the United States. And at the same time he applied the phrase, which was then scattered around the world: “We will show you fucking mother!” And Kuz'kin's mother (Soviet hydrogen bomb) then really made not only Richard Nixon and the United States shudder, but the whole world.

Year 2012. Historyas it is known, it has a property of repeating itself in some way. And this kind of repetition of history took place last week in Russian Sarov, where Russian Prime Minister Vladimir Putin held a so-called round table on national security issues. Speaking about the possible overcoming of the American missile defense system in Europe, Putin uttered a mysterious phrase that Russia has "something" that will sober the Americans and return to the negotiating table. Putin, of course, was not Khrushchev: he didn’t take off the boot, and he didn’t bang on the table (tribune), but the message was quite intelligible, so that Western “partners” would understand that there was no need to wait for “silence of the lambs” from Moscow. Foreign media here began to analyze the words of the candidate for the highest post in the Russian Federation. Or not to analyze, but rather to guess at the tea leaves, what Putin is going to present if he becomes the Russian president again. At the same time, it is precisely the analogy with 1959 to the West that doesn’t give peace, unequivocally. Perhaps, the American special services - Europeans are whispering on the sidelines - profukali that moment when Russia began to create weaponswhich can turn the entire missile defense system into ashes ... Perhaps while the eyes were fixed on Ahmadinejad and Assad, the treacherous Putin in underground bunkers himself was engaged in creating weapons of "universal destruction" ... In general, neither give nor take - the classical hysteria about that Russia just wants to restore global parity.

At the Sarov round table, Putin expressed the view that the United States does not want to engage in active contacts on the development of a solution that suits both parties. Americans perceive Russia's concern, apparently, just like a butcher enters into the position of his victim, continuing to hone the ax. In the past 20 years alone, the West seems to have forgotten that the “victim” that he chose for himself might not want to incline his head to the altar of global hegemony of one global player.

Putin hastened to remind that now the Russian Federation has the means that are able to overcome the American missile defense system without any particular difficulties, therefore finding this system near the Russian borders looks, if not useless, then ineffective. The prime minister also reminded that Russian troops are consistently receiving new weapons systems that are part of a large nuclear shield. In particular, the prime minister also spoke out about the end of all the failures that pursued such Russian weapons as the Bulava.

From the words of Putin, someone could have concluded that a new arms race was starting. Let me, and perhaps this race ever ended in the world. But don't be a arms race, we would still run with a quiver of arrows and a bow at the ready ... This may seem inhuman, but the arms race is one of the engines of human civilization. If you look at most modern technical devices, all of them, one way or another, are connected with the military industry. Either initially they were conceived as a service of military strategy, or later they migrated “to the citizen”. Take at least the same “peaceful atom” that a man learned to use peacefully only after he wiped out a couple of Japanese cities from the ground ... Therefore, all Western accusations of Putin that he again imposes an arms race are meaningless. The arms race is imposed once and for all by no means by the current generation of leaders. Putin only sends a message that if you want to be there, then be so kind as to: “the show goes on.”

Well, tell me, is there a state in the world that would not want to acquire the latest weapon systems? And let this state be de jure three times neutral, all the same, its leaders have no-no and yes there will be wishes to place something on their territory - from the series of the “mother-in-law”, so that others will not have to go to someone else's kitchen garden for master cucumbers ... And if there is a desire, but there is no such possibility, then it remains to accuse Putin of the fact that he, like one of his predecessors, "Mr. Khrushchev", is again trying to intimidate the entire "progressive" world with its top-secret weapons.

Yes, even those who, apart from the rusty Pugach and the clearing towards the NATO positions, have nothing at all in the asset, are trying to threaten us. So why Russia does not declare its vision of the situation.

And you say: spears, arrows, disarmament ...