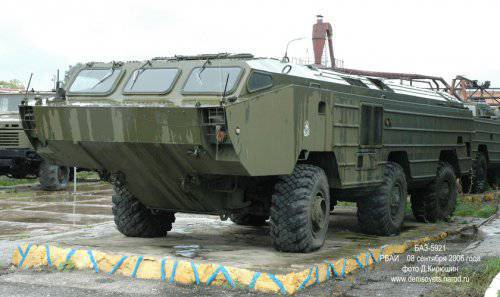 In accordance with the Decree of the Council of Ministers of the USSR from October 27 of 1960, the development of the 9K33 “Osa” air defense system began (the former name was “Ellipsoid”). For the first time, the task was to develop an autonomous complex with placement on one self-propelled floating chassis (combat vehicle) of all combat vehicles, including radar stations and a launcher with missiles, and means of communication, navigation and toporavizka, control, as well as power supplies.

The brilliant successes achieved in our country at the end of the fifties in the field of creation (mainly under the guidance of VA Grachev) of wheel all-terrain vehicles determined the choice of one of the models of floating armored personnel carriers developed for motorized rifle units of several design bureaus as a prototype for the OSA air defense system on a competitive basis in the late fifties - early sixties.

As early as January 1961, the ZIL design bureau refused to further participate in the OSA air defense system, since the carrying capacity of the ZIL-153 - 1,8 chassis it was developing was clearly insufficient to accommodate PU missiles and complex systems. For the same reason, the winner of the armored personnel carrier competition, the BTR-60P of the Gorky Automobile Plant, did not fit. Over the next few years, work was carried out in relation to the 1040 Object wheel chassis, created on the basis of the 1015 Object Object, developed by the designers of the Kutaisi Automobile Plant (KAZ) of the Economic Council of the Georgian SSR in collaboration with specialists of the Military Academy of Armored Forces.

Since the Kutaisi plant’s BTR project had a carrying capacity of all 3,5 tons, to accommodate at least 4,3 tons of complex equipment, it was decided to exclude machine gun weapons and switch to the use of a light diesel engine with an 180 horsepower. instead of the same engine used on the prototype in the 220 hp The wheeled chassis of the Mytishchi MMZ-560 plant was also considered, but its use was associated with an unacceptable increase in the mass of the complex to 19 t.

In 1966, the department of the chief designer of the Bryansk Automobile Plant together with the Scientific Research Electromechanical Institute (NIEMI, Moscow) began to create a family of special floating chassis BAZ-5937, -5938 and 5939 for the Osa anti-aircraft missile system equipped with water cannons, which allowed them to travel by water, powerful diesel engine, navigation, topographic location, life support, communications and power supply of the complex (from the gas turbine unit and from the power engine's power take-off generator). In 1971, their mass production began, and the complex itself was put into service. The launch of the BAZ-5937 and BAZ-5939 chassis continued until the 1990 year. "Osu" was supplied to 25 countries of the world, and in the Armed Forces of Russia it is exploited to this day.

The 5937 and 5939 models with the 6x6 wheel formula have a waterproof steel case with a control cabin located in the nose, a cargo compartment in the middle, and an engine compartment in the aft. The required speed afloat is supported by two jet propulsion. The almost uniform location of the axles along the length of the machine increased the geometric permeability and gave the optimal distribution of mass on the wheels. The wheels of the extreme axles are steering, which reduced the turning radius and reduced the resistance to movement in it.

The car received a six-cylinder 300-strong diesel 5Д20Б-300Б. A mechanical gearbox transmits the motor's force to a transfer case equipped with a built-in differential separating the drives of the right and left sides. Wheel suspension - independent, torsion bar on the wishbone. The machine is equipped with a system for adjusting air pressure in wide-profile tires of the dimension 1200х500-508. 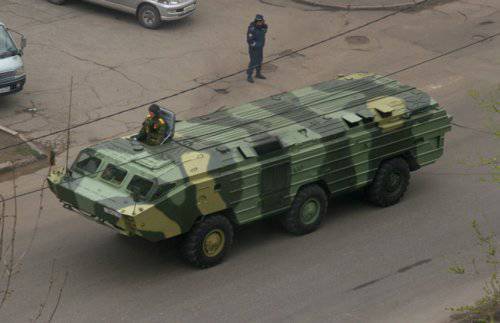 Analyzing the situation, the plant's specialists came to the conclusion that amphibians can be used in areas of natural disasters, such as floods. The BAZ-5937 was the most suitable for this.

The machine has a fairly spacious cargo platform. It freely accommodates an ambulance car, a small class bus, or a similar car. Self-propelled vehicles in the cargo compartment amphibious breaks on special ramps. In addition, it is possible to transport people and various cargoes weighing up to 7,5 tons. A lot of such vehicles was delivered to the rescue service of Estonia.