Black top, white bottom. How the American censorship arranged circumcision interview with the president of Russia

7 2017 June
54
Attention! Attention! Watch everyone! A full hour on NBCNews! Interview with Russian President Vladimir Putin! Only in prime time! Megin Kelly - black top, white bottom - and the "dictator" Putin in the telyashchike! 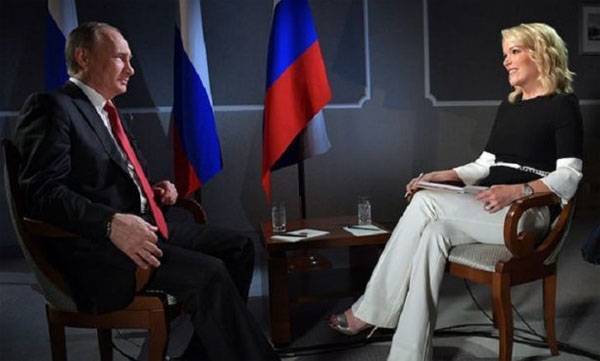 For almost a day, this kind of advertising was on the American channel, the ratings of which were beaten by the time of the broadcast of the interview with Vladimir Putin historical records. This suggests that among American viewers, interest is huge both directly in the personality of the Russian president (both with a minus sign and a plus sign), and in what way Putin is going to answer American questions-claims regarding the administration of domestic and foreign policy.

Attention is also drawn to the fact that the level of popularity of political shows or interviews with politicians among American viewers is much lower than entertainment programs. But the interview with Putin, presented as “hot”, led to the fact that on that day this program turned out to be the most rated, and so rated, that it is unlikely that in the near future the record for the number of viewers watching NBCNews broadcasts would be surpassed. True, they expected more. But in the end it turned out like in that joke: he will eat something, but who can give it to him. So the American audience was not allowed ...

Here is the Russian version of the interview ("Russia 24"):


The most interesting thing is that Magin Kelly actually interviewed the Russian president, that the recording of the conversation was really conducted by NBC operators, only the audience of the western TV channel saw and heard almost two times less than what they should have seen and heard about Vladimir Putin and Vladimir Putin’s mouth .

The fact is that Magin Kelly and the team of the channel she represented acted as "ritual trimmers." And instead of the full version of the conversation with Vladimir Putin in the country with the freedom of speech protected as the pupil of the eye, a cut-off copy of the interview was aired. And cut off so that the American schemers during the process managed to cut out from the recording of an interview with Putin everything that somehow exposed the negative in the United States itself, and that could somehow tell the viewer in the United States that Putin is not only the president, but also an ordinary person. It was not in the "American version" that the US intelligence services actually eliminated the social movement "Occupy Wall Street", nor the statements of the President of the Russian Federation about his brother buried at the Piskaryovsky cemetery in Leningrad. And there were 11 minutes of ether, in which the words of Ms. Kelly were almost more than the words of Vladimir Putin ...

Apparently, the American journalist seriously scared Vladimir Putin’s statement that if Flynn was forced to resign from the councilors just because he sat at the RT anniversary party for several minutes sitting at the same table with Russian President Vladimir Putin, then in the US a journalist who worked with Putin for two days, "they can put them in jail at all." In the end, it came out from American journalists as in the worst media variations of the USSR, when "Comrade Brezhnev finished second, and the American president was the last one." As they say, they did not seem to have lied, but presented, as is often the case in today's Western realities, everything is as beneficial for those giving money to the same NBC channel.

Here is a comment from Vladimir Solovyov on Radio Vesti FM about what turned into an interview with the President of Russia on NBC:


By the way, in one of News As far as Kelly’s conversation with Putin was concerned, the question was already raised during the economic forum about how many international forums could be recalled in Washington, New York, Brussels or London, where the Russian journalist would be invited as a main moderator of the forum, offhand, Margarita Simonyan? .. Something is not recalled ... And Russian journalists are not invited to such events for the simple reason that the present West, as noted above, in terms of “freedom of speech” decided to catch up and overtake the USSR into the most “censored ny years. That is, all the worst that at one time in the Soviet Union was, the modern West decided to take as a guide to action. He fences off, fences off, fences off and against this background he tries to calm himself down with phrases in the style: “Russia is isolated”. Gentlemen, partners, well, stop hanging noodles on your own ears and on the ears of your fellow citizens - the American audience did not eat too much burgers and drank cola to protect themselves from the opportunity to get acquainted with the full version of the same interview with Magin Kelly and Vladimir Putin. The same RT will convey not only to the Americans, but also to hundreds of millions of citizens of different countries of the world that they asked the President of Russia, and that the President of Russia answered this - he will bring it without “circumcisions”, off-screen texts and other disturbances beneficial to the interviewer.

And it seems that a harshly censored interview with Putin in the West has the opposite effect. Adequately-minded citizens are aware that the interview could not last the entire 10-11 minutes, and therefore various Internet sites in the same States have already published the full text of the conversation of the American blonde Kelly with the Russian president, and read the interview. And the same NBC and other fake-news with the stubbornness of a ram continue to beat their horns on the wall, on which they see their own shadow, but they draw pictures of what is “aggressive Russia” in front of them, ready to interfere in the elections, hackers to hack, and compromising on trump collect. Stop, paranoia! Or is it not treated? ..