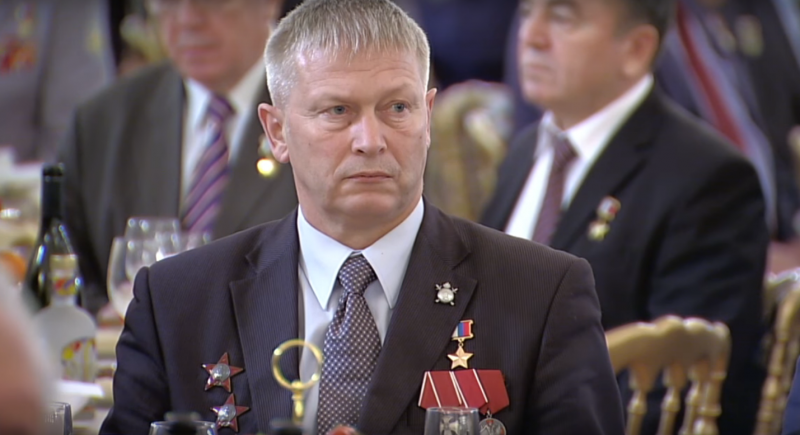 Andrei Troshev, a police colonel in the reserve and a military officer. Even after retiring from law enforcement agencies, he could not stand aside and went to Syria to defend the interests of Russia in the ranks of volunteers. Troshev's biography is like a true officer: “Soul to God, duty to the Fatherland, honor to no one!”

A veteran of the police special forces, a paratrooper artilleryman, a veteran of Afghanistan and Chechnya, a gentleman of two orders of the Red Star and orders of Courage. His military career began within the walls of the Leningrad Artillery School. Years of study passed and he was sent to Afghanistan. The Afghan war then called on many, and now Troshev commanded a self-propelled artillery battery in the mid-eighties.

The Chechen campaign also did not pass by. Troshev had to apply the combat experience gained in the Caucasus from the times of confrontation with the mojahedin.

Then years of service in the Leningrad Military District were drawn. But even after his dismissal from the ranks of the Armed Forces, Troshev continued to serve in the St. Petersburg riot police and SOBR of the Directorate of the Ministry of Internal Affairs for the North-West.

Worthy officer, sweat and deserved their awards. So spoke about him those who served with him shoulder to shoulder. Andrei Troshev, which is indicative, retired from the post of commander of the SOBR. In fact, after his retirement, the GU MVD in the North-West Federal District did not last long, being eliminated in the spring of 2014.

The service in the army and the police left a state awards to the combat officer. In the civilian jacket of Andrei Troshev, two orders of the Red Star and two Orders of Courage are burning with fire. Awards for courage, dedication and courage, shown in the fight against crime, for determination and courage in the performance of military and official duty, with the risk to life.

And there were risks to life, and some more ... Not everyone returned home from Afghanistan, and Chechnya destroyed many lives of Russian soldiers and officers. Foreign mercenaries and terrorists in those years were walking around the outskirts of Russia, sowing confusion in Chechnya. Nobody thought that the situation would repeat and the terrorists, crushed after the Chechen campaign, would again raise their heads.

Unfortunately, distant Syria flared up. The terrorist groups have set a goal not only to take control of the Middle East, but also to extend their influence to the Russian regions. The goal of the Islamic State militants was to create the World Caliphate, and it was planned to create it, including the territories of the Russian Caucasus. This has become a direct threat to the national security of Russia, public security and the lives of our citizens.

Acts of terrorism again became a reality. The Russian special services prevent them by arresting the organizers, perpetrators and accomplices of the terrorists, but the threat still remains. The fish rots from the head and this head needs to be cut off, destroying the threat to Russia completely. In an effort to protect their country from international terrorism, Russian volunteers reached for Syria. Troshev was among them.

Yes, after retirement, Andrei Troshev, as a combat officer, even if in reserve, could not sit at home quietly, watching from the outside the events taking place in the country and in the world. Initially, in the summer of 2016, he headed the St. Petersburg regional public organization, League of Protecting the Interests of Veterans of Local Wars and Military Conflicts, in order to support those who had a hard time retiring.

To provide people with social support, to help in resolving issues related to appeals to the authorities. But this relatively quiet life did not last long. Syrian events and the threat of international terrorism have brought him back into service, not out of duty, but in spirit and conviction.

So Andrei Troshev and joined the ranks of Russian volunteers who do not want to allow extremists to the borders of Russia. Who, if not him, knows that the enemy must be beaten on distant approaches, eliminating the threat to his family, his people, his homeland?

And he beat him, participating in the storming of the Syrian Palmyra in the spring of 2016, freeing the city and its environs with ISIS terrorists with Russian volunteers. Then Andrei Troshev, in fact, reminded us once again that the heroism of our people is not only in ancient legends and epics.

He remained with us now, at a time when Russian volunteers are ready to defend the interests of Russia and our people, demonstrating selflessness and devotion to the Motherland. It does not matter whether you are a soldier or a pensioner, a civilian or a student: everyone makes their own choice. Troshev made his choice: as a military officer and a citizen of his country.