The prince disappointed himself: Muhammad ibn Salman was unable to perform an impossible task

6 2017 June
27
Prince ibn Salman returned from Moscow disappointed, according to foreign analysts from the East. Referring to the "leak" from the Kremlin, some publications indicate that Mr. Ibn Salman was able to fail all negotiations. 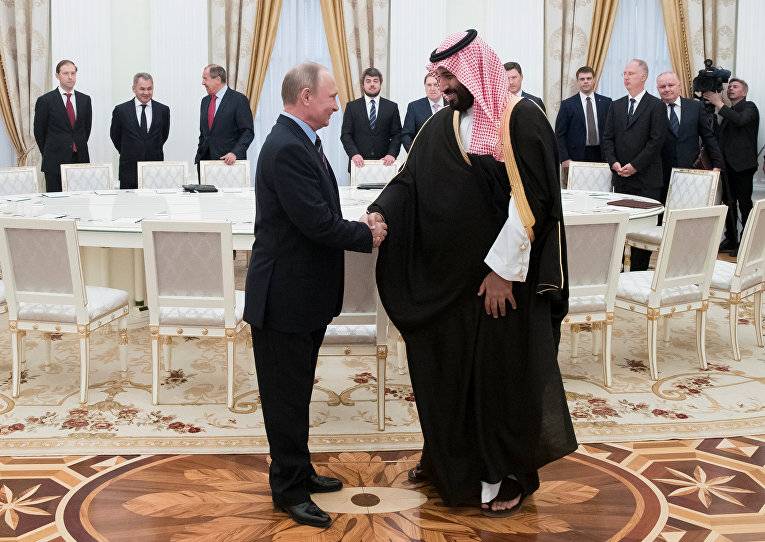 After the appearance of Donald Trump and the conference in Riyadh, Prince Ibn Salman, who cherished a clear, rather than secret, dream of “domination” throughout the Middle East, was amazed to discover that events were heading in a different way.

Ali Bashar talks about this in the Iraqi edition of Sky Press (the source of the Russian translation is "InoSMI").

Mr. Trump in his unpredictable manner suddenly abandoned his promises. According to the “sources”, he kindly informed Mr. Ibn Salman that the game that Saudi Arabia is trying to play is not so simple, and there must be other countries in the world with a similar opinion. And these countries have their own conditions and financial requirements. After such a transparent hint (whether he really was, we can hardly find out), the prince decided, indicates A. Bashar, that he would have to hold dozens of summits: in this way he would be able to “please everyone”.

"He immediately goes to Moscow to Vladimir Putin, the second and most dangerous player in this game, trying to win over the Russians on the issue of forming a coalition in which Saudi Arabia will take the lead," the commentator writes. But bad luck: V. V. Putin is a “skillful president,” and he does not want his state to become a toy acquired by the Saudis, albeit for big money.

Referring to the "rumors", the journalist talks about the prince’s attempt to cancel a major deal that Riyadh had previously conducted with Ankara. This is a deal to buy "warships and aircraft carriers." One of the terms of the deal for Turkey was support for the recent actions of Saudi Arabia in the region.

The result, which the prince has achieved: Saudi Arabia has lost an ally in the person of Erdogan.

Further, the journalist writes about the "leakage of information from the Kremlin." According to the “leak”, all negotiations of the Saudi prince failed.

Ali Bashara notes that, according to press reports, the Russian president "set impracticable conditions that the prince was unable to fulfill."

What are these conditions? Yes, everything is simple: after the announcement of Saudi Arabia to cancel the deal with Turkey, President Putin demanded to maintain the position of Assad in Syria.

And this ibn Salman found it an obstacle to his own ambitions associated with limiting the regional influence of Iran.

On this occasion, the journalist notes, the Russian ambassador in Riyadh spoke out, calling the actions of Saudi Arabia “suicide”.

We can assume, we add, that Donald Trump has very far-sightedly made it clear to the Saudi princes that international politics is much more subtle than even the East. When someone tries to impose conditions on others and manipulate transactions, starting from empty ambitions, others show this someone his real place.

In addition, the prince made it clear to the whole world that Saudi Arabia is a very unreliable commercial partner. However, not for the first time.