2 2017 June
119
As it should be in any court, there are lawyers, prosecutors and jurors: Dmitry Kulikov and Nikolai Zlobin. All participating in the process are patriots of Russia, only one “for the whites”, others - “for the red”, “for Stalin” and “against Stalin”. Zlobin is even a Russian-American patriot, with dual citizenship, but this, as it were, adds to him objectivity: the very exclusive America is present in his face in this project. Maybe he was conceived as an understanding of our stories, but it turned out the court and even the show. 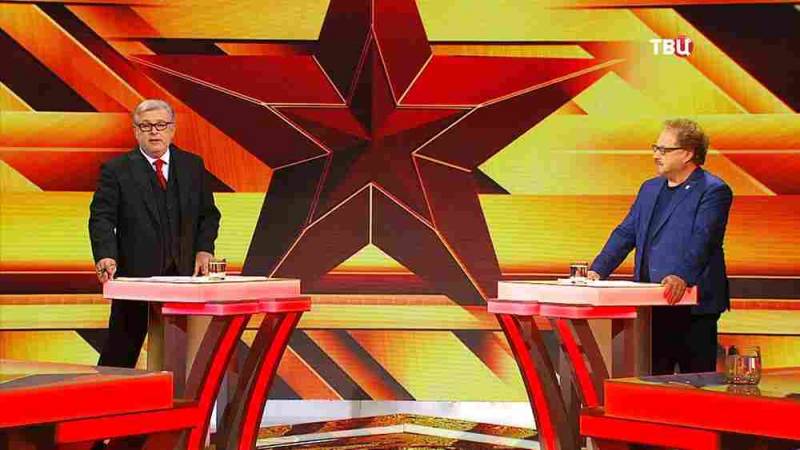 What do we see? Endless disputes: where is the truth, and where is the lie of our historians, about the particulars, about the numbers, about the missed opportunities, about the tear of the child and the unburied soldier - with pharisaic and deceitful indignations. It has long been said: do not judge, but you will not be judged: the victims of the “perestroika” of the USSR and the 90s will also judge you. Unfortunately, today we have no historians-philosophers of the scale of Karamzin, Klyuchevsky, Gumilev, A. Zinoviev, who could historically and authoritatively comprehend the twentieth century of Russia.

Gustave Flaubert said about the discussions around the events of the French Revolution: "Hatred of historical persons is nonsense." She is a lot in this discussion. Karamzin taught: “The ancestors were not more stupid than you,” but our experts do not know Karamzin. In pursuit of the scandalous details of the story, they do not attach importance to many fundamental facts, which are therefore left out of discussion, and their ancestors look like fools to them.

The Red Project, although it is more correct to say, the USSR, was part of the Western world communist project. In the West, he failed, in Russia, the weakest link of world powers, he won a political victory. It must always be remembered that this project was western and global in nature, since it influenced in the most serious way all stages of its implementation in the USSR.

In all the vicissitudes of the USSR, these moments played a big role, the party leaders of all deviations always remembered and argued about them, but this is unimportant for our experts. Therefore, for them, Lenin, Trotsky, Stalin, Khrushchev and his successors — all are Russian communists, and it is not clear why they were so hostile to each other, because everything worked as if for the sake of the USSR. It turns out - they were hostile because of their stupidity and cruelty. However, our experts are stupid here.

Today it is clear that the “Red Project” was a completely utopian, attempt to build a new Tower of Babel. The first communist builders believed in his scientific Marxist foundations; therefore, they were atheistly disregarding religious, philosophical and historical warnings, and thought that this had nothing to do with them. They are scientifically wrong, this can still be understood.

But how to understand our researchers and judges, who, it turns out, still believe in this utopia, or diligently do not notice it, because they judge the USSR from the height of this very utopia: they promised to build a society of freedom, justice and abundance, and built a Gulag ... And who then our researchers? After the victory of the revolution, utopias are impossible, but repressions are inevitable, as the French revolution has already shown. However, our researchers proceed from utopia, believe in utopia, and discard the actual story.

Lenin and Stalin, continuing to speak the correct "red" slogans, in fact were the first counter-revolutionaries, conducted a fundamental revision of the communist utopia, so she survived the whole world in defiance. The last word of Lenin was NEP, the actual return to market relations. Lenin introduced the NEP with all the power of his authority, and saved the revolution from economic collapse. Although many communists put party membership cards on the table in the days of the NEP and shot, because they did not understand why they fought in the Civil War.

Stalin rejected the idea of ​​a world revolution, threw all the resources of the country to create the material and technical basis of socialism, but in a single Russia-USSR. Neither Lenin nor Stalin could explain the essence of these decisions to the illiterate party masses, they would not understand them. And they talked about the creative development of Marxism and the fight against counterrevolution, which included all those who opposed them.

In general, Stalin began to revive the imperial traditions of Russia: pre-revolutionary culture headed by Pushkin, rejecting the post-revolutionary proletcult, relaxed the Church, restored the military history of Russia, all its commanders, and officer shoulder straps to the military, creatively developing Marxism! In 1934, for the first time, Stalin spoke about Soviet patriotism; before that, the world revolution was the homeland of the workers and peasants of the USSR! We can say at the last moment: before Hitler's attack, 7 years remained!

Trotsky understood everything, a theorist and a world permanent revolutionary, and his comrades: what did he threaten, and what did Stalin reject. Thus, the conflict between the Stalinist guards and the world-Trotskyist wing in the party was inevitable, and it was resolved by repression, as is customary in revolutionary times. If Trotsky and his supporters had won, the Stalinists would have been in the GULAG.

Stalin’s secretary, Bazhanov, who escaped to the West, in his memoirs, “Stalin from a short distance,” wrote: “But I’m not sure if Trotsky would have been if Stalin had been somehow removed from power, a less bloodthirsty tyrant than Stalin.” But Russia would become the firewood for fomenting its permanent world revolution: “Trotsky wanted to carry out a revolution against the Stalinist regime of power. Trotsky suggested that all left defend the USSR in the approaching war with Germany - to defend the October revolution. " That is, Trotsky proposed using the permanent world revolution to fight Hitler's fascism. Adventure is a weak definition for such a policy, it is a disaster!

Stalin, as an activist, was born in the flames of civil war, had revolutionary ethics, aesthetics and morality, therefore, when they come to judge him from the heights of humanism and democracy, they look either fools or scoundrels: you yourself would be in this whirlwind of revolution ? However, the Bandera Nazi revolution, with murders, repressions and secret prisons, does not disturb our liberal noses at all.

A revolution always creates chaos, therefore the appearance of a dictator’s figure, taming chaos, is inevitable. In the French Revolution, Napoleon became the dictator, in the Russian Revolution - Stalin. By the way, French historians put these figures in one row.

A man of civil war, Stalin continued it later on the external and internal fronts of the revolution. The gulag is a camp for prisoners in this war, and it was abolished when the revolution ended, in 1953, in connection with the death of Stalin. And came the post-revolutionary times of Khrushchev ...

The great justification of Stalin is a victory in the Great Patriotic War. And the creation of a material and technical base for this victory is also his merit. When the liberals, at the suggestion of their Western authorities, deny it, they mock at it, they show their intellectual stupidity and baseness: you live only because Stalin won this war. And in the 30-s defeated the Trotskyists.

The Russian revolution is also called egalitarian (the social lower classes of society have become its top). After the highly educated Leninist elite of revolutionaries passed away, for various reasons, this was fully reflected. It was not for nothing that at the end of his life Lenin called out: “To study, to study and once again to study,” but here you can’t help with appeals: any fruit must ripen ...

In the "Red Project" they spoke correctly about the small mind of Stalin's successors, starting with Khrushchev. After Stalin, the egalitarian revolution began to develop on its own social base: the era of simple solutions and the “fucking mother” began: poorly educated people are always prone to simple solutions to any questions.

However, Nikita Khrushchev, because of his ignorance, brought the communist utopia back to life: struggling with Stalinism and reviving the foundations of Marxism-Leninism, he began to fight the West for world peace and squander the inheritance of Stalin’s USSR around the world. In fact, he began to carry out the program of Trotsky: he threw the resources of the USSR into the furnace of the world revolution. Formally, Trotsky was the most consistent Marxist.

Khrushchev was so simple that he even set the dates: he promised the arrival of communism in 1980 year! And the last priest promised to show. If he had at least a parish education, he would have known that the Church never speaks about terms. Stalin had an Orthodox seminary behind his shoulders, a university education in comparison with his successors, by the way, he said: “Much rubbish will be inflicted on my grave,” he nevertheless had the gift of foresight ...

Khrushchev's return to life of the world communist utopia created the prerequisites for the collapse of the USSR. The egalitarian, illiterate elite of the party was unable to grasp the scale of the problems facing the country. The Moscow Philosophical Circle, which was headed by the front-line soldier A.Zinoviev, soberly assessed the situation, offered alternatives, but was declared dissident and defeated, A.Zinoviev himself was sent to the West.

... In the history of such revolutionary events happened more than once: "Cruel century - cruel hearts", - said the Poet long ago, this is the most accurate and capacious definition of the "Red Project" in Russia. The history is cyclical, all the facts speak for it, but our experts, for the most part, follow the western progressive theory which seeks progress everywhere, the top of which is Western democracy today, that is, the West. In other words, the West is building a new Tower of Babel, Western communism, according to Trotsky’s covenant, whose successors the American neocons openly call themselves. After all, in essence, communism is democracy, the USSR was a Soviet democracy ...

Democracy, how much blood has already been spilled on its altar ... Paraphrasing Leo Tolstoy, we can say that democracy today is the last refuge of scoundrels. When there is nothing to cover, they say: we have a democracy. In the "Red Project" Polish Marshal Pilsudski declared democracy, and this justified his concentration camps for the Red Army. So the liberals and the other West will soon be acquitted of Hitler: he, too, was democratically elected in comparison with Stalin.

Ctrl Enter
Noticed a mistake Highlight text and press. Ctrl + Enter
We are
After the filming of a talk show on the TVC, Ukrainian "activist" was beaten up, justifying the burning of people in the House of Trade Unions of OdessaMarshal of the Soviet Union Viktor Kulikov died in Moscow
119 comments
Information
Dear reader, to leave comments on the publication, you must to register.