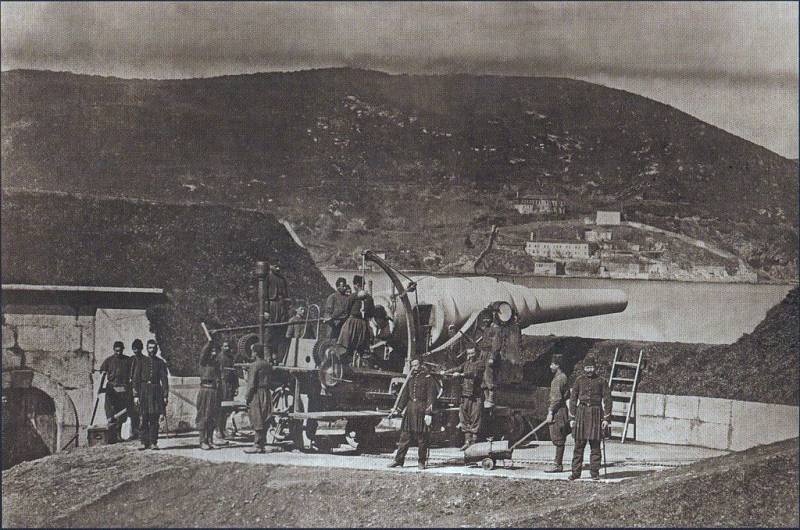 The military-political leadership of the Ottoman Empire also considered the main Balkan theater. He was transferred to the best and most of the Turkish army. However, initially the main forces of the Turkish army were associated with the struggle against the Balkan peoples (the uprising in Bosnia and Herzegovina, the war with Serbia and Montenegro). Therefore, the Port could not count on a quantitative superiority, as in the former Russian-Turkish wars, and even more so a qualitative superiority over the Russian troops. As a result, the Ottomans decided to adhere to active defense, relying on the fortress, trying to avoid defeating the main forces in an open battle and stretching Russian communications, dragging out the war in the hope of supporting the West.


It was planned to make full use of such excellent natural frontiers, as the Danube and the Balkan mountain range. In the prescription of the Sultan to the Minister of War from 8 (20) on April 1877, it was said: “Since the entire Danube defensive line from Machin to Vidin cannot be kept, then with the onset of the war the enemy should be lured into the country and give him battle. Regarding further hostilities, the Ottomans reasoned like this: if the Russians are defeated, then they can be thrown over the Danube and pursued to the Prut, if the Turkish army is defeated, then it is necessary to withdraw to the line of the Balkan Mountains, to keep Varna and Burgas area of ​​the Balkans, "trying not to allow the enemy to spread."

In order to prepare strong counterstrikes, the Turkish command formed large groups in the quadrangle of the fortresses — Silistra, Ruschuk, Shumla, and Varna (this group hid from the north-east by occupying the Kyustendzhe-Chernovody line). . That is, it turned out that the Turkish strike groups were on the flanks of the advancing Russian army. Counterstrikes were planned after the Russian army was drained of blood and exhausted at the second strategic defensive line, the Balkan Mountains. At this point, strikes on the flanks and rear of the Russian army were to lead, according to the Ottoman command, to the defeat and encirclement of the main forces of the Russian army. The grouping of the forces of the Turkish army in northern Bulgaria, as noted by the German military theorist von der Golts, "had all the outward signs of a concentric operation directed from several sides to an adversary squeezed in a gripped area."

In strategic terms, the supreme Turkish command was the desire to fully use the favorable geographical conditions and engineering training theater of operations. The armies were set decisive targets: to exhaust the enemy with active defense, to bleed the enemy, to stretch its communications, to draw into the "bag" and defeat the Russian troops with powerful flank counterattacks, to throw them beyond the Danube and beyond. The problem was that the then Turkish army simply could not fulfill such a good plan, for its fulfillment much better trained command and staffs of formations, tactical, combat and enterprising middle-level commanders, well-trained soldiers were needed (that is, the Prussian-German army was needed ). Then this plan had every chance of success. However, even such a plan (taking into account the mistakes of the Russian command) broke the decisive breakthrough of the Russian army for the Balkans with access to Constantinople and a quick victory. The war became protracted, exhausting, to which the Russian army and Russia were not ready.

At the Caucasian theater, the Turkish command at first planned to launch active offensive actions. The Ottomans hoped that they would be supported by local feudal lords who were dissatisfied with the policies of the Russian “invaders”, that the uprising would raise the Muslim population, perhaps the highlanders who had only recently joined the Russian Empire. Highlanders from among those who fled to Turkey from Russia during the Caucasian War were going to use as sabotage detachments.

The Turkish command hoped that by invading the Russian lands, it would be possible to divert part of the forces of the Russian army from the Balkan front. However, it soon became clear that there were almost no well-trained troops to conduct a full-fledged offensive in the Caucasian theater. Turkish troops in the Caucasus - about 90 thousand people, had neither numerical nor qualitative superiority over the Russian Caucasian army to count on the success of a large-scale offensive operation. Therefore, Mukhtar Pasha, who assumed command of the Anatolian army, decided to confine himself to defense. “The plan said,” he noted, “that everywhere the Turkish military forces must hold on to a defensive war.” At the same time, the idea of ​​initiating an uprising among Caucasian Muslim ethnic groups was not abandoned, but it was planned to carry out no longer by invading the Caucasus across the land border with Russia, but as a result of the landing of troops on the Russian Black Sea coast.

Thus, the Turkish command planned to wage a defensive war on the Caucasian front, while simultaneously trying to provoke an uprising in the Russian rear. The Turks could successfully defend themselves, since in the Caucasus direction there were strong large fortresses that were modernized for war. The Turkish commander-in-chief assessed the results of these works on the modernization of the fortresses: “After 12, the fortifications were almost over. Erzurumskie a few behind them. Ardaganskie also made great progress. ” Arsenals of fortresses were replenished weapons and ammunition, food was collected, which allowed to withstand a long siege. The main supporting base of the Turkish army and the most important hub of the roads, where all the ways from Russia into the interior of Turkey converged, was Erzerum. From the Russian side, the approaches to the Erzurum valley were covered with the fortresses of Ardagan and Bayazet and Kars and partly Batum.

In the Black Sea, the Turkish fleet had complete superiority. Therefore, the Ottomans planned active actions with the aim of gaining complete dominance in the Black Sea, which made it possible to maintain ground forces from the coastal flank in the Caucasus and the Balkans. Before fleet The following tasks were set: blockade of Russian ports and naval bases; support for troops on the Danube - here the Turkish Danube flotilla was to play a major role; support for the flanks of the ground forces in the Balkan and Caucasian theater; landing; transportation of military goods in the interests of the army; protection of maritime communications.

However, as it turned out during the war, the Turkish command overestimated the capabilities of its fleet and underestimated the strengths of the Russian fleet. Turkish naval officers and sailors had inadequate training and lost the fight at sea to Russian auxiliary cruisers and mine boats.

Thus, in general, the Turkish strategic plan, although it had some correct grounds (in particular, the natural defenses, strong fortresses), was not fully and specifically developed. In addition, Turkey did not have a first-class army that could implement the "Balkan Cannes" to lure and destroy the main forces of the Russian troops.

Mobilization of the Turkish army

By the beginning of the war, the entire Turkish army, according to Turkish sources, consisted of 494 thousand regular troops. Approximately 190 thousand people were located in the areas of the main fortresses: Vidin, Ruschuka, Silistra, Dobrudja, Shumla, Tirnov, Gabrovo, Varna, Niš, Sofia and Adrianople; 100-thousand the army was stationed in Bosnia, Herzegovina and Albania; 10 thousand people - in Crete; 15 thousand people - in Ioannina and Larissa; 20 thousand people - in Constantinople; 140-156 thousand people - in Asia Minor and Africa. Thus, 330-340 thousand Turks were located in European Turkey, of which more than 200 thousand people were in the Danube theater. Of the troops on the Danube, the bulk of the Turkish troops were in the quadrangle of the fortresses, while the other troops were scattered around small units and subunits on the front from Kyustendzhi to Niš. The left-flank group of troops, which, according to planned plans, was supposed to focus on the sector from Sistovo to Rakhovo and inflict a counterstrike on the Russian Danube army, was not actually formed. At the same time, the Turkish command could seriously strengthen the troops at the Danube Theater and the Balkan line by transferring troops from other parts of European Turkey, from Asia Minor and Egypt.

In the Caucasian theater of military operations, at the head of the army, Mushir (Marshal) Mukhtar Pasha became the head of the army. In total, 65-75 thousand Turkish troops were located in the first line. In the composition of all these troops, the priority units were few, the reserve troops, militias and irregular units prevailed, especially in the Batumi direction. Turkish troops were divided into several groups: 1) Kars detachment under the command of Mukhtar Pasha, it was the most powerful group - divisions of Hussein Hami Pasha, Ahmet Mukhlis Pasha and Ali Pasha (47 infantry battalions, 11 of hundreds of cavalry and XNUM) field batteries); 6) Ardagan squad of Hussein Sabri Pasha (2 battalions and 10 batteries); 2) Alashkert detachment Tatla-Ogly Mehmet Pasha (3 battalions, 12 hundreds, 4 batteries); 2) Faenik Pasha Vansko-Bayazet detachment (4 battalion, 4 hundreds, 2 1 / 1 batteries); 2) Batumi Dervish Pasha Detachment; 5) reserve in the area of ​​Erzerum (near 6 battalions). 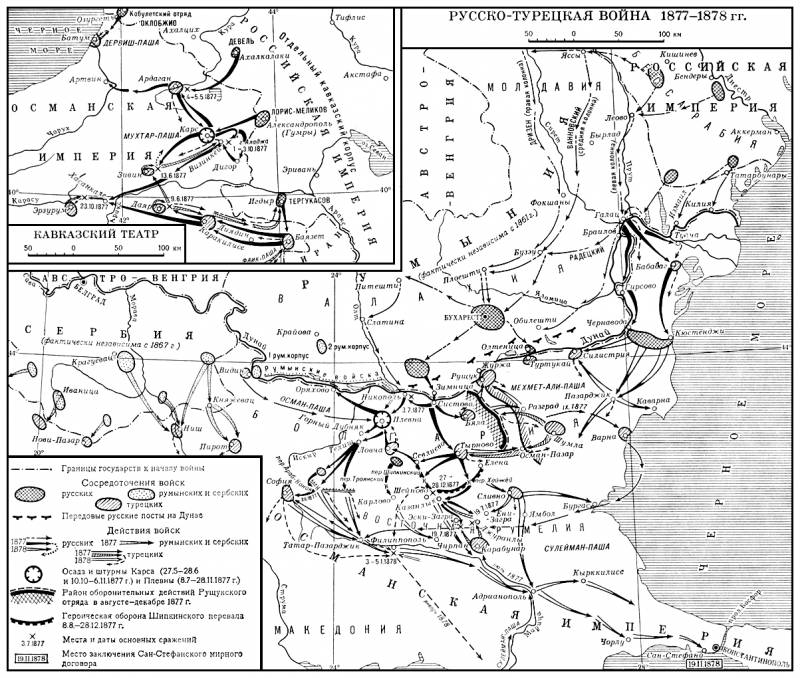