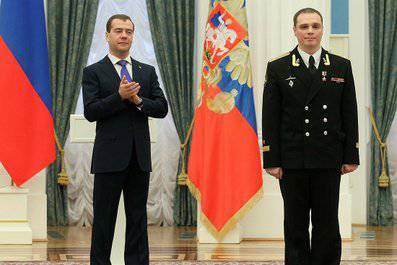 Northern Submarine Commander fleet I rank captain Alexei Dmitrov was awarded the title of Hero of the Russian Federation by decree of the President of Russia.

Captain I rank Dmitrov is one of those few who already at thirty-two years became the commander of a nuclear submarine. Since 2005, Alexey Vyacheslavovich serves as commander of the submarine. He participated in 8 long hikes, including in iceberg-hazardous areas of the oceans. Submarines under the command of Captain Dmitrov in the 2006 and 2009 became the best in the Navy. In 2009, the crew under the command of Dmitrov won the 3 prize of the commander-in-chief of the Navy in the types of competitions between the submarines of the Russian Navy.

Captain I rank A. Dmitrov was awarded the Order "For Military Merit", the medal "For Services to the Fatherland" II degree, and other medals.