They wanted for IS - it turned out as always: Washington fired on peaceful Syrians

29 May 2017
17
The air force of an international coalition led by the United States launched an airstrike on the Syrian city of Meyadin in the province of Dair Alzour. As a result of the shelling, at least 35 civilians were killed. 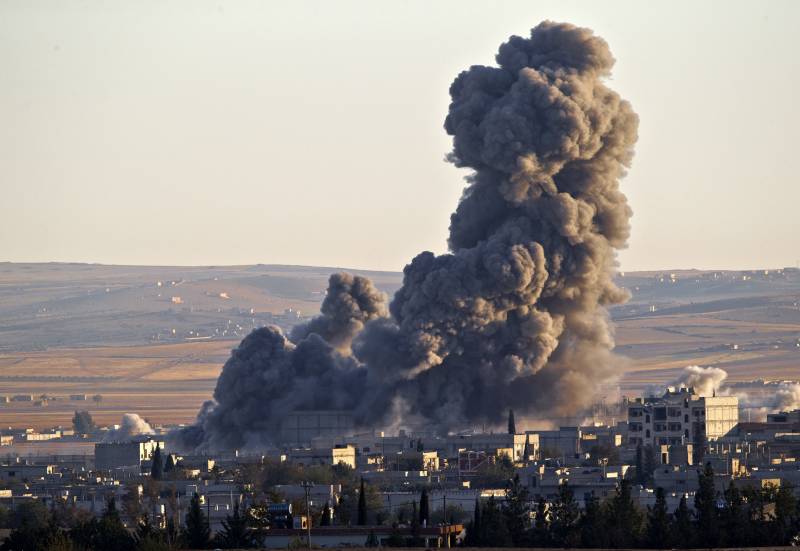 Having almost 15 years of experience in the war in the Middle East, American eaglets cannot (or do not want to - editor's note) master the technique of accurate shooting. According to information from open sources, over the past three weeks, the tragedy in the village of Meyadin has become at least the fifth “blunder” of the coalition air forces. Two weeks earlier, unsuccessful bombing took place in the village of Shanin - four civilians were killed - and Ar-Rumail, where 5 families were killed. In addition, the cities of Al-Kuriya and Al-Sakhalia - 5 and 11 victims were subjected to unsuccessful shelling.

Shooting the United States and its allies on the principle of “anyhow where, if only to fly in that direction” is also regularly conducted on the territory of Iraq, where, as it turns out, only in one incident, the number of “killed by mistake” can reach three digits. This week, the Pentagon pleaded guilty to the death of 105 civilians who were victims of the bombing of the US Air Force on March 17. 36 civilians who were in close proximity to the impact site are missing. The reason for such statistics was getting one of the ammunition into the building in which the IG terrorists (banned in Russia) stored explosives.

It must be emphasized that the location of military facilities in densely populated neighborhoods is a common practice for militants that military specialists should take into account when preparing special operations. It turns out that planning is not the strongest side of our "partners", if we consider that in the building where more than a hundred citizens were killed, in addition to explosives, was the entire 2 terrorist? Perhaps, however, the version seems more plausible that the series of mistakes and coincidences of overseas colleagues is not accidental, returning to the issue of the policy of double standards, in which Washington has established itself as a true "master of the game."

Obviously, in order to deliver accurate strikes at terrorist locations, serious intelligence work and careful verification of the data is necessary. According to sources familiar with the situation, in most areas where air strikes are inflicted, coalition forces do not have such capabilities.

It seems the United States guesses that to achieve success in Iraq’s Mosul with minimal losses of innocent people, in addition to ultra-precise technology, it is necessary to use the human factor in terms of intelligence and negotiations with all parties to the conflict, as evidenced by the successful operation to liberate Aleppo. Nevertheless, the international coalition led by Washington on this issue has a different opinion and the scorched-earth tactic seems preferable. However, if you set a goal for yourself to continue the escalation of a military conflict, the American method is more than effective.