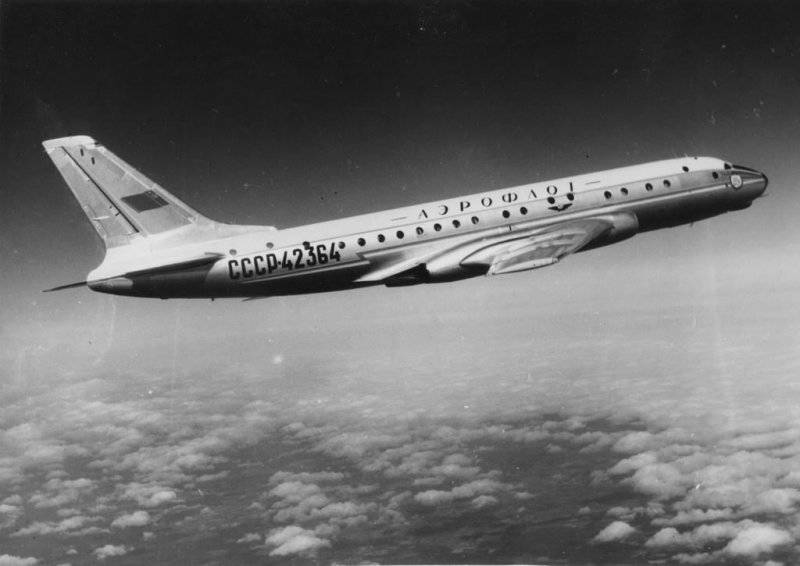 More than half a century ago, the first flight tests of the first domestic passenger passenger aircraft Tu-104 began. Its creation was an important stage in the development of world aviation.

The successful use of jet aircraft in the air force helped solve the problem of introducing the same machines in civil aviation. The first aircraft of this type appeared in the 1949 year in the UK. After several years of testing, the aircraft entered mass production. However, a large number of accidents in the 50-ies forced to remove the machine from operation. It took the designers four years to fix all the problems, after which the newly re-created aircraft returned to the airline.

While the English Comet was in the process of being finalized, the Soviet Union had a great chance to become the first state in the world to have a jet passenger plane.

Its development began in the 1954 year. The basis of the passenger aircraft was the Tu-16 bomber. This solution was designed to save time on the design development. The first Tu-104 aircraft flew in early November 1955. Thus, the development took quite a bit of time. During this flight, it was not without problems: during the flight, the plane unexpectedly threw up, after which the control of the machine was lost for some time. The pilots called this state a “pickup”. The cause of this phenomenon could not be determined. Despite this, the operation of the aircraft was continued, and the tests did not stop.

The Tu-104 aircraft was so much liked by N. Khrushchev that he even decided to fly it to the UK in the 1956 year. Since the problems with the plane could not be resolved, he was persuaded to abandon such a flight. But it was necessary to demonstrate to the world the successes of the Soviet aircraft industry. Therefore, by order of Khrushchev, the Tu-104 was driven into the British capital.

Appearing in London, the first Soviet jet produced an impression of a bombshell. The next day, another similar aircraft arrived there. The British said that the Russians simply repainted the numbers on their only plane. The chief designer A.Tupolev didn’t like such statements, so he ordered to bring three Tu-104 aircraft to London at the same time. This was truly the triumph of the Soviet Union, because not a single state in the world had passenger jet airliners.

But, as further developments showed, the problems with the “pickup” were not resolved. In August, the 1958 of the year, the Tu-104 plane, having lost control, crashed, resulting in the death of the 64 man. The designer Tupolev in every possible way denied that there were any problems whatsoever, and the crash was the fault of the crew. There is a version that the plane simply did not have enough fuel. But after a while and the second Tu-104 crashed, going into a tailspin and crashing into the ground. And after another two months, the exact same situation was under Kanash. On that fateful day, the plane performed a Beijing-Moscow flight. Flight altitude was 12 kilometers. Suddenly, the plane abruptly threw up, and with such force that such a huge colossus flew up two kilometers!

The crew commander Harold Kuznetsov and the co-pilot Anton Artemyev tried to level the plane, all the way taking the helm. But it did not help. Then the plane abruptly went down, not listening to the controls. Thus, the plane entered a steep unmanaged peak. At supersonic speeds, almost vertically, the plane flew toward the ground.

According to the results of the work of the state commission, the accident lasted no more than two minutes. The commander immediately realized that death was inevitable, so from the 13-kilometer altitude he began transmitting information about what was happening to the ground. The link worked almost until the moment of collision with the ground. The last words of the commander were: "Goodbye. We die.

The information transferred to Kuznetsov was of great value, since all previous incidents remained unsolved. None of the investigations carried out by specialists from the Main Directorate of the Civil Air Fleet, the Air Force, the State Research Institute, or the Tupolev Design Bureau itself could shed light on what actually happened. Many assumptions were made: technical malfunction, design defects, bad weather conditions, crew errors. All the bumps, of course, fell on the heads of the pilots, as no one doubted the technical characteristics of the aircraft. But the information transferred to Kuznetsov dotted the "І". From the information received, the commission concluded that the airliner got into a huge upward air flow. None of the designers could even suggest that this is possible at an altitude of more than 9 kilometers, since simple piston machines could rise to a much smaller height. Therefore, the phenomenon of turbulence, was considered a trifle. Until the tragedy happened ...

Kuznetsov’s crew hit the very center of the vertical airflow. Later, during the flight reproduction, the designers were able to determine its parameters: the width of the air flow was about 2 kilometers, length - about 13, thickness - about 6 kilometers. At the same time its speed was close to 300 kilometers per hour.

It was necessary to urgently find a way to deal with such a dangerous phenomenon of nature. As a result, the maximum flight altitude was lowered, the structure itself was modernized, new techniques for centering machines were developed, but still they did not completely solve the problem. High accidents remained at the same level, but what was the cause — either errors in the design, or unavailability of the pilots — was difficult to determine.

It is not surprising that the aircraft gained notoriety. In 1960, the Tu-104 liner was discontinued, and its IL-18 turboprop liners took its place for a while. And since a long strip was needed to disperse the Tu-104, it was not often used on domestic flights.

There was a need to create new passenger aircraft. Tupolev decided not to retreat from the intended path. As a result, the first modification of the Tu-104 was created - the Tu-124, which was also distinguished by a high accident rate. Therefore, another option was created - Tu-134. This aircraft was more successful, so since the start of operation in the 1967 year, it still flies on domestic airlines. And only in 1972, the first Tu-154 jet airliner appeared, which was not converted from a military vehicle, but was originally designed as a passenger aircraft. This is one of their favorite aircraft of domestic experienced pilots.

The last Tu-104 airliners disappeared from regular flights only in the 1979 year, but for some time were used for training sea fighter pilots, as a staff plane, a flying laboratory. Finally, Tu-104 flights stopped only after one of the planes crashed near Leningrad, as a result of which the 52 man was killed.

Such a bitter experience forced domestic designers to think of new aerodynamic forms that could resist air flow.