Mikhail Berdennikov: Amphibian - what we will do very actively 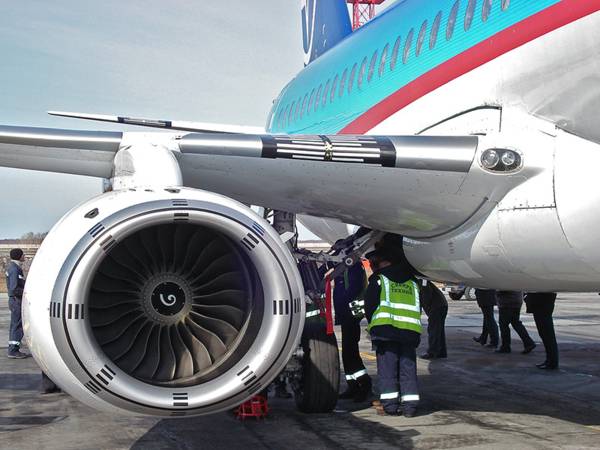 The use of the SaM146 Russian-French turbojet engine has so far been limited to regional Sukhoi Superjet 100 aircraft, but it seems that the situation will change soon. The director of the SaM146 program of the Rybinsk NPO Saturn, Mikhail Berdennikov, spoke about the new customer of the engines and the impact on the project of European sanctions in an interview with Interfax.

“Sukhoi civil aircraft” declare that they will produce “more than 2017” SSJ – 30 in 100 year. So, your production plan for this year is “more than 60” engines? And how much SaM146 has been produced since the launch of the program?

Since the beginning of the program, we, that is, PowerJet (a joint venture of NPO Saturn and the French company Safran Aircraft Engines - IF) have produced a 271 serial engine. As for the production plan, it consists of several components. The first is the volume that we have to supply the GSS, that is, the engines installed “under the wing” in Komsomolsk or, in some cases, in Zhukovsky.

The second component is the filling of the PowerJet's leasing pool, which SaM146 operating airlines can use if a particular engine requires repair or maintenance. Plus, we need to produce at the end of the current year a number of engines in order to provide a reserve for January of the next year. In addition, some airlines, for example, the Mexican Interjet, acquire spare engines, which become their property.

Thus, on 72 motor we have a firm order from GSS, and in addition we will manufacture 6 engines as leasing and spare. As for the long-term plans, we are confident that the production of the aircraft produced by the GSS is stable and will be implemented. Based on this, we plan our activities.

For all history How many programs has the Russian side invested in it and how much is the French partner?

The SaM146 program is based on the risk principles of a divided partnership. The shares and contributions of the parties to the development, production and other aspects of the program are determined by expert in the early stages of the project. NPO Saturn is responsible for the “cold” part of the engine (fan, low pressure compressor, low pressure turbine), the French partners for the “hot” (gas generator), units and drive, as well as the overall integration with aircraft systems. But each company has its own business plan.

Therefore, we have no information about the investments of our partner. If we talk about us - when we entered this project, we had to invest not only in the creation of the product itself, but also in production capacity, personnel training, and all other aspects. Including our own funds, credit, as well as state support - this is about 25 billion rubles.

Has the devaluation of the ruble affected the relationship with the French partner?

No effect. We have the price of the power plant nominated in dollars, many purchases from our foreign partners are in dollars.

Are there any sanction risks in the project - if sanctions, for example, are tightened, and the French are forced to leave, what to do then?

Sanctions do not affect the SaM146 program. Our cooperation is developing steadily. I believe that this will continue. There is no reason to assume otherwise.

Are we able to continue the project alone?

I would not even put the question like that. SaM146 is the result of interaction between the Russian and French sides. So it will be in the future.

It has been reported that, until now, the SaM146 program has been causing losses. How much? When is it planned to achieve payback and at the expense of what?

We continue the investment phase of the program, namely the expansion of our capabilities in terms of repair production. In fact, we are investing in the saturation of the market with aircraft with our engines. Accordingly, we expect that when the operation will be around 800 engines (taking into account the spare), the operational break-even point will be reached - and this depends on the success of sales of GSS. But for the time being we are moving along the scenario that was adopted when we signed an agreement with a French partner in 2005, implying that the break-even point will be reached approximately in 2023.

Are you planning to expand the network of distribution centers for spare parts?

Today there are two such centers: in Lytkarino near Moscow and in France, in Vilyaroshe. So far, such localization of warehouses allows delivering parts within almost a day to almost anywhere in the world. As the number of SSJ – 100 operators increases in certain regions, new centers may emerge, but so far there is no need for this.

How often do faults occur in SaM146?

Any new product has flaws that cannot be predicted at the design stage. If these defects are identified during commercial operation, they are continuously monitored, and as information accumulates and additional calculations are performed, if required, changes are made either to the design documentation or to the operational documentation.

In general, we and the French partner believe that the SaM146 operating experience is very successful. Since commissioning in April 2011, the Sukhoi Superjet 100 with SaM146 engines has been showing high performance, including in difficult climatic conditions: in Yakutia, Mexico. The indicator of the reliability of departure on the schedule of the engine is 99,9%.

Initially, due to the fact that almost no one of the Russian suppliers was certified according to international standards, materials for the engine were supplied to VSMPO-Avisma and Western manufacturers. And now what picture?

In addition to VSMPO – Avisma, we initially had and still have another Russian supplier certified by European standards - a supplier of composite parts. And this company is interested in expanding the range of parts that it could supply for SaM146.

But on the whole, the problem of suppliers rests on one simple thing: the supply volumes for SaM146 in the scale of the Russian economy are insufficient. And if a major supplier of materials is interested in obtaining an international certificate, this assumes that the volume of products that he will manufacture will be significant for him. VSMPO – Avisma is supplied by titanium for Boeing, it’s interesting, important and profitable for them. If the products are in demand without international certification, and the cost of such certification — money and time (about five years) —will not be justified in any time by supplying new certified products, then interest in obtaining an international certificate disappears. The way out is to increase production on the world market.

When and how exactly will the engine be certified for China?

No final decision has been made. At the end of last year, we applied to EASA (European Aviation Safety Agency) to certify the engine for the Chinese market. Now EASA and CAAC (Civil Administration aviation China) must decide which mechanism to use. What we depended on, we did, and we intend to actively push this process. But, ultimately, the aviation authorities must reach an agreement among themselves.

Does PowerJet have plans for large-scale engine improvements for any projects?

One of the projects announced by GSS was an extended version of SSJ-100 on 120 places ...

According to our information, for the SV – version it is enough to have an existing engine modification - 1S18.

At the design stage of the S-M146, its use in the future on other types of aircraft was discussed. For example, the Bombardier CRJ version was considered, the Be-200 amphibian. When will all this be possible?

Using an engine for various planes is a common practice. Not so long ago, PowerJet received an official proposal from the United Aircraft Building Corporation to create a joint working group to work out the technical capabilities of the Be-200 remotorization with the SaM-146 engine. This work should begin soon.

The reasons for which the aircraft Be-200 could not be equipped with our engine, we do not see. But, as with any complex product, we need to work together so that the engine and the aircraft “work together”.

Is this the only substantive negotiations today?

There are several ideas, but the amphibian is what we are going to do very actively now.