17 May 2017
38
The British edition of Daily Star rather unexpectedly reacted to testing the new Russian parachute system.
The trials were so impressed with the tabloid that he called them "terrifying military exercises" and accompanied the published photos with relevant comments. According to the author of the material, "Russian Tanks literally fell from the sky. "At the same time, the publication regarded the testing as a" rehearsal of the battle with the NATO army "and even as" preparation for the third world war, " "Russian newspaper".

Daily Star reports that during the tests, the Il-76 military transport aircraft was parachuted by BMD-4M, which for some reason was called by British journalist tanks. 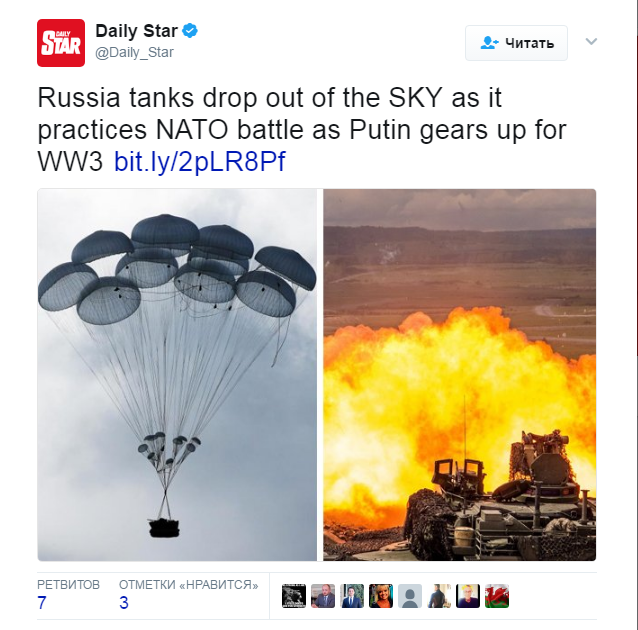 Meanwhile, the Ministry of Defense of the Russian Federation explained that during state tests of modern parachute systems in the Ryazan region, several BMD-4М were parachuted for the first time with a maximum load from a height of about 800 meters.

The multi-dome system, which is part of the newest means of landing, with a total area of ​​about four thousand square meters ensured a safe descent and landing of combat vehicles
- stressed in the department.

It also became known that the preparation of BMD-4М for the landing and their loading into the IL-76 aircraft was carried out jointly with the testers of the Russian Aerospace Force. And after the BMD-4М was landed and landed, the experts checked the driving performance of the vehicles and the operability of the weapon system.

In the future, it is planned to conduct even more 20-like BMD-4М landings.