15 May 2017
38
Advisor to the Minister of Internal Affairs of Ukraine Ilya Kiva on the air of 112 Ukraine showed that the “separatists” reached Kiev. Kiva pointed to the camera cash checks of one of the outlets of the Ukrainian capital, which were printed not quite censor words about the president Poroshenko. In addition to the definition of Petro Poroshenko, the so-called non-fiscal cash voucher contains the entry “Donbass taxis!” This drove the so-called Ukrainian patriots into a rage. 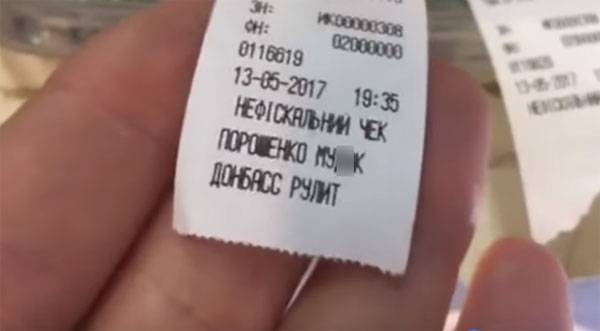 About what kind of outlet issued such cash checks, not reported. However, the material on the Ukrainian TV, it was stated that the cash register "could be cracked for the purpose of provocation."

The check was reportedly received by Dmitry Korchinsky, who is in the circle of Ukrainian radicals.

It should be noted here that a few days ago the aforementioned Kiva announced the creation of special groups of patrols from among the "veterans of the ATO." These patrols should assist the national police to patrol the streets and identify sympathizers of the “aggressor” and “separatists”. It can be assumed that it was such a national-radical patrol who discovered an encroachment on Ukrainian self-identity and independence.

If at first patrols are funded from volunteer sources, then Kiva plans to transfer them to receive funds from local budgets. If we consider that in Dneprodzerzhinsk, the radicals shot the taxi driver's leg for speaking Russian and refused to answer “Glory to Ukraine”, then Kiva's patrols are unlikely to do anything else.