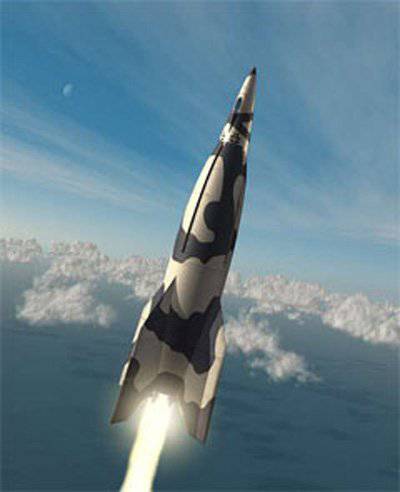 At the end of 1944, a plan of missile attack on the United States began to emerge in the inflamed mind of the leaders of Nazi Germany. Hitler's sick imagination, by then already suffering an unambiguous defeat on all fronts, paints pictures of the ruins of American cities. Hitler still continues to sincerely believe in the imminent turning point in the course of the war, which will become possible thanks to the use of the latest weapons of tremendous destructive force delivered by means, the interception of which with the help of modern air defense forces and aviationwould be impossible. Thus, Hitler and his inner circle seriously dreamed of creating intercontinental ballistic missiles capable of carrying a nuclear warhead. Hitler was optimistic about the practice of rocket attacks on Britain, which did not suffer significant material losses from the attacks of the German Fau-1 and Fau-2, which nonetheless kept the British in constant psychological tension. Although the missile strikes sinned with inaccuracy and did not have tremendous destructive power, they were still an extremely unpleasant phenomenon, primarily because of their suddenness and unpredictability, which brought ordinary Britons a lot of grief and tears.


Immediately make a reservation that due to the fact that no atomic weapons Germany did not appear before the end of the war (that the Nazis were very far from creating a full-fledged atomic bomb, says most serious historians), intercontinental missiles, if they could be created, would have to be filled with ordinary explosives used by the Nazis during the attacks on the British Isles. Therefore, Hitler would not have achieved a decisive turning point in the war under any circumstances. The Germans would certainly not have succeeded in significantly disrupting the American infrastructure with the help of possible missile strikes, but of course it would have had a political significance. A missile that reached the US would become a symbol of the continuation of the struggle and the ability of Nazi Germany to retaliate.

Therefore, the Nazis, as they say, grabbed a straw, struggling to develop their technological superiority over the Western allies. For the implementation of the ambitious plan, involving the delivery of missile attacks on the United States, they had the winged V-1 and the ballistic V-2, which hit only 300 kilometers, was clearly not enough. The nazi military required non-standard breakthrough solutions, both in terms of technology and in terms of tactics for conducting rocket attacks.

At first, the Nazi designers proposed modifying the serial V-2 in such a way as to launch them from the newest submarines of the XXI series, being in close proximity to the shores of the United States. However, this idea, which seemed to be fully embodied, did not find support for the Fuhrer and his naval commanders. In addition, there were not enough submarines, and it would not have been possible to manage the rocket modernization alone - we would have to redo the submarines, which in the conditions of the end of 1944 was a completely impossible task for Germany.

And then the design genius von Braun turns to old sketches, dated 1940 year, describing the process of building a two-stage intercontinental rocket, the first stage of which, in fact, would be an enlarged modification of the same "V-2". The second stage was supposed to contain a warhead and, most importantly, be equipped with swept wings, which, according to the designers, should have made the intercontinental rocket, at times increasing its flight range.

According to the assumption of one of the employees of von Braun Dr. Tiel, a multiple increase in the power of the rocket can be achieved by combining six standard motors from the V-2 into a single carrier unit. As is known, this principle was subsequently successfully applied on Soviet and American missiles. At the first stage, the Nazis planned to use a mixture of oil and benzene as fuel, after which they planned to switch to liquid hydrogen. These ideas of von Braun and his team were also embodied in launch vehicles of the near future, in the American Atlas.

It must be said that the pace of work and the inspiration with which the Peenemünde designers worked, cannot but arouse respect. The result of their efforts was a sample of the upgraded "V-2" with increased engine power and range 800 kilometers. However, the most important nuance was that the rocket was represented by the designers as nothing more than a manned projectile with a cockpit for the pilot. At the turn of 1944-1945, two test rocket launches were made. According to the results of the second test, the rocket managed to reach an altitude of 90 kilometers. The successes of the Nazi rocket engineers in terms of the implementation of Project America ended well here, but a significant part of them nevertheless found its embodiment, albeit in the form of drawings.

One of the drawings of von Braun describes a rocket equipped with wings, a landing gear and a drag parachute. In fact, we are presented with the image of the so-called stratospheric aggressor - an aircraft capable of speeding up to 2900 kilometers per hour and capable of climbing 95 kilometers, flying up to 800 kilometers.

Von Braun was definitely ahead of his time. In the 1944-1945 years, Germany fought a war in which the widespread use of rocket aircraft was neither real nor expedient. The epoch of future wars was then on the threshold, but it had not yet come. For its offensive, the fall of Germany was required, its complete defeat ...

However, by the beginning of the victorious spring of 1945, von Braun had finalized the design of a two-stage rocket designed to carry out ambitious plans for an attack on America. As expected, the first stage was an enlarged modification of the V-2 rocket, which had not six in its womb, but only one powerful engine. The second stage was a flying arrow-shaped wing. The weight of the structure at the start is 85 tons, the flight speed is 10600 km / h, the flight distance is 4800 km. Thus, if Von Braun’s rocket didn’t stay, although it was a genius, the blueprint would be New York and Washington, which could be in the area of ​​potential reach of the new German rocket.

However, the main point of the matter was not the speed and not even the flight range of the rocket, but the height of its trajectory. At the apogee of the rocket was supposed to reach an altitude of 338 km, and this is already a real space. Thus, the pilot of the product, which received the code name A-9, would automatically become not only a suicide bomber or a potential prisoner of war (in the event of evacuation from its side after direction to the target), but also the world's first cosmonaut! And this thought worried von Brown who dreamed about the conquest of outer space is much stronger than the possibility of launching rocket attacks on US territory.

The theme of the Nazi Germany missile program is the basis for numerous falsifications, mythologization stories The Third Reich and the appearance in some print media, media and the Internet frank mystical nonsense associated with the history of German rocket science. Obviously, only one thing: the successes of the Germans in the missile sphere were colossal, and this continues to generate absurd assumptions and multiply the legends associated with this topic. Rocketry has become the industry in which Germany has managed to outrun the whole world for many years. That is why the race for the technological secrets of the Nazis began even before the end of the war. All world powers have joined this race, but this, as they say, is a completely different story ...
Peenemünde. History FAU. Part of 1

Peenemünde. The history of the FAA. Part of 2

Ctrl Enter
Noticed oshЫbku Highlight text and press. Ctrl + Enter
We are
Who brought Hitler to powerFAU missiles - "weapon of retaliation"
18 comments
Information
Dear reader, to leave comments on the publication, you must to register.