In 1987, the new VSS "Vintorez" complex adopts the special forces units of the KGB of the USSR and reconnaissance and sabotage units of the Soviet Armed Forces and units of the Interior Ministry troops under the designation "special sniper rifle" (BCC) index 6П29.

News weapon, which is a group means of covert attack and defense, was intended to hit targets with sniper fire in conditions that require silent flameless firing at the enemy’s open manpower (destroying the enemy’s command personnel, its reconnaissance groups, observers and sentries) and disabling observation devices elements of military equipment and destruction of unarmored vehicles at ranges up to 400 m in the afternoon with a telescopic sight and 300 m at night with a night sight. 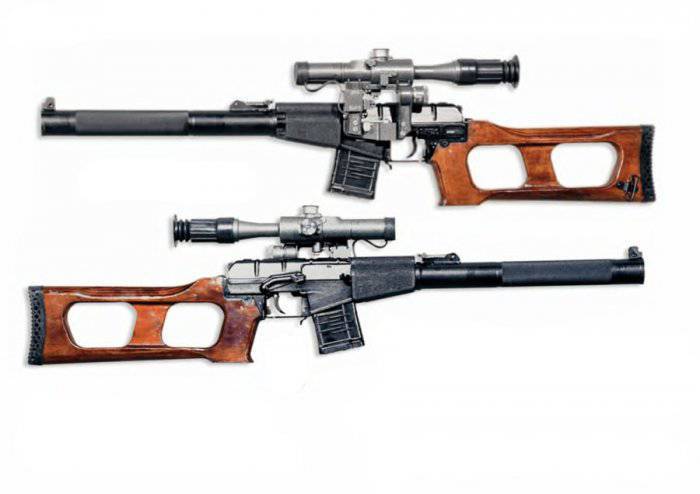 The design of the "screw cutter" is extremely simple. The peculiarity of its trigger mechanism, consisting of a drummer and two whispered - one for automatic, the other for a single fire.

The BCC rifle consists of a barrel with a receiver, a silencer with sights, a butt, a bolt carrier with a gas piston, a bolt, a return mechanism, a percussion mechanism, a trigger, a forearm, a gas tube, a cover of a receiver and a magazine.

The principle of automation and locking the barrel is the same as that of the Kalashnikov assault rifle.

BCC automatic equipment works on the principle of removal of powder gases from the barrel bore into the gas chamber located on top of the barrel under the plastic forearm, and the barrel bore is locked by turning the bolt with six lugs. The gas piston is rigidly connected to the bolt carrier. Inside the piston is hollow, and the reciprocating spring enters with its front end. USM - shock type, allows the conduct of both single and automatic fire.

The fuse box, displayed on the right side of the receiver, at the same time closes the groove for the reloading handle, protecting the box from ingress of dust and dirt. A translator of the type of fire is mounted inside the trigger guard, behind the trigger. When it is horizontally moved to the right, a single fire is fired, and when it is moved to the left - automatic shooting. The reloading handle is located on the right side of the receiver.

Sights consist of an open sector sight mounted on the body of the muffler and designed for a firing range of up to 400 m, and a front sight in a headset. The Vintorez can be equipped with a PSO-1 type sight, any regular night sight (NSSPUM, NSPU-3), as well as PO-3x34 type sights with a special adapter.

Food is carried out from a plastic box magazine with a double row arrangement of 10 or 20 cartridges. 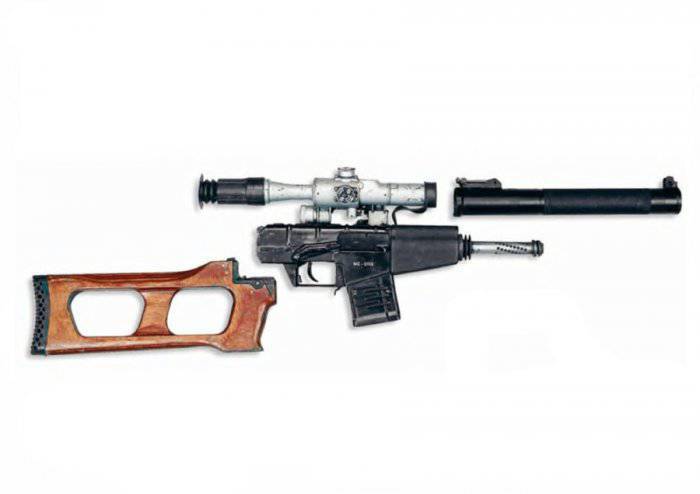 The butt is wooden, made like a SVD and equipped with a rubber nape.

The BCC “Vintorez” rifle is equipped with an integrated device for silent flameless firing (PBS), worn on the barrel. The action of PBS rifle is associated with an unusual device of the barrel itself. Its front part, closed by a silencer, has six rows of through holes made along the bottom of the rifling. When fired, as the bullet moves along the barrel bore, the powder gases escape through these openings into the muffler cylinder, and then they are successively scattered, expansion chambers, separator, broken into inter-extinguishing flows, cooled by a radiator net rolled up. The separator includes several partitions installed at different angles to the axis of the bore. Such a design of the silencer, along with the use of the SP-5 cartridge with optimal ballistic characteristics, made it possible to significantly reduce the level of unmasking signs (the sound and the flame of a shot). 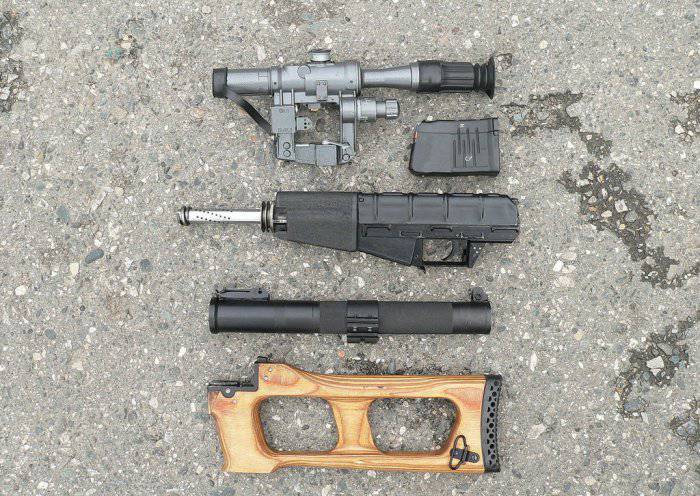 Shooting from the BCC "Vintorez" is made by special cartridges SP-5 and SP-6.
9-mm sniper cartridge SP-5 with a heavy bullet 16,2 g mass was created by the designers of TsNIITOCHMASH N. Zabelinym, L. Dvoryaninova and Yu. Frolov based on the sleeve of the intermediate cartridge mod. 1943 d. The subsonic initial speed of a bullet of this cartridge (270 - 280 m / s) provides the necessary sound reduction when using a silencer, and the increased mass of a bullet with a steel core provides sufficient penetration at distances up to 400 m. g, cartridge length - 5 mm. The relatively low speed of a heavy bullet is partly compensated for by its high energy and lateral load, which provides stability on the trajectory and sufficient disruptive action. On the basis of the joint venture-32,2 developed "armor-piercing" cartridge SP-56. The SP-5 has a bullet with a tungsten carbide core and a powder charge, enhanced compared to the SP-6 cartridge by 6%, which allows you to pierce the 5-mm steel plate at a distance of 20 meters. At a distance of 6 meters, the bullet of the SP-100 cartridge pierces a steel sheet with a thickness of 200 mm, and at a distance of 6 meters - with a thickness of 6 mm with an unconditional defeat of living targets behind these shelters. However, without the need to shoot only SP-500 cartridges, it is not recommended, as they cause increased wear of the barrel and the mechanism of the weapon. For firing at unarmored targets and for training is used cartridge SP-2. The ballistics of SP-6 and SP-5 cartridges vary in trajectory height, so the rifle must be targeted separately for each of these munitions.


The Vintorez BCC sniper rifle can be disassembled into three nodes (barrel with a silencer, a receiver with a trigger mechanism and a butt) and, together with the sight and magazines, is packed in a diplomat suitcase of 450xXNNXX370 mm size, moreover, the time required for weapons transfer from transport to combat, is no more than 140 minutes. 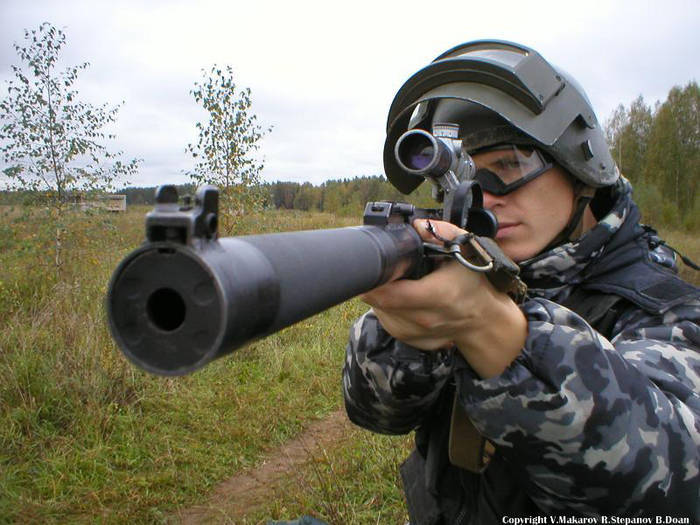 The life of the BCC rifle officially constitutes 1500 shots, but with timely care, cleaning and lubrication, this weapon can withstand up to 5000 shots without degrading the quality of the fight.

The BCC rifle is designed to perform accurate, neat and quiet operation on the principle of "bitten and hid." You should not get involved in frequent and long shooting from it. For the accuracy of the fight, the backlash between the working surfaces of the working parts is kept minimal, and after the shooting of three full magazines, the deposits of gunpowder deposits negatively affect the flawless operation of the mechanism. In continuous mode, the weapon can withstand a greater number of shots, but after cooling down, the Vintorez begins to give delays. This phenomenon especially makes itself felt in wet weather, because at high humidity the powder carbonate tends to "swell." Therefore, the rifle should be cleaned as often as possible.

The disadvantages of this rifle, from the experience of its combat use in the military, are the low strength of some parts, especially the receiver cover, and the click when switching the lever of the safety switch-translator of fire modes. The BCC rifle, as well as any other sniper weapon, requires particularly careful handling, which is not always possible to keep in combat conditions.

In combat use, Vintorez is an order of magnitude more effective than all known types of weapons of this class and purpose.

The Vintorez sniper rifle is produced at the Tula Arms Plant and is in service with the special forces of the Armed Forces and the Ministry of Internal Affairs of Russia, as well as the FSB and the Presidential Security Service. In addition, it is exported to the countries of the Middle East and South America, as well as to the USA.

The design of the rifle was recognized so successful that, based on it, the Valt Automatic (AS) and the Whirlwind compact CP-3 were created.

We are in Yandex Zen
Two rifles of two World Wars
"Trilinek" for a hunter in uniform
21 comment
Information
Dear reader, to leave comments on the publication, you must to register.