Photos taken inside the underground shelters of the PLA Air Force are usually very small and usually of low quality. Most likely, this is done intentionally. Naturally, the PLA Air Force will gain nothing from the distribution of such materials; moreover, it will indicate to the potential adversary the weaknesses of their design and use. 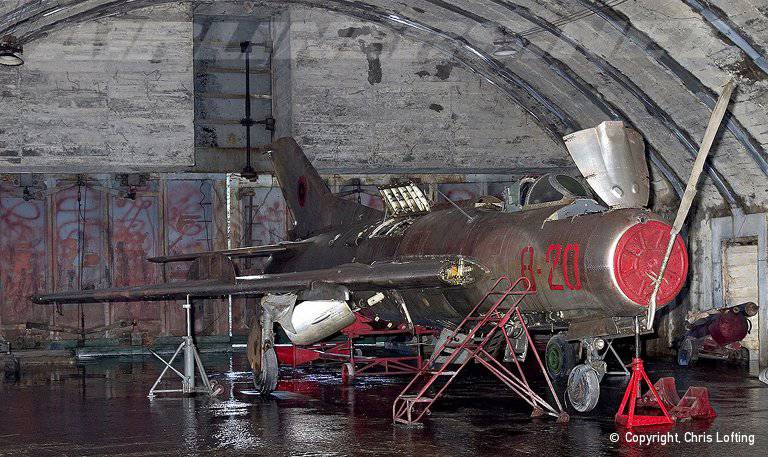 Inside view of the device external blast gate 14 meters in width in Gjadër Lezhë-Zadrima airbase in Albania. In the foreground, China-supplied J-6 Farmer Albanian Air Force, with the NR-23 cannons removed. 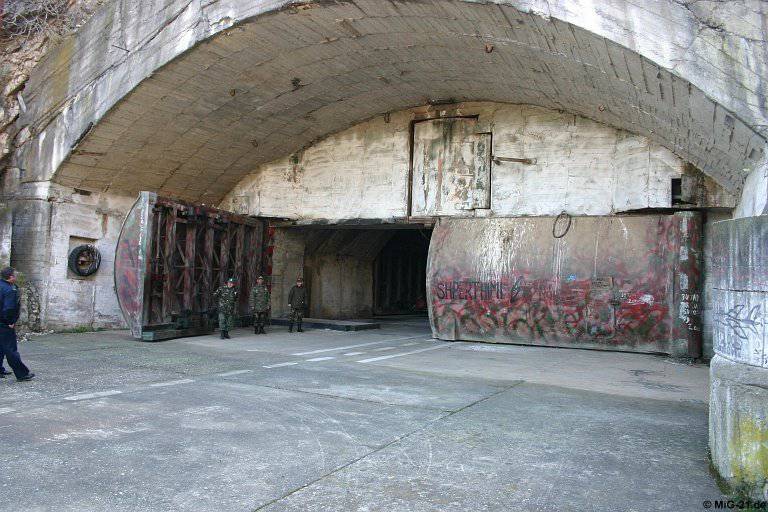 Appearance of open convex external blast doors of underground shelter 14 meters wide in Gjadër Lezhë-Zadrima airbase in Albania. The main bulging external blast gates are reinforced so as to transfer the overpressure of the explosion to the outer frame. Top outdoor blast gates closed. 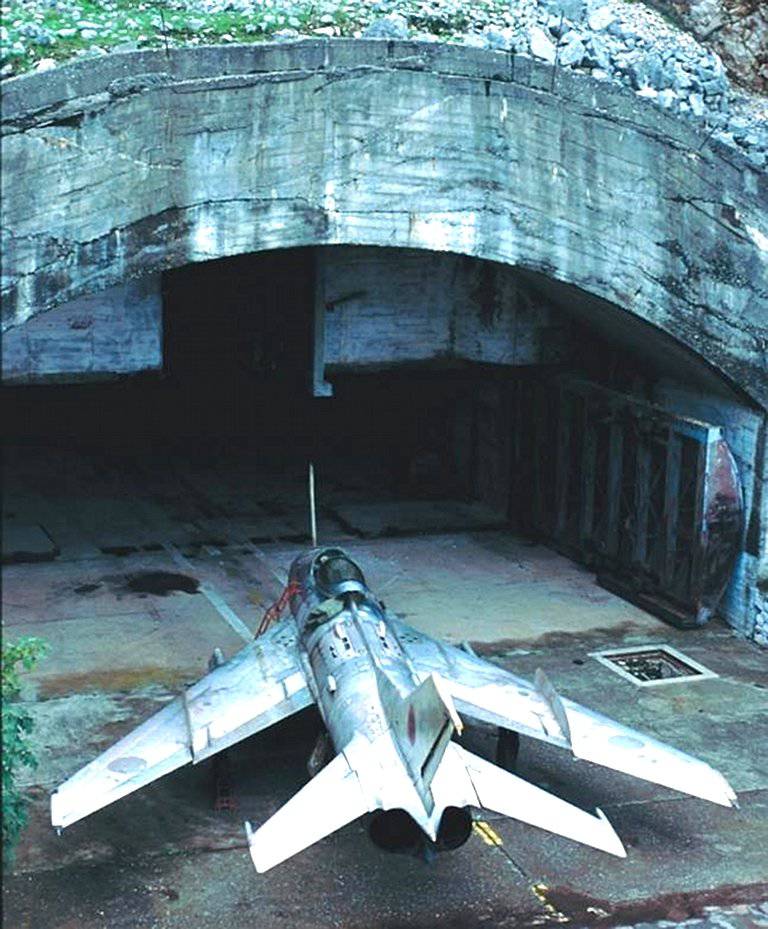 Another appearance of the open convex external explosion-proof gate underground shelter width 14 meters in Gjadër Lezhë-Zadrima airbase in Albania. The upper gate is hung on the right side of the gate. The concrete arch above the main entrance is a characteristic feature observed on Chinese airfields. In the foreground is China-supplied J-6 Farmer Albanian Air Force.

An alternative to Chinese airfields can serve as airfields in other countries, built according to the same rules, design and technical characteristics. A number of states have purchased a significant number of Chinese aircraft since the 1960s, but only the DPRK and the former Khoja regime in Albania also imported design data and built airfields with underground shelters according to PLA specifications. Albania received ongoing assistance from China until the end of the 1970s, before their relationship collapsed. 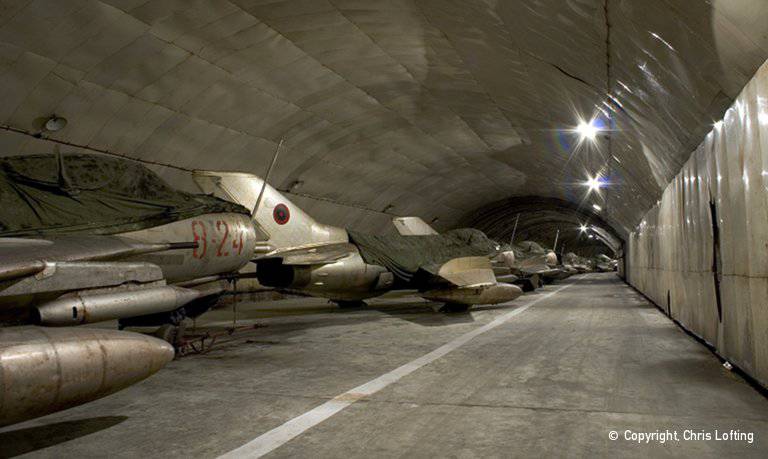 The main tunnel is 14 wide meters in Gjadër Lezhë-Zadrima airbase in Albania. In the foreground is China-supplied J-6 Farmer Albanian Air Force. The area to the right of the airplanes is vacated for vehicle traffic 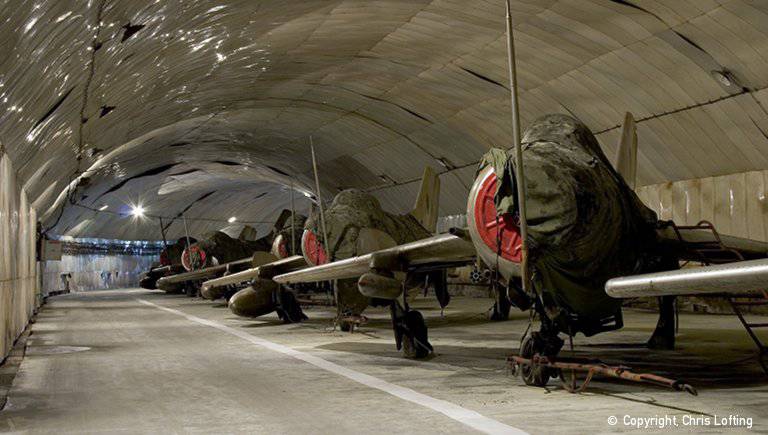 The main tunnel 14 meters wide at Gjadër airbase Lezhë-Zadrima in Albania. The design is a linear segment. Pay attention to the sheet facing. 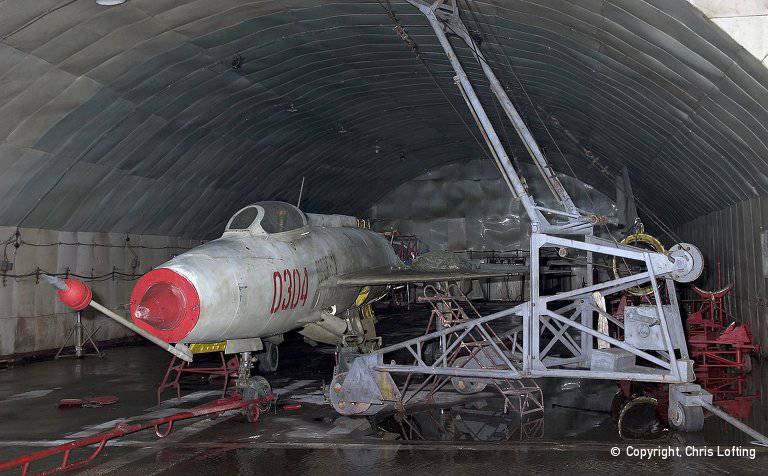 A short forking tunnel with a width of 14 meters at Gjadër Lezhë-Zadrima airbase in Albania. This example is used to illustrate aircraft maintenance, in the specific case of replacing a J-7 Fishbed engine. 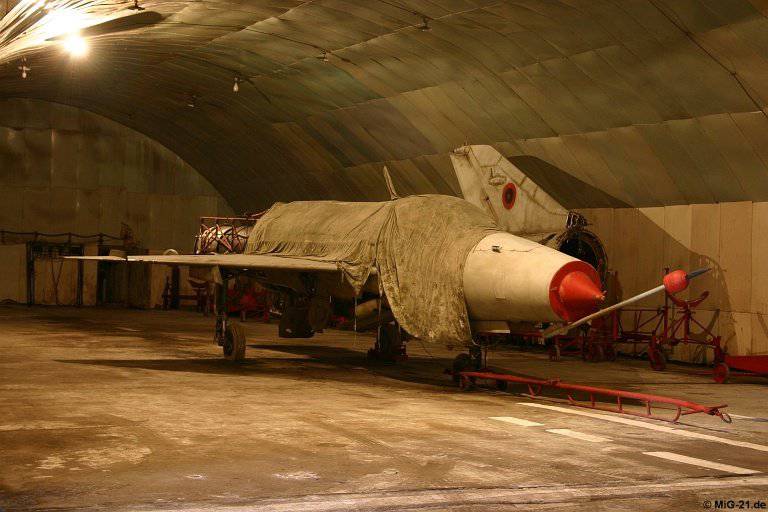 View from another point of the same tunnel of 14 underground shelter meters wide at Gjadër Lezhë-Zadrima airbase in Albania. 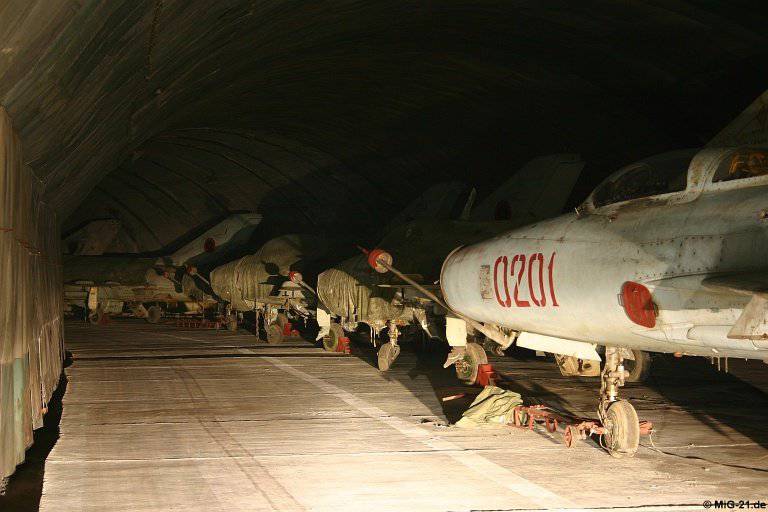 The main tunnel 14 meters wide in Gjadër Lezhë-Zadrima airbase in Albania, can also see the bend of the tunnel and the J-7 Fishbed planes of earlier models. 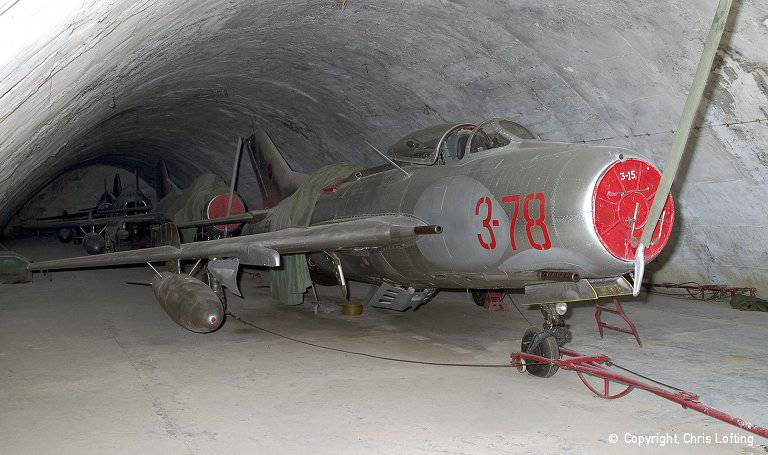 A short branch width 12 meters underground shelter at the airbase Tirana-Rinas in Albania. This tunnel is about 60 meters long, enough to accommodate four J-6 Farmers aircraft.

A number of important observations that can be made by analyzing the following images:
Location a: The main tunnel connecting the paired main entrances usually consists of straight sections, which are adjoined by easily curved sections. This is one of the possible basic layouts and is possibly the easiest to build;

Location b: Split blind tunnels about 60 meters in length, connected to the entrances to the main tunnel. In Albanian underground shelters, they are used to carry out deeper servicing of a single aircraft or to accommodate several airplanes, which are parked nose to tail. From the available images it can be concluded that the blind tunnels are connected to the main tunnel at a right angle;

Geometry: Two main sections of the tunnel are used. The first one has a simple cross section with a width of approximately 12 meters up to the floor of the tunnel. Such geometry is used in the underground shelter in Tirana-Rinas. The other has a cross section of approximately 14 meters wide, connected to vertical walls with a height of 3.4 meters with a total internal height of the arch of 6.3 meters. The latter geometry is used at air bases in Gjadër / Lezhë-Zadrima and Kuçovë;

Entrances and internal gates: The main entrance to the tunnel at the air bases in Gjadër / Lezhë-Zadrima and Kuçovë is through an inverted T-shaped main gate. Hinged exterior blast doors consist of several steel horizontally opening segments, complemented by smaller vertically opening steel gates for the passage of the vertical tail of the aircraft (see illustrations above). It is unclear whether such a structure is sufficiently tight when using WMD, although it is possible to maintain excess pressure inside the shelter in order to ensure hermitization with the internal gate closed. Internal gates are of course used to protect against adverse weather conditions;

External blast gate: The left and right main and upper swing blast-proof bulging gates of small radius of curvature are made of steel. In the available photographs, the gate has either a circular cross section or a chain curvature designed to transfer the load from the explosion pressure to the outer frame of the gate. Swing gates open outwards on hinges so that their inner side aligns with the left and right inner walls of the tunnel. The blast gate and the upper concrete wall structure are located about 7 meters from the tip of the hill to protect the open blast gate;

Internal blast gate: In the hangar at the air bases in Gjadër / Lezhë-Zadrima and Kuçovë, a second pair of swing-proof gates create a kind of gateway to enhance protection against shock waves.

Internal structure: The inner walls of the tunnels are made of reinforced concrete. It seems that the construction method involves the creation of a frame, a wooden flooring for forming the mold and pouring concrete in short stretches from 2-x to 3-meters. The twelve-meter tunnel in Tirana-Rinas has traces of adjacent concrete pouring segments. The four meter tunnels in Gjadër / Lezhë-Zadrima and Kuçovë have additional internal reinforcement of steel I-beams with an interval of 3 meters on the linear sections of the tunnel and only 1 meters on the turns of the tunnel. Most likely it was a reinforcement of the final design, and was also used to support the formwork during construction. Parts of the tunnel in Gjadër / Lezhë-Zadrima indicate that the mold is sagging during the pouring of concrete.

Drainage: Water seepage is clearly visible on the joints between the tunnel segments in sufficient quantity to observe the puddles in both tunnels in Gjadër / Lezhë-Zadrima and Kuçovë;

Surface finish: Parts of the tunnel wall in Gjadër / Lezhë-Zadrima are sheathed in white or light enameled sheet metal, the same is observed in the PLA tunnels. The walls of other tunnels in Gjadër / Lezhë-Zadrima and Kuçovë are either not plastered or smoothly plastered. A possible cause of cladding sheet metal may be improved lighting of tunnels, as well as improving the propagation of VHF radio waves in a tunnel or hiding a communications corridor;

Markup: Fourteen-meter tunnels are separated by a white marking line at a distance of 10 meters along one of the walls for storing aircraft, and the remaining 4 meters for automobile traffic along the entire length of the tunnel. PLA Air Force Tunnels seem to use a similar system.

The design of a fourteen-meter tunnel is very common in Chinese shelters and appears to be much more new than the design of a twelve-meter tunnel. The internal volume of the hangar is sufficient to accommodate the aircraft and provides considerable freedom of movement for tankers, loaders weapons and the movement of other providing vehicles.

Gjadër / Lezhë-Zadrima and Kuçovë shelter location diagrams were compiled by Roland Büchler after visiting sites and have photographic evidence. 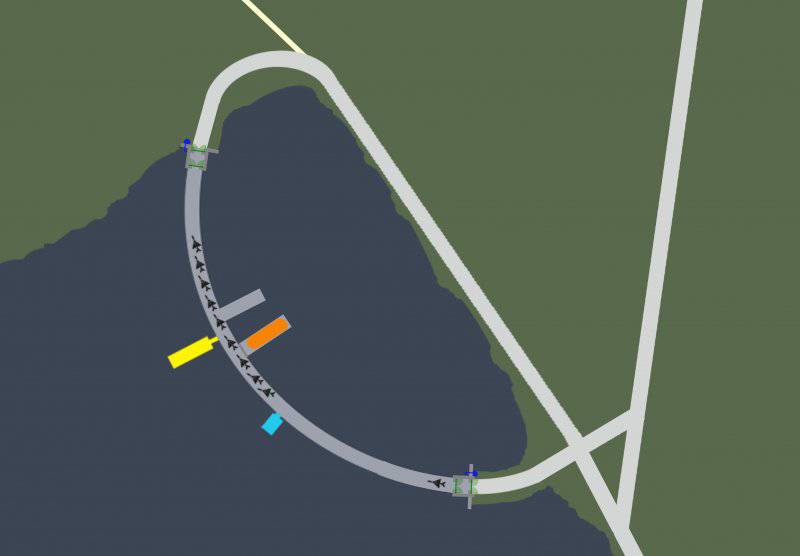 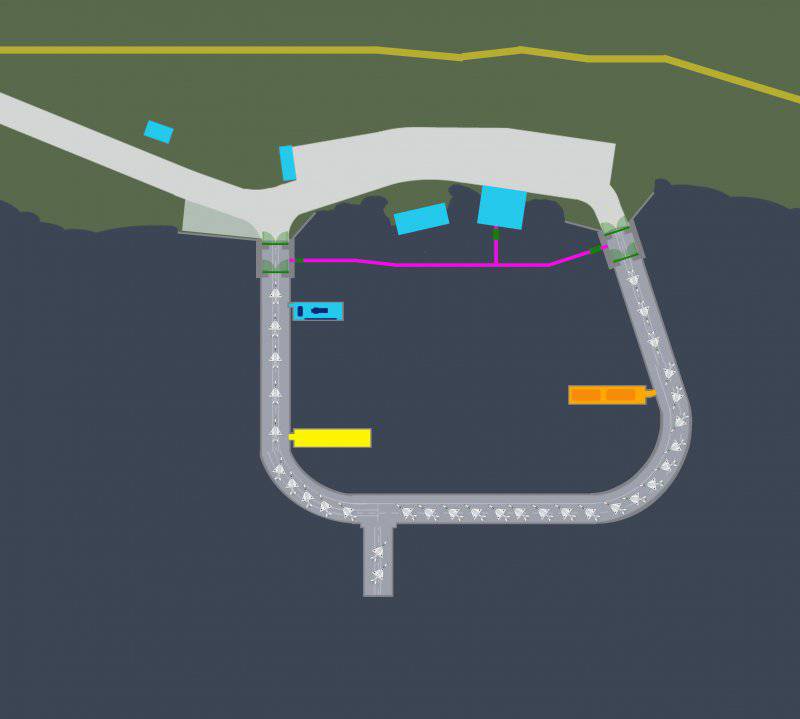 The design of the external explosion-proof gate, observed in Albania, is similar to the well-known images of Chinese explosion-proof gates of underground shelters, but differs from others, having a number of different design features. The explosion-proof gates of the Albanian structures are able to withstand the impact of a shock wave and fragments during bombardment. It is unlikely that one blast-proof gate alone will be enough to withstand modern penetrating ammunition, such as GBU-39 / B or BLU-116 / B. Perhaps they reflect the chronological age of the structure built in the era of "stupid" ammunition. With the inner and outer gates closed, the inner gates are likely to stop small ammunition that can penetrate the outer gates.

The design of the inner gates in these tunnels is not particularly reliable when there is a threat of attack from guided air-to-ground missiles. The penetrating ammunition that pierced the outer gate is likely to knock out the inner door panels or connections between the panels, and even if the ammunition does not penetrate the shelter, it is likely that its power will be enough to jam one or two doors of the gate, eliminating their effective functioning. 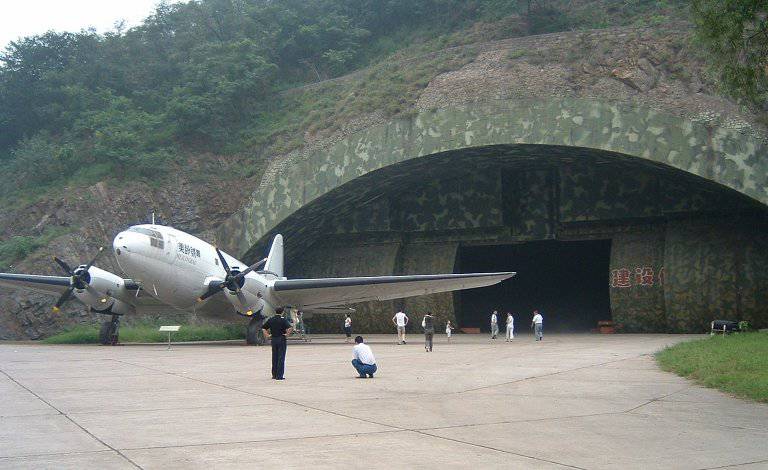 Shelter at the Luyan / Ranghe-Zhen airbase with a movable segmented external gate the size under "Badger". Additional side tunnels were made to ensure normal entrance to the shelter when the outer gate is open. 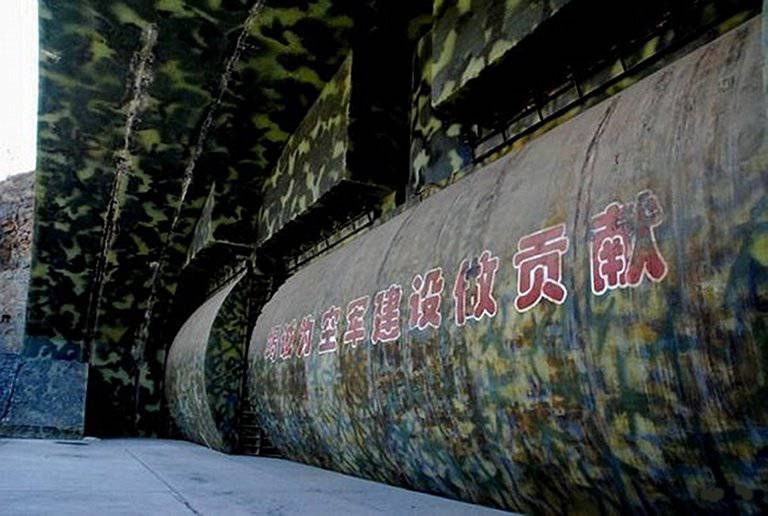 Above and below in detail the outer gate at Luyan / Ranghe-Zhen airbase. 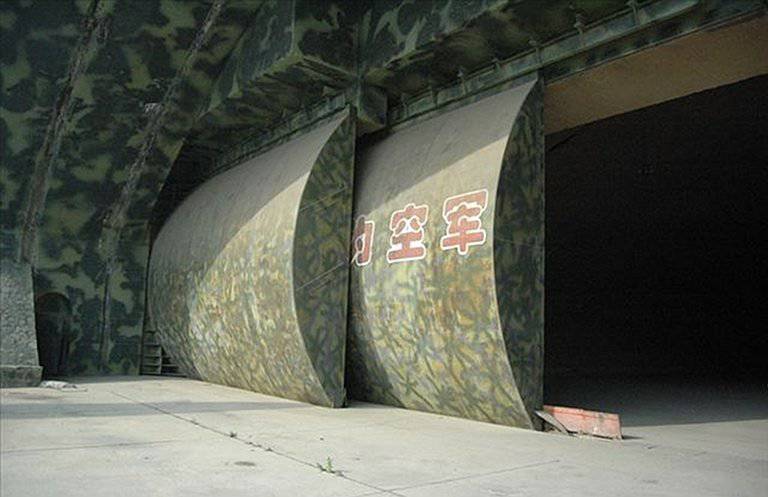 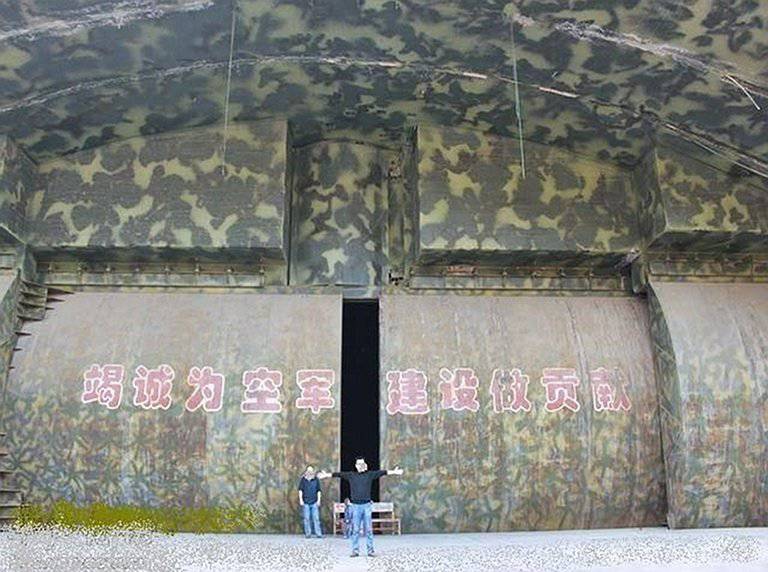 The Luyan / Ranghe-Zhen airbase (see above) and Zhangjiakou (see below) are an explosion-proof external gate the size of "Beagle". Sliding doors usually open in one direction. 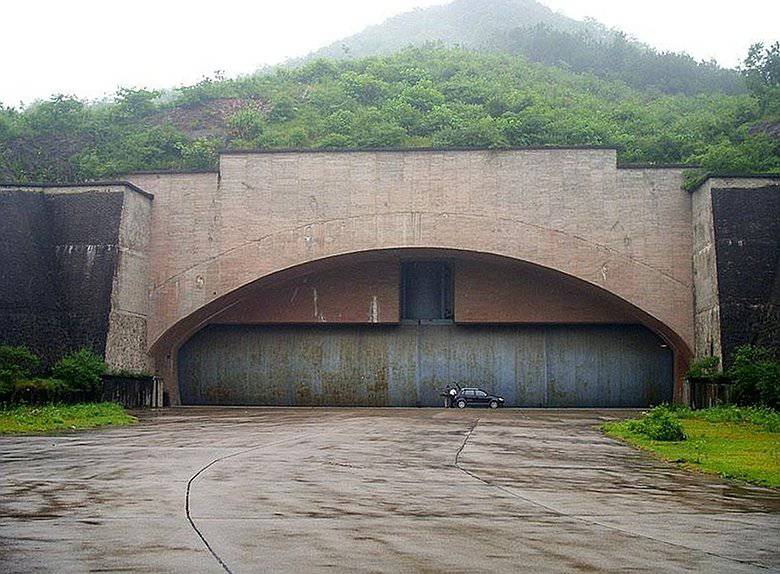 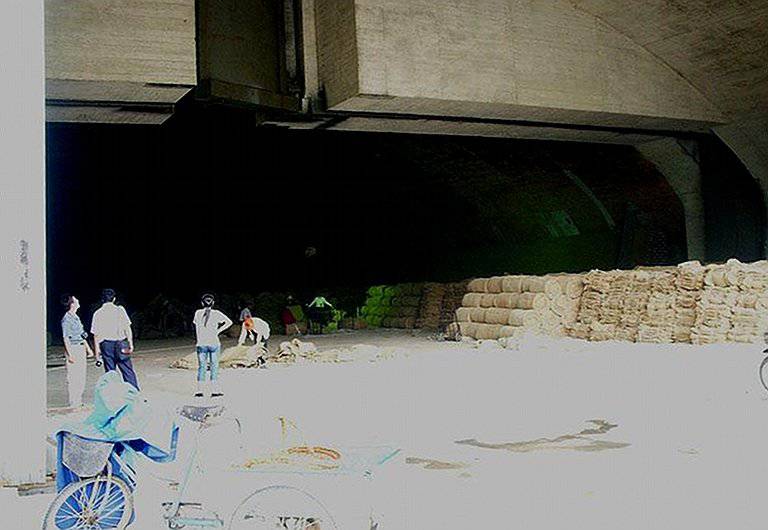 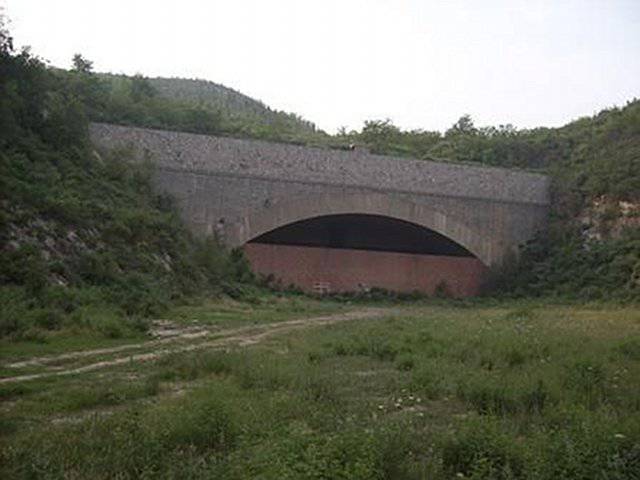 Satellite imagery shows that this is a size-hangar hangar at Luyan / Ranghe-Zhen airbase on the eastern side of the mountain to the south of twin size hangars under MiG is abandoned. A brick wall was built to block the entrance. 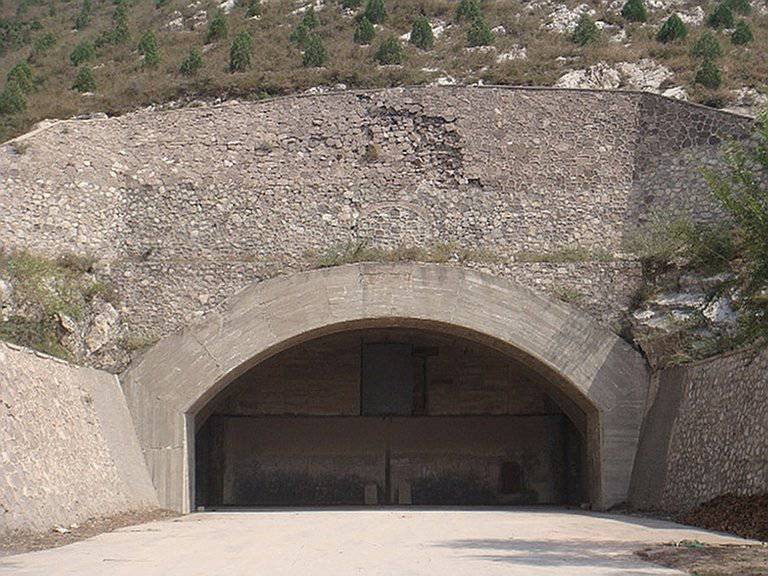 Above and below: Hinged blast doors of the size of a shelter under the "MiG" at an unidentified air base. 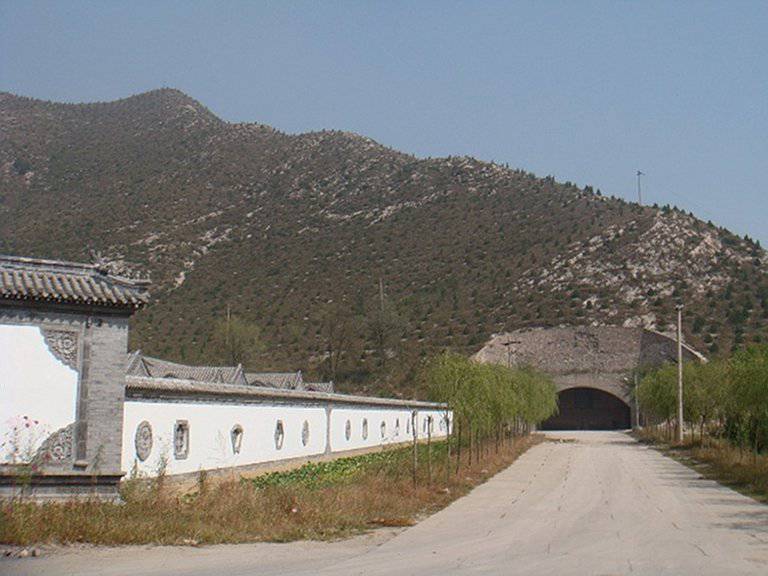 The open mounted explosion-proof gates of shelter are the size of "MiG" at an unidentified air base. Pay attention to the camouflage net stretched over the entrance. 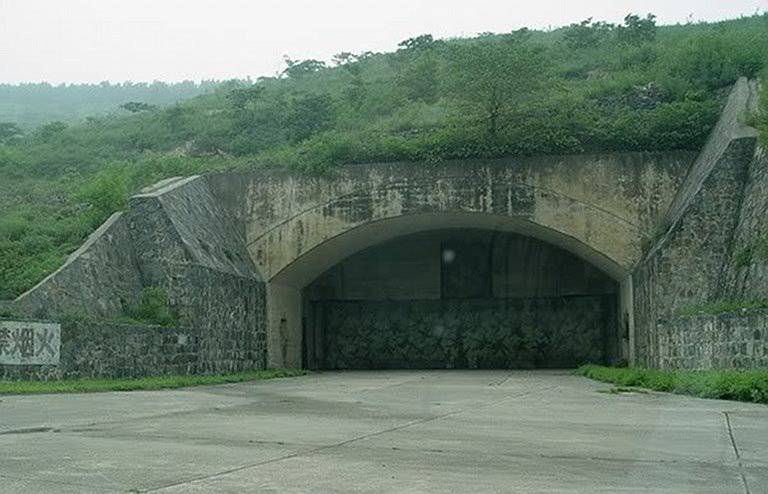 Shelter at the Luyan / Ranghe-Zhen airbase with a movable segmented external gate the size of a "MiG" on the eastern slope of the mountain. 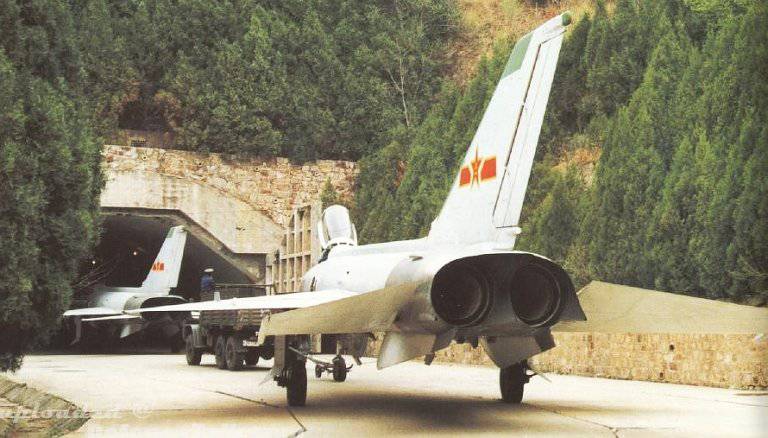 Hinged blast doors of the PLA Air Force underground shelter the size of under the MiG.