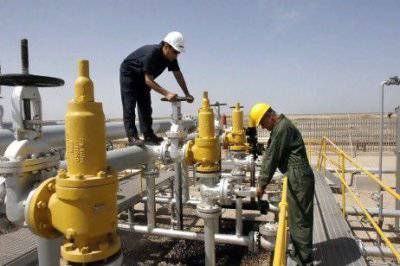 The Lord God did not consider it necessary to place oil and gas only where there are democratic regimes friendly to the United States.
Richard Cheney

It is finished! The proud proponents of global nuclear security, the French, who at one time disfigured half of Pacific Polynesia with nuclear tests, finally got rid of the Iranian oil they hated and already began to "punish" the Islamic republic for its unlimited nuclear ambitions, which threaten the security of the entire planet. The "example" of the French was followed by the great-power British, who, apparently, in the near future will have to manage their own North Sea oil reserves, the price of which has already exceeded 120 dollars per barrel. So, Europe, as she herself wanted, initiating the imposition of an embargo, is slowly losing Iranian oil exports. The most interesting in this stories the fact that the matter is not at all in an embargo, to the full introduction of which is still far away, but in the fact that Iran shut off the European oil valve first, independently and without any emotions and regrets, having done so calmly and with dignity.

Press secretary of the Ministry of Petroleum Industry of Iran Alizer Nikzad-Rahbar: “Iran has no difficulties with the export of raw materials. We have our own clientele, and we have decided on alternatives. We will work with new customers who will easily replace British and French companies. ”

Although the Iranian oil department does not specify who exactly will become its “new customers”, we are certainly talking about the main buyers of Iranian oil - China and India, who have repeatedly warned the West that they are not going to refuse Iranian energy supplies. For example, India only in January increased exports of Iranian oil by as much as 40 percent. Indian Deputy Foreign Minister Ranjan Mathai recently made a statement, eloquently testifying to the independent position of the Indian leadership on the Iranian issue. Here is his excerpt: “India intends to obey only UN sanctions. Other similar measures against Iran do not concern us. We are not going to adapt to them. ” Indeed, what does Europe have to do with this? What is the business of the Hindus, whose numbers have long passed over a billion, before the freezing Old World, besides balancing on the verge of financial collapse? They need to think about themselves. Why should India think about finding an alternative to Iranian oil, which, moreover, is at their side, so it may not cost too much and end very soon? Or was it proposed to the Hindus to support holy British unity, speaking in support of the position of their former metropolis, meekly throwing aside their own national interests? What did the Europeans expect? - Revaluation of own capabilities and self-worth is obvious.

The termination of exports by Iran can be very painful for Europe, especially if we take into account the deadlines set by the EU foreign ministers, who are known to have agreed on the introduction of the notorious oil embargo against Iran in late January. The arrogance of Europeans surpassed all reasonable limits. The term to which EU members dependent on Iranian imports should have been abandoned was 1 July 2012. Thus, the Europeans naively believed that the Iranians would wait for this day like a ship, enjoying the last opportunity to please the European “master” and get from him, even for the last time, the coveted euro currency and precious dollars, and will not look for any alternative. The Europeans have not yet realized the simple thing, which in recent years has become an indisputable truth: the arrogance of Europe is not supported by anything but its ambitions. The decline of Europe is not empty words. This is an objective modern reality. Europe, unfortunately, is no longer the center of the world.

It should be recognized that Iran is winning over Europeans a beautiful victory, at least of a local character, reaffirming the status of a state to be reckoned with, which continues to be respected in the world, having for this not only political, but also quite tangible economic grounds. By its refusal to export oil to the UK and France, Iran seems to say: “Well, sons, if you don’t want meat, gnaw bones, and we will live without you ... You don’t need our oil - fine. Other people really need it. ” And this position can not be called a bluff. Again, the world has changed. The hegemony of industrial Europe, which the rest of the world provided with raw materials, irretrievably sunk into oblivion, but it does not seem to believe in this.

If Iran’s confident position on the embargo and its seemingly paradoxical steps to speed up the cessation of oil supplies to Europe add a very serious argument in the form of a possible total mining of the Strait of Hormuz, through which the lion’s share of Saudi exports to the West passes, the Islamic republic is already seen as some kind of Persian tiger, capable not only not to be offended, but also to dictate its conditions to the completely overwhelming Europeans.