10 May 2017
20
According to the Kommersant Internet publication, the country's military department completed an analysis of the financial and economic state of enterprises of the Federal Special Construction Agency (Spetsstroy), which is being liquidated.

The management of the department was familiarized with the results of the inspection: 17 March report was made by Dmitry Kurakin, Director of the Property Relations Department (since early May working at Rostelecom), in addition, an independent express analysis of the state of FSUEs of FinExpertiza companies was conducted. In the near future, the Minister will make a final decision.
- Explained one of the anonymous interlocutors "b". 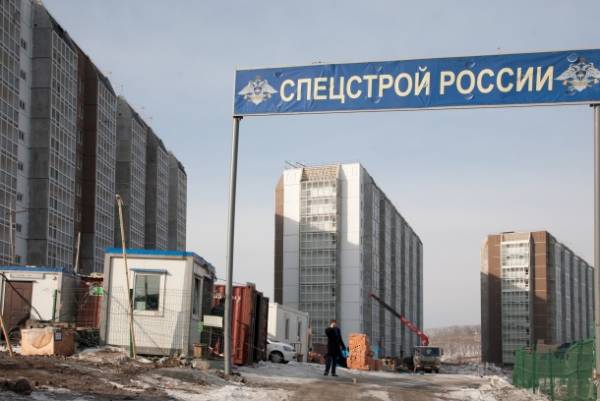 The decision to liquidate Spetsstroy as an independent agency was taken during a meeting with Vladimir Putin with the leadership of the Ministry of Defense. It was due to numerous claims of customers and authorities to the terms of performance of work and financial discipline of the enterprises subordinated to the agency. In December 2016 was decided to transfer the FSUE Spetsstroy directly to the Ministry of Defense.

The problem of reassigning FSUEs is in their pre-bankruptcy state caused by the lack of assets to pay off debts. All enterprises have "cross" debts on unearned advances and penalties to each other: for example, the total payables of enterprises to each other are more than 145 billion rubles, and receivables - more than 154 billion.

The Ministry of Defense believes that organizational and financial-economic optimization should be carried out by consolidating enterprises (instead of 17, creating 8), which will preserve the existing government contracts, minimize the re-contracting process and reduce the “cross” debt.

Five enterprises are proposed to be added to “Spetsstroyengineering”: the first and the third main departments, NGNUMX GUIR, Spetsstroykontrakt and the Central Project Association (TSC). Four enterprises have headquarters in Moscow, and the third Glavk - in St. Petersburg. The first Glavk carried out the construction of industrial and special purpose objects. GUIR N2 performed a full range of engineering and installation work. The third principal director was engaged in consulting on issues of commercial activity and management, the same was done by Spetsstroykontrakt. The Center for Civil Engineering was responsible for engineering surveys, architectural and construction design. To “Spetsstroyservice”, from 2 in April renamed to the main military construction department N17 and performing works on reconstruction and technical re-equipment of enterprises in the interests of the state corporations “Roskosmos” and “Rostekh”, will be joined by “Instroy” (general contract management).

The fourth, fifth, eighth, ninth and twelfth chapters, Spetsstroytekhnologii (construction of buildings), Spetsstroyengineering (general contracting organization) and the General Directorate for the construction of roads and airfields have been proposed to form the basis for the formation of eight enterprises in military districts and special objects. These are the most stable assets: the fifth central board built residential and non-residential buildings, the ninth - was engaged in construction and installation work at industrial facilities, the fourth and eighth - built hydraulic structures and facilities for the destruction of chemical weapons, respectively.

The reorganization will not affect the two federal state unitary enterprises: the management of industrial enterprises and Dalspetsstroy. In the first case, apparently, the reason is the “specificity of the activities” of the Federal State Unitary Enterprise, which is not involved in the production process of building the objects of the Ministry of Defense. And Dalspetsstroy is on the list of strategic enterprises, and the military has no authority to reform it.
Military Reviewin Yandex News
Military Reviewin Yandex Zen
20 comments
Ad