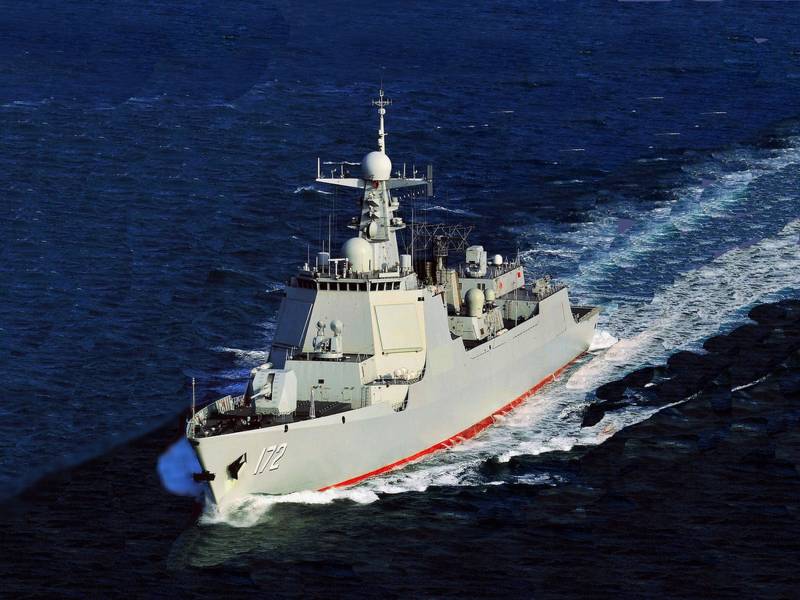 The most high-tech, multifunctional and sophisticated warships of the Chinese Naval Forces in terms of operational and tactical flexibility are missile control destroyers. weapons Type 052D. A series of 12 rocket EMs with a displacement of 7500 tons is equipped with a modern combat information and control system H / ZBJ-1, which has French roots and a conceptual similarity to the American AEgis. Unlike the previous class of Type 052C destroyers, which has a pronounced anti-aircraft / missile configuration due to the HHQ-9 air defense system with 8x6 vertical revolving type, the Kunming Type 052D is the first most multifunctional class of Chinese surface warships. This is achieved by equipping 2x32 modular PU on the 64 transport-launch container (cell), which are adapted to the use of anti-aircraft, anti-ship, strategic cruise and anti-submarine missiles. The “core” of the H / ZBJ-1 combat information and control system is a multifunctional radar with Type 346A AFAR, presented by 4-sided AR (similar to the MRLS of the earlier version of Type 052 was installed on the Type 346C).

The development of this radar began at the end of distant 80-ies. within the walls of the Nanking Research Institute (formerly known as the 14 institute), whose main competitor was the 2 research institute of the 23 research institute belonging to the company CASIC. A tough competition broke out between the two development units, which was reinforced by a serious crisis of investment in the defense sector of the economy by the Central People’s Government, which only fueled interest in the project. After all, the winner in the strategically important program for developing a promising ship MRLS could count on 230 million ¥ for the development of the scientific and technical base and the modernization of production facilities. Experts of the Nanking Research Institute, previously familiar with the subtleties of designing and manufacturing radar components with phased antenna arrays, won the race against the 23 institute, and it was their Type 346 product that became the basic element of the future radar destroyers Type 052C and Type 052D. Up to the second decade of the 21st century, this unique (compared to the American AN / SPY-1D) radar was almost unknown, but just a few years ago, scattered “bits” of data appeared on the network, which can be used to create a fairly clear portrait of the product.

If you take a close look at the EM Type 052C / D radar architecture, you will not notice on the add-on elements of the continuous-radiation “radar searchlights” of the AN-SPG-62 used for highlighting targets operating in the X-band and having a total 1 target channel for one “spotlight”. For this reason, we hurry to sadden all the bloggers who are committed to the concept: "Type 346 is the worst copy of the American AN / SPY-1A / D."

In reality, we face one of the best examples of Chinese radar engineering. Type-346, in contrast to the staffing AN / SPY-1D, can be considered a full-fledged multi-function radar that allows you to simultaneously scan the earth's surface at the coastline, surface and aerospace, as well as capture HHQ-9 for shelling more than 16-20 with anti-aircraft missiles. standard and ultra-small enemy targets. For this purpose, the receiving and transmitting modules of the canvas of each of the four AFAR Type 346 are divided into 2 groups.

The first one works in the S-range (2-4 GHz frequency), designed for long-range target detection, linking their tracks, as well as possible targeting for anti-aircraft missiles with active radar DSS-10A (as is known from the architecture of the European shipboard air defense missile system " PAAMS ", S-band radar" EMPAR "and" Sampson "is used for targeting missiles with ARGSN" Aster-15 / 30 ").

The second group forms the so-called “shooting array”. Consequently, it is represented by several thousand transmit-receive modules of the centimeter C-band (frequency 4-8 GHz). This group of anti-personnel missiles is intended for tracking high-resolution targets, as well as their illumination for HHQ-9 anti-aircraft interceptor missiles. Unlike the Idzhisov single-channel AN / SPG-62 RL spotlights operating in the C-band AFAR sector, the Type-346 stations are able to “light” several air targets at once, due to which the performance of the HHQ-9 complex during raids "PKR will be significantly higher. After all, the Aegis family of ships using the PARGSN SM-2ER missiles depends solely on the number of AN / SPG-62 radars (Ticonderoga - 4, Arley Burk - 3). More or less, the position of the Aegis improves only the arrival of the interceptor missiles RIM-156B and RIM-174 ERAM equipped with active radar homing heads, or auxiliary IR sensors.

The architecture is a bit similar to the Chinese Type 346 in the Japanese-Dutch radar station FCS-3A, which is designed to control the Evolved Sea Sparrow Missile SAMs of the RIM-162B modification (the improved Sea Sparrow, not unified with the Aegis system). The FCA-3A station, developed by the joint unit “Thales” and “Mitsubishi Electronics”, is installed on multi-purpose destroyers of the class “Akizuki” and the helicopter carriers “Hyuga”. For review and maintenance, 4 large centimeter C-band antenna arrays are used here, and even higher-frequency small X-band AFAR are used to capture and illuminate targets. The main structural difference between FCA-3A and the Chinese Type 346 is the separation of survey and “firing” AFAR-sectors in the form of separate antenna arrays. In terms of the survivability of the radar complex, the Japanese-Dutch concept, no doubt, looks more attractive. The Chinese, on the contrary, are better in terms of ergonomics, since the repair of the decimeter and centimeter anti-personnel mines as part of a single antenna array requires a much smaller number of highly qualified officers of the destroyer. 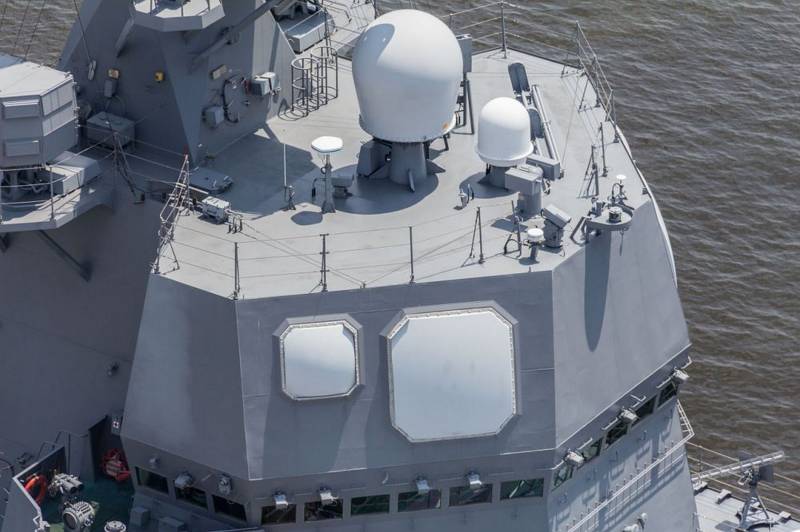 The American company “Ratheon” has chosen the path of modernization of “Ajis”, which corresponds to the Japanese concept FCS-3A, which is expressed in the updated version of AN / SPY-6 (V) AMDR (“Air and Missile Defense Radar”). Here, in addition to the AFAR AN / SPY-1D, a new 3 / 4 X-band X-band antenna post will be integrated, which will be located in an additional towering superstructure of the UR class “Flight III”. At the same time, judging by the sketches, the Americans will leave the classic radar for highlighting AN / SPG-62 for safety, due to which the AMDR is considered a “three-band radar”. This technique will also significantly improve the Aegis’s anti-missile capabilities, but it will make the system more complex and cumbersome in comparison with the Chinese H / ZBJ-1 equipped with light dual-band Type 346 radar.

As can be seen now from technical sketches and ground test mock-ups, the advanced heavy destroyers of the Chinese Navy Type 055 UROP will also receive similar Type 346 multichannel radar systems that can easily cope with all types of air threats in a difficult jamming environment. Four ships of this class, surpassing the size and displacement of the American Ticonderoga cruisers, are safely completed at the shipyards in Shanghai and Dalian. Their precision arsenal represented by surface-to-air missile DK-10A, HQ-9, HQ-16, anti-YJ-83, YJ-18, strategic CJ-10A and ASW YU-8, housed in 122-128 transport and launch container two modular PU in the bow and stern parts, which will exceed the Type 052D ammunition 2 times and reach the performance of "Ticondero". In the same turn, the more advanced capabilities of the Type 346 radar will give the Chinese ship and carrier strike groups a serious advantage over the American AUG in terms of building defenses against massive strikes by LRASM anti-ship missiles. The only noticeable flaw in the Chinese is the temporary absence of sea-based exoatmospheric sea-based interceptors, similar to those of the American SM-3 Block IB, due to which the possibilities in the fight against the MRBM and the enemy's ICBM will currently be seriously “limp”.