6 May 2017
3
A unique interregional artery was built in record time, taking into account the practice of water-transport construction in the US and foreign Europe, but using domestic technologies that turned out to be advanced at that time.


The economic significance of the canal consisted primarily in the fact that the actively developing economic ties between the Central Economic Region (CED) of the USSR and the Volga region were less dependent on rail and road transport. The capacity of land highways in this direction remained insufficient until the middle of the 60-x. In addition, the canal dramatically improved the water supply of the capital, which required ever-increasing volumes from the second half of the 20-s.

The idea to connect the Moscow River with the Volga was first put forward by Peter I at the beginning of the XVIII century. The project was planned under Paul I. But the construction did not take place. One of the reasons is the reluctance of foreign experts invited to build the canal to strengthen Russia's economic power.

The need to connect the Volga with the Moscow system increased sharply by the end of the 20-s, when the population of the capital exceeded three million people. But the water supply of the metropolis remained on 90 percent "tied" to the resource of the Moscow River. This led to the fact that already at the beginning of 30's it was possible to wade in many areas. Only 90 liters of water accounted for every resident of Moscow at that time per day, while in other megacities of the world, the rate reached 500 liters. In the 1929 USSR Council of People's Commissars, he ordered the development of a corresponding project. By 1931, three options were proposed; as a result of expert discussions, the government approved Dmitrovsky at the beginning of 1932 (that is, through the Northern Moscow Region). And June 1 issued a decree to start construction. 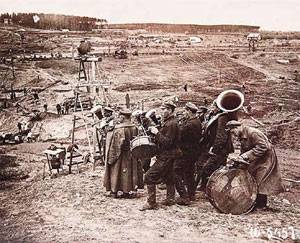 Naturally, the route required first of all clearing any objects. 7505 peasant farms had to be moved to other areas of the Moscow region and to neighboring areas.

It is obvious that at that time the state was interested in the maximum reduction in the cost of construction work. Therefore, as in the construction of the White Sea Canal, prison labor was widely used. It was created Dmitrovlag. But we note, about a third of such labor for the shock labor received early release with the restoration of rights.

During the construction of the Moscow-Volga canal, 171 excavators, 160 steam locomotives, about three thousand cars and tractors were used. In the majority of Soviet production, since already at the beginning of the 30s in the country, thanks to industrialization, production of many types of equipment and vehicles was launched. At the beginning of 30, some media in Germany and the United States noted that the USSR gave the West an industrial and engineering-technical surprise, since such a grandiose water-transport construction is based on its own technological base, and the import of road and earth-moving machinery is minimal. Johan van den Neil, a Dutch expert on transport policy, acknowledged that if the Russian tsars invited his compatriots to develop the water transport network, then Belomorkanal and Moscow-Volga show: now the Netherlands has a lot to learn from “post-monarchical” Russia.

The construction of the 128-kilometer channel took only 4 of the year and 8 months. This, we emphasize, is a record for projects of this kind. For example, the Panama Canal with a kilometer length of 81 built 30 years, 175 kilometers of Suez - 11 years ...

4 June The 1937 government decided to open a canal for regular passenger and cargo navigation from 15 in July of the same year.

The shipping channel width is 55 meters, the guaranteed depth is four meters. The most complex hydro-technical complex of the canal today includes about 240 facilities, the largest of which are 9 hydropower stations, 11 locks and 5 pumping stations. The infrastructure provides not only shipping, but also the regular flow of Volga water to Moscow.

Without exaggeration, the channel played a prominent role in the defense of the capital. It became a strategic barrier for the fascist troops advancing on Moscow. In the autumn of 1941, the floodplains of Yakhroma and the Sisters were flooded due to the spillway. Later, when the Wehrmacht could take advantage of the freezing, the invaders in the same way cut off the path to Moscow from Kalinin. But by August 1942-th channel was almost completely restored for shipping.

Since the mid 50s of his flotilla constantly replenished with new cargo and cruise passenger ships. The latter enjoyed growing popularity, especially on routes to the Volga-Kama and Caspian basins, to the Volga-Balt.

But with the restructuring, the maintenance of the water artery worsened, the fleet began to age rapidly, as a result, the decline in cargo-passenger traffic accelerated. In 2005, long-distance flights were abolished (Moscow - Astrakhan, Moscow - Perm, Moscow - Rostov-on-Don), which existed from the end of the 30-x - the beginning of the 50-x. And since 2006, the regular movement of hydrofoil ships (of the “Rocket” type) has been canceled along the canal’s route. Cargo ships now deliver only bulk construction materials (gravel, sand, crushed stone) along this line, although until the middle of 80's the “assortment” of shipments exceeded 30 names. Cruise and passenger navigation is mostly limited to the Moscow region, Tver and Yaroslavl regions. But it must be said, the demand for such routes has not been waning since the beginning of 2000's.

In 1937, upon commissioning, the facility received the official name “Channel Moscow - Volga named after Stalin”. But at the beginning of September 1947, when the capital's 800 anniversary was celebrated, Iosif Vissarionovich ordered to name the channel in the name of Moscow. According to Stalin, “thanks to the canal, Moscow has become a port of five seas, its water supply has improved by an order of magnitude, commodity exchange and passenger traffic with neighboring areas have increased. This project is directly linked to history the capital, and with its development in the Soviet period. Therefore, the name of the channel should reflect the specific purpose of this path. ”

23 April 80-i navigation opened on the historic highway.

Hungarian, Romanian, Yugoslav experts in 50 – 70-ies recognized that the experience of creating and operating the Moscow-Volga canal was used in the construction or reconstruction of the Danube-Tisza, Black Sea-Danube navigable arteries, as well as in the development of the trans-Balkan waterway Danube-Vardar - Aegean Sea. Iranian experts, while working on the Caspian-Persian Gulf transcontinental project (“Bypassing the Bosphorus”), are still turning to unique Soviet experience.