16 May 2017
16
Enemy troop transports are desirable prey in all wars. The attack on the transports had its own specifics and often led to serious losses for the attacker. About several indicative episodes from stories Russian front of the First World War - this article.

30 August 1914, the 41 Infantry Division of the 16 Army Corps followed the Austrians defeated by Bhyhah through the metro station Modlibožice, Pikule and further south. An infantry regiment, two artillery batteries and a Cossack squadron followed in the forefront of the division.

During the march, information was received from the patrols that a large enemy transport was in the glade near the village of Pikule under the cover of infantry. The head of the avant-garde decided to attack him and ordered his fighters to speed up.

Der. Pikule, consisting of several courtyards spread out in disarray, lay in a forest clearing, and had a length of about 500 steps and almost the same width. The road cut the clearing in half, and its northeastern half, stretching to the forest, was marshy and, accordingly, was only accessible to infantry, while the western and southern parts were dry. The road to the south of Pikule had a planked flooring.

The transport of the enemy came from Janov. It included more than 1000 carts, stretching on a hike to the 15-kilometer distance. The cover of the convoy is the battalion of the German infantry. The transport cover was dispersed, being both behind the wagons of the wagon train and behind the village houses.
For the attack of the transport forces were selected, which included in their composition 2 guns and 6 infantry mouth.

The battle began at noon.
As soon as the first shots thundered, almost all the convoy ran away, part of the carts rushed in different directions and got bogged down in the swamp. Many baggage horses died or were injured. Der. Pikule caught fire - the Germans set it on fire, hoping that the fire would also destroy the cargo of transport.

In 16 hours of 30 minutes, the remaining non-wounded 54 fighter from among those who defended the transport surrendered to Russian captivity, while the rest were killed, wounded or fled.

The 41 Infantry Division lost in this case the killed and wounded 150 people (including the 1 officer was killed and the 3 was injured). More than 1000 wagons with cargoes, which consisted of: shells, hand grenades, flour, oats, linen, equipment, hospital accessories, chocolate and cigars, became trophies. 64 horses, 2 camp kitchens, a motorcycle and 6 bikes were also captured.

The mistake of the avant-garde commander of the 41 division was a waste of time firing into the cover of the transport — after all, using superiority in strength, they immediately attacked the enemy with hostility. The result would be achieved faster and with less sacrifice. It is also not clear why the Russian avant-garde did not surround the transport from all sides, attacking it only from the front.

Due to the active actions of the Russian cavalry by the beginning of June 1915, the operational situation in the Baltics on the Shavel direction was temporarily stabilized.

The formations of the German equestrian corps E. von Shmettov (2-I, 6-I, 8-I cavalry divisions) were thrown on June 2-th. Jizhma - to the boundary of Schwendra - Poshimší - the Gelze swamp.

Almost immediately after the famous equestrian attack near Popelyan, parts of the Ussurian cavalry brigade continued to operate actively - on June 3, they attacked Trishki - Dyrsheyka.

On June 5 they received an order to carry out a raid into the German rear. The Maritime Dragoon Regiment was in the forefront of the brigade - and so the story was ordered that it was he who again managed to distinguish himself, now in the second case, all under the same Popelyans.

Received intelligence on the movement of 2 enemy transports, each tentatively in 75-100 carts. The regiment division (5 and 6 squadrons), carrying out the personal order of the brigade commander, Major General A. M. Krymov, crossed the river. Virvita, attacked the enemy wagon train. Sheltered behind the wagons, the Germans put up fierce resistance. The dragoons had to attack three times, but, ultimately, despite the fire at close range, the transport was captured. 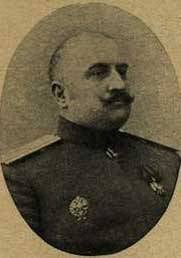 During the attack on the transport, the Primorsky Dragoon Regiment lost 3 officers (both commissaries died - commander of the 5 squadron, staff captain Saveliev and commander of the 6 squadron, Lieutenant Yurenev, as well as a junior officer of the 6 squadron Cornet Loginov) and 19-s squadron, and 900, and 20, and 57-junior officer Cornette Loginov and 11. and 100 is injured. The German transport, which included 64 vans, was captured, and the 3573 officers and officers and the 1 privates were destroyed. Part of him died, and 17 people were captured [RGVIA. F. 28. Op. XNUMX. D. XNUMX. L. XNUMX Rev.].

The Stavka report also noted this fact, stating that in the Shavelsky region the Russian cavalry, acting in the enemy rear on the road between the villages. Telše and Luknyshki, captured and then burned the enemy vehicles (the main load - ammunition), destroyed a lot of convoy, rangers and cavalrymen of the enemy. 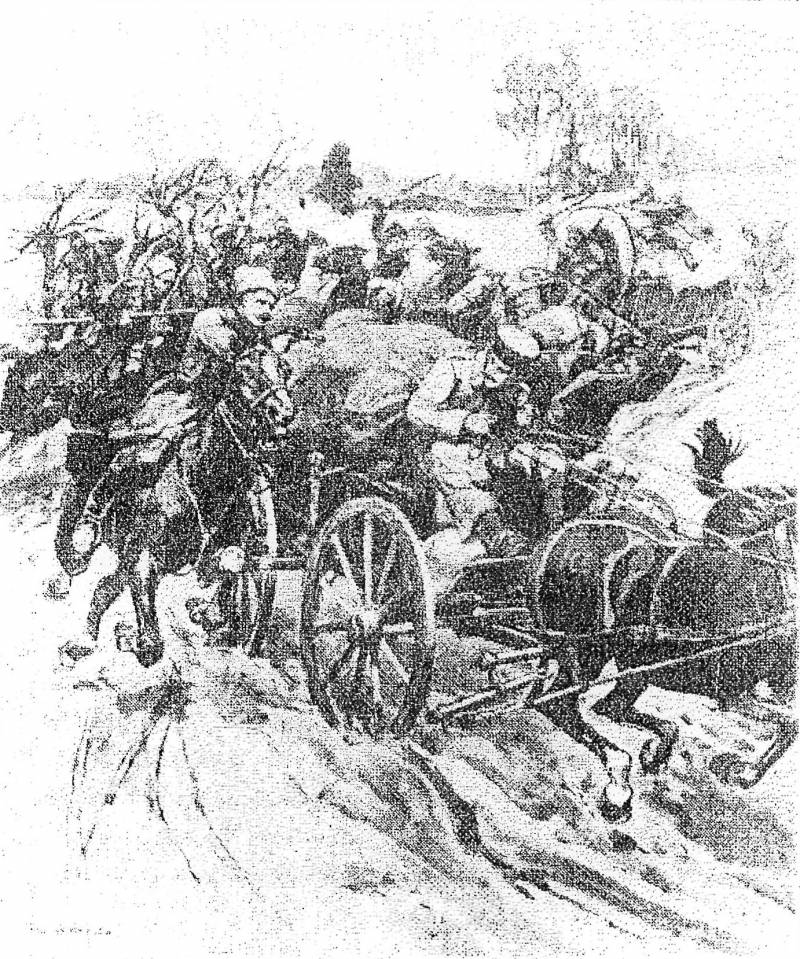 Colonel M. Pozek, chief of staff of the 1 th German cavalry corps during the fighting in the Baltic States, noted that “the Raid of the Ussurian brigade of General Krymov to the rear of the German location was a success. The telephone network of the Germans was destroyed over a large distance along the front and in depth, and the supply of food to the 2 and 6 cavalry divisions was interrupted for 24 hours. ”

Commenting on the June 5 raid of the Ussurians, he noted that the Russian cavalry brigade with 4 machine guns and 2 guns, breaking through between Trishki and Telšель, destroyed the 2 th cavalry division west of Lucniki. Moreover, the colonel noted that at the battlefield, the dead Germans were found partially disfigured and with necks cut (in all likelihood, the theme of “Russian atrocities” is the favorite plot of German propaganda), and the wagons of the convoy were burned or smashed. M. Pozek also recorded that the Russian cavalry then attacked south-west of Lukniki and the convoy of the 6 Cavalry Division. But the last column stubbornly defended itself and managed to reach Zhorany, where at that moment there were two more columns. Their joint efforts managed to repel the Russian attack. And 300 soldiers of the newly arrived mid-flight reinforcement for the 18 Infantry Regiment repulsed a repeated attack on Lucnik [Pozek M. Germanic cavalry in Lithuania and Kurland in 1915. M.-L., 1930. C. 95].

In the latter case, we are talking about the actions of the 2 and 3 squadrons of the Primorsky Dragoon Regiment, moving to Lucniki. Take a place they could not. 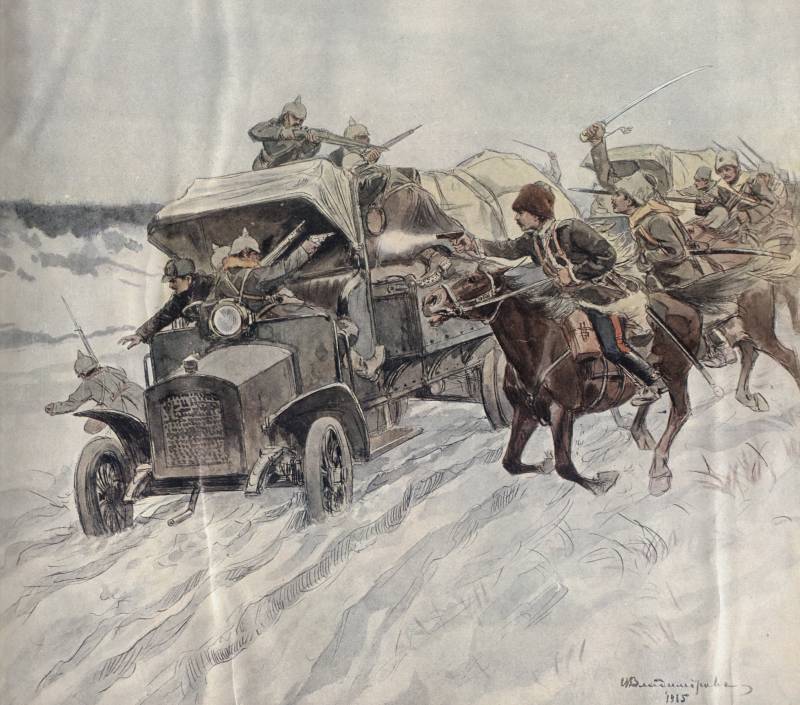 Opponents turned to battles that were purely tactical in nature. Parts of the Ussuri horse brigade continued to be active in the Shavelsky region. So, 11-th June, interacting with the 19-m Don Cossack regiment, the Primorsky Dragoons regiment again made a horse attack, knocking out dismounted Saxon raders from a grove. After that, on foot, squadrons filled the front gap, formed by the village. Zubiki after the withdrawal of the Cossacks-Ussurians, who lost their centenary commander. The regiment lost in these battles 5 dragoons killed, 12 wounded and 1-th missing.

We see that units of the Ussurian horse brigade in general and the Primorsky Dragoon regiment in particular committed not only brilliant cavalry attacks - they were able to act on enemy communications, which, in conditions of the length of the latter, was especially painful for the Germans, who had defended their wagons to the last. The June 5 raid had as a result, in addition to the destruction of food divisional transport, a break in the supply of enemy troops and a disorder of the telegraph communication system of the left flank of the German army that lasted for several days. Having delivered a sensitive blow to the enemy, the Russian brigade, as the German eyewitness writes, managed to withdraw without losses, despite all the attempts of the Germans to surround it - because it was helped by "the knowledge of the area and the assistance of the local population."