4 May 2017
70
The American power structures will arm with the new gun. The commanders of the Air Force, Navy and the US Marine Corps officially adopted the M17 pistol - a modification of the SIG Sauer P320, designed to meet the requirements of the US Department of Defense, reports "Warspot" with reference to the portal kitup.military.com 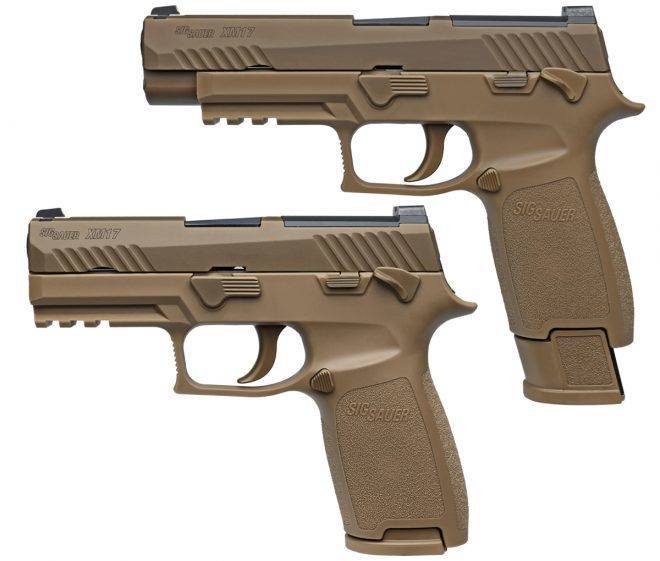 M17 will be delivered to the troops in full and short versions.

The ground forces, the Air Force, the Navy, and the Marine Corps are separate types of US forces, and their commands can make decisions about the use of certain models. weapons. Therefore, their consent to rearmament remained the last obstacle to the entry of the M17 pistol into the troops.

The winner of the tender XM17 Modular Handgun System was announced in January of this year. It turned out to be a gun M17 - modification SIG Sauer P320, designed to meet the requirements of the US Department of Defense. The new pistol will be delivered to the troops in the 9 × 19 Parabellum caliber, while the manufacturer indicates that the weapon is modular and can be easily converted to fire .357SIG and .40SGW cartridges.
Under the terms of the tender, the US Department of Defense signed a contract with SIG Sauer for the production of 280 000 pistols in the amount of $ 580 million. Thus, the cost of one gun with a set of accessories and warranty service will be about $ 2000 (civilian modification of SIG Sauer P320 costs about $ 450) . At the same time, the second finalist of the tender (the company Glock, which presented the latest modifications of the Glock 17 and Glock 19 pistols) appealed the decision of the Defense Ministry, and in June of this year the Government Accountability Office should make its decision in this dispute.