China and the United States - a military confrontation?

February 20 2012
31
For a long time, analysts have been scaring the world community with the annual growth of Chinese military power. In light of the rapid growth rates of Chinese budget military spending, the United States began to serve as a constant, if not the only, object for comparison with the PRC. 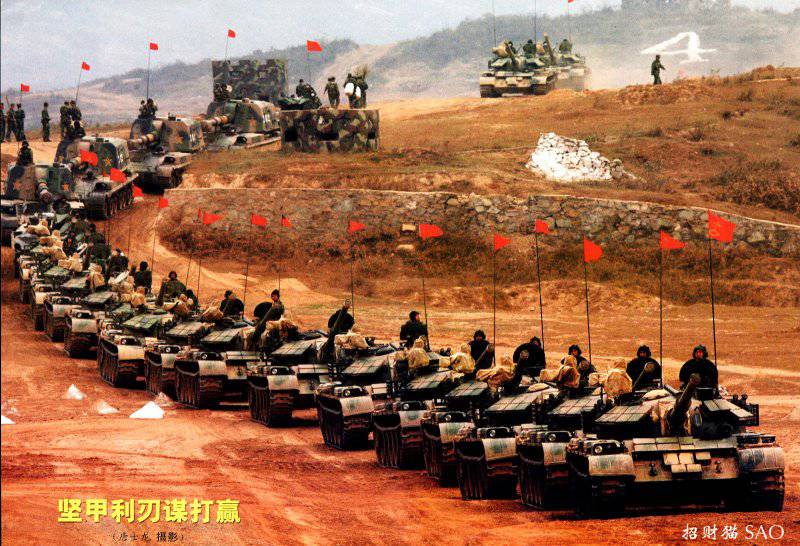 For the past two decades, the PRC has steadily increased its military budget; over the past ten years, its annual growth was on average 12%. In addition, Beijing every year more and more attention is paid to the improvement of military equipment and technology, gradually reducing the number of military personnel.

Against this background, it is noted that the United States, listed as potential opponents of China, reduces military spending. Before 2017, the Pentagon plans to reduce defense spending by 259 billion dollars, and for 10 the next few years - by 487 billion dollars. At the same time, the United States, like China, is going to equip the armed forces with the latest technology.

February 13 Barack Obama requested 613,9 billion dollars from the Pentagon Congress for the needs of the Pentagon (for the 2013 fiscal year). And this amount - on the "curtailed" program. From this it is obvious that China, at least on the scale of financing military expenditures, is still far from the United States.

Meanwhile, in terms of military spending, China is ranked 2 in the world - just after the United States. In the past two years, the defense expenditures of the PRC grew at a faster rate than in the last twenty years - by an average of 16,2%. However, Western experts (with their known tendency to hyperbolization) believe that China underestimates its military spending - as many times as 2-3.

It should be noted that the issues of building up the Chinese defense budget — amid the American economic crisis and defense savings in the States — are of great concern to Washington. The Pentagon has information about the construction of new submarines in the People's Republic of China, about the modernization of the missile forces and the nuclear weapons. 13 February 2012, Vice-President of the People’s Republic of China Xi Jinping began his visit to the United States, during which meetings with the President, Vice President and Secretary of Defense of the United States are scheduled. Along with the growth of Chinese military power, the expansion of the US military presence in the APR will also be discussed at meetings.

The increase in tensions between the US and China is also connected with the adoption of a strategic document in Washington on 3 in January of 2012 in Washington: “Sustaining US Global Leadership: Priorities for 21 Century Defense”. The strategy states that the strengthening of China in the long run may affect the economy and security of the United States. The key points in the adopted US military strategy are reduced to a reduction in the number of American armed forces while simultaneously concentrating budget resources on the development of satellites and unmanned aircraft. The strategy also implies a reorientation of resources to the APR. According to media reports, Washington is going to deploy troops in Australia and send additional warships to Singapore and the Philippines.

It is also known that in August of last year, the Pentagon published a report, which reported on the re-equipment of the Chinese army, which poses a threat to neighboring countries. In response, the Chinese authorities demanded that the United States recognize that normal defense construction was underway in China. Representative of the Ministry of Defense of the PRC, Yan Yujun, said that in the conditions of the growth of the NTP, the modernization of weapons is a completely normal process, and the United States called the suspicions "perverted" and "not having any basis." In the same August, the 2011 of China was launched by the first aircraft carrier (the former Varyag), built in the USSR, bought from Ukraine and modernized. The appearance of "Varyag" also caused a rise in tensions between China and the United States. In addition, the Pentagon is waiting for the appearance of Chinese aircraft carriers - that is, of its own construction - by the year of 2015. True, 9 in January 2012 was spoken by the Ministry of Foreign Affairs of the PRC, Liu Weimin, in the sense that Washington misinterprets Beijing’s intentions to modernize its armed forces and that China continues its peaceful development.

In early January, 2012, Mr .. Barack Obama said that the budget cuts in the country's military spending will not affect the ability of the US to withstand competition with strategic opponents. Quote: “Among the strategic opponents of the United States, Obama singled out Iran and China. Regarding the latter, the president remarked that in the long run Beijing will have an increasing influence on the economy and the military sphere of the USA ”(source: http://lenta.ru/news/2012/01/05/obama/). Lenta.ru also quoted the head of the Republicans in the Parliamentary Committee on Armed Forces, Bac McKeon, who criticized the Obama program to cut military spending: “The president must understand that the world has always had and will have a leader. While America is retreating, someone else is moving forward. ” Obviously, it was China that was meant by the first of “someone”.

As recently reminded by the Military Parity (http://www.militaryparitet.com/perevodnie/data/ic_perevodnie/1940/) with reference to the South Korean newspaper “The Chosunilbo”, in 2008, the Academy of Sciences of the PRC made a forecast, “according to which the military the power of this country will be equal to the USA after 2050, but it will take at least 20 or 30 years to finally surpass America in the military field. " At the same time, the “Military Parity” notes that in recent years, China has been rapidly increasing its armaments of the Air Force, Navy, and is making progress in space and rocket technology.

The Wall Street Journal reported in the 4 issue of January 2012 in the issue of the newest potential confrontation between the US and China (article by D. Barnes, N. Hoxha, D. Page). The article was about the construction of the American military aircraft carrier Navy "Gerald R. Ford", which soon (not earlier than 2015) would have been something of a guarantor of US naval superiority in the next half a century. But the fact is that Beijing has created a new DF-21D ballistic missile that can hit a moving ship at a distance of about 1.700 miles. This was stated by the Chinese state media. At the same time, American defense experts report that the newest Chinese rocket is capable of hitting a target from an angle that is too high for American defenses sliding above the sea, and at the same time too low for defenses against ballistic missiles of another class. The angle of the DF-21D (by the way, not yet deployed in the PRC) is such that even if the means of protection hit one or two missiles, the others will reach the target.

By the way, the rocket attack on Gerald R. Ford, as noted in an article in the Wall Street Journal, would endanger almost five thousand seamen’s lives. The crew of the aircraft carrier is huge, and the number of potential victims may exceed all the losses of Americans in Iraq.

In January, 2012 in Beijing conducted the first tests of the J-20, which is not detected by the latest fighter radars. This fighter allows China to strike, according to experts, at a very long distance - right up to the US military bases in Japan.

Chinese submarines are also very worried about US military experts. The newest or upgraded submarines stay under water for a long time and move silently. There is a case that happened back in 2006 year: the Chinese submarine was in the center of the compound of American warships and was not noticed by the Americans until it surfaced.

As a result, the conclusion suggests itself that the military power of China - in comparison with the US - does not necessarily have to be expressed in the multibillion-dollar amounts spent on the defense budget. Currently, we should talk about military-technological rivalry. For example, a new Chinese rocket may well force US warships to stay away from Chinese shores. Most likely, they will indeed keep a reasonable distance.

The answer of the Americans to the development of the newest Chinese missiles may be the creation of the above-mentioned unmanned aircraft that could take off from aircraft carriers at sea and stay in the air longer manned aircraft.

So, there is no reason to talk about open confrontation between China and the United States. It’s too early to talk about parity between the military forces of the United States and China. 2050 year? .. Today, all the forecasts for such a remote date look, perhaps, fantastic. Far more fantastic than the well-known statements of sociologists that by the middle of the twenty-first century in the United States, half of the population will speak Spanish. Rather, it is true that Beijing is trying with all its might to reduce the influence of US military power in the Asia-Pacific region while simultaneously raising the technological component of its army, rather than Beijing’s desire to “overtake and overtake” America militarily. “Overtake and overtake” is a well-known Soviet “doctrine”, which has not rational, but emotional roots. And the PRC’s military-political strategy hardly has anything in common with it.

Therefore, now it is not only early, but also unnecessary to make predictions about which of the two powers “outbid” each other - with rockets, aircraft carriers or unmanned aircraft. The goal of the PRC, it seems, is not to achieve military parity and, all the more so, a clear superiority over the United States, but to increase its influence in the APR — or, if you will, weaken Washington's influence in this region.

Ctrl Enter
Noticed a mistake Highlight text and press. Ctrl + Enter
We are
Global Firepower rating. April 2015 of the yearThe global crisis and the "yellow threat" led to the arms race in the Asia-Pacific countries
31 comment
Information
Dear reader, to leave comments on the publication, you must to register.