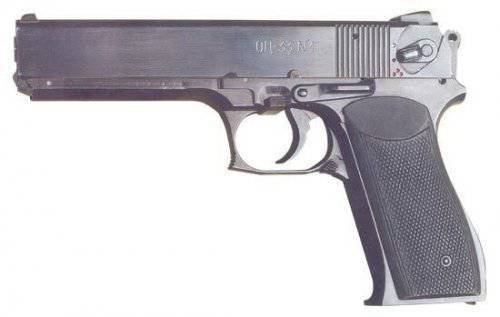 After removing the APS from the armament of the army units, it was used in the units of the special services. In the year 1993, commissioned by the Ministry of Internal Affairs, an attempt was made to modernize the MTA. It was planned to replace the modified 5,45-mm and 7,62-mm Kalashnikov assault rifles with a modified gun. But, for several reasons, this work stopped at the very beginning. At the end of the same year, the Ministry of Internal Affairs signed an agreement with the Tula TsKIBSOO to develop a new automatic pistol chambered for the 5,45 MPTs. The topic entrusted to the team under the direction of Igor Yakovlevich Stechkin, and then the gun, was called "Dart".


The low power and weak stopping power of the 5,45-mm bullet cartridge significantly limited the scope of the new weapons. Already in July, the 1995 of the OTs-23 “Dart” pistol is planned to be modified under the chambered 9x19 “parabellum”. The new development interested the Ministry of Internal Affairs, and by the end of the same year TsKIBSOO received an order for the development of an 9-mm automatic pistol, but under the standard 9x18 PM cartridge in standard and enhanced versions. In April, the first model of an 1996-mm automatic pistol, called OTZ-ZZ Pernach, was made in April 9, and in July at 2002 it was presented at an international exhibition in Moscow. 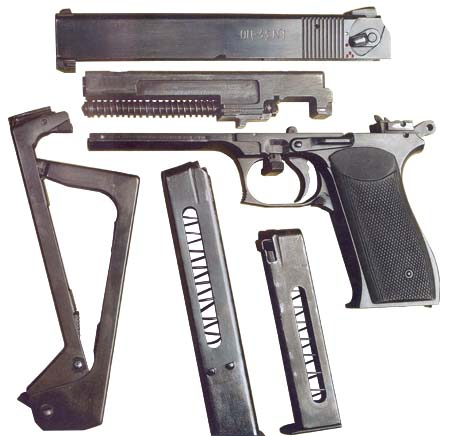 Pernach inherited from Dart an original scheme of automation: to reduce the impact of recoil on the accuracy of automatic firing (with a free-slide scheme), both pistols have a moving barrel. In the OTs-ZZ, after a shot, the shutter rolls back to 70 mm and hits a massive spring-loaded barrel, with which it continues moving on to 5 mm. Due to the shock attachment of the mass of the barrel to the mass of the gate, the speed of the latter is significantly reduced. Upon reaching the extreme rear position, the barrel and bolt under the influence of their springs begin to move forward. Through 5, the mm barrel stops, and the bolt continues to move and sends the next cartridge from the two-row magazine to the chamber.

If to compare - both pistols have a double-action firing mechanism. The included safety lock reliably blocks the hammer, the bolt, the trigger and the trigger, ensuring complete safety when handling a loaded gun, and the fuse can be turned on when the trigger is lowered and when the trigger is cocked. By the way, the fuse also performs the function of a fire interpreter. For shooting from both hands, the safety catch and the magazine latch are made symmetrically. The index of the presence of the cartridge in the chamber is visible visually and to the touch. The rear sight and front sight are fitted with inserts to facilitate aiming at dusk.

To reduce the "toss" when shooting "Pernach" has a gas compensator. With the passage of a bullet in the barrel bore, the powder gases enter the cavity of the bolt-casing and are reflected upwards. However, this simple and effective device has drawbacks: it not only led to an increase in the length of the gun, but also makes it difficult to shoot from positions where the weapon is located close to the shooter, for example, when shooting from the hip. In addition, when injected into the cavity of the compensator of any object, say, a spent cartridge case, there is a delay.

But with all the external similarity, "Pernach" is qualitatively different from the "Dart", and not only in caliber. The cartridge caliber 9 mm with a higher stopping effect of the bullet allowed to abandon the concept of accumulation of damage due to the rapid triple hitting the target. At the OTs-ZZ there is no mechanism for cutting off a queue of three shots, and the rate of fire is reduced from 1800 to 850 shots per minute. To increase stability when shooting, the more powerful Pernach received a removable butt (the OTN-23 had no stock butt in the TTZ), but because of its short length, this butt is suitable, except for dwarfs. If necessary, a laser pointer and a device for silent and flameless can be installed on the gun.

We are in Yandex Zen
Brief history of pistol-carbines. Part of 5. Stechkin automatic pistol (APS)
Small-sized automata (Article I): MA Dragunova, AO-46 Tkacheva, TKB-0116 Stechkina
6 comments
Information
Dear reader, to leave comments on the publication, you must to register.