Russia is predicting a military, economic and political battle for Cyprus 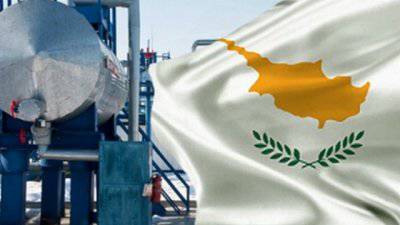 After a large-scale gas field was discovered on the Cyprus shelf by the American company Noble Energy at the end of last year, problems between official Nicosia and the authorities of the partially recognized Turkish Republic of Northern Cyprus have heated up to the limit. For obvious reasons, official Cyprus believes that about 200 billion cubic meters of gas, located in the depths of the shelf, belong to it, therefore Cypriots are going to manage their unexpected wealth. Nicosia is not going to recognize the independence of Northern Cyprus, as well as its claims on blue fuel.


The gas field is really impressive. If you translate its contents into monetary units, it is almost 80 billion dollars, which in turn exceeds the GDP of the Republic of Cyprus exactly three times. The development of such a gas field can cover all the debts of Cypriots, which they managed to accumulate in recent years. In addition to the fact that there is gas on the Cyprus shelf, experts do not exclude that in the near future an oil field can also be found in the same region of the Mediterranean Sea. If so, then Cyprus is quite capable of becoming one of the largest exporters of hydrocarbon raw materials in southern Europe. But things are not as simple as they might seem.

Firstly, as already noted, problems immediately arose with the development, as Northern Cyprus, with the active support of Turkey, stated that without any consent of its authorities, there could be no development. You can imagine the reaction of Northern Cyprus, because all the proceeds from the sale of gas can pass by it. In this regard, the Turkish Republic of Northern Cyprus will try to prevent Nicosia from starting the development of a gas field on the shelf. One of the reasons for this is the unresolved territorial dispute, the second reason is the classical reproaches of the possible damage to the ecosystem of the region after the start of development on the shelf.

Secondly, the problem also lies in the fact who Nicosia will entrust to work on the extraction of gas. American, Israeli and Russian companies are among the applicants for mining. The Americans say that Nicosia should provide them with this opportunity, because it was thanks to the efforts of Noble Energy that gas reserves were discovered. The Israelis say that cooperation with them is economically feasible, since Israel is just closer, so it can start producing blue fuel in the shortest possible time. Russia, on the other hand, presented its rivals with a trump card that can fundamentally solve the situation in favor of Gazprom. This trump card represents the allocation of Cyprus 2,5 billions of euros in assistance to overcome the financial crisis. While Israelis and Americans are convincing Nicosia with the help of their arguments, Nicosia has already managed to receive the first tranche from Russia in the amount of almost 600 million euros. It is reported that such a loan from Moscow is provided at a very benign interest. That is why Gazprom has the right to expect that the contract will be concluded with him, and not with competitors from Israel and the United States.

By the way, financial assistance to Cyprus has caused really heavy disputes among Russian economists. It was also fueling the fact that, for the first time in the last 11 years, expenses in January for 2012 exceeded revenues. Specialists managed to tie it up not only with a multiple increase in the monetary allowance of servicemen in Russia, but also with the very preferential loan to the Republic of Cyprus. Someone managed to announce that the Russian authorities made a completely thoughtless move, helping Europe in its struggle with the crisis. However, as it turned out, economic assistance to Cyprus, which, by the way, is financially closely connected with Greece in distress, can allow it to breathe life-giving power into the economy of the island. In addition, Cyprus can receive the status of the gas power. Naturally, Gazprom also expects to increase serious dividends from its activities on the shelf near the island.

However, here a few more problems emerge, which cannot be said about. To begin with, consider the situation when Cyprus will indeed become one of the gas exporting countries. In this case, if we consider the long-term perspective, Russia can already be in a rather unpleasant situation. Why should Southern Europe buy Russian gas when, one can say, the very same 80 billion cubic meters of gas from Cyprus are under her hand. Whatever one may say, Russia will either have to lower the selling prices for its gas, or accept the appearance of a competitor, which it is trying to grow. Another thing is if Gazprom gets a controlling stake over a field on the Cyprus shelf, and then Russia will acquire the right to control the flow of blue fuel from the island of Cyprus to Europe. The prospect is certainly tempting for the same Gazprom, but ... Will the West allow itself to miss the real chance to diversify the supply of hydrocarbons from Russia. The probability is close to zero.

In this regard, on the site there is another very powerful regional player who can confuse all the cards both to the West and Russia. This is Turkey. For Ankara, in general, any positive situation with the development of a gas field on the Cyprus shelf means its own defeat. Firstly, Northern Cyprus will finally turn into Nicosia’s poor and unrecognized neighbor. The flow of emigrants from the TRNC to the territory of the Republic of Cyprus will obviously increase due to the emergence of additional jobs and the inflow of investments. Secondly, Turkey cannot allow Israel or Russia to take away such a tidbit as offshore gas from under its nose. Today, Turkey’s fears have resulted in Erdogan’s decision to strengthen the grouping of warships in the Mediterranean and Aegean seas. The Turks even came up with a name for their plan, which, frankly, confuses hearing and causes unhealthy associations - the “Barbarossa Plan”. This military action was named after the Ottoman Admiral Barbarossa II, who, rather, can be called a pirate. The speaking title fully describes the contours of Turkish claims. In fact, without having any legal basis for participation in the development of a gas field on the Cyprus shelf, Erdogan is going to prevent others from starting development in this region.

Hotheads are already predicting a possible war for Cyprus gas between Israel, Russia and Turkey, and the war itself is quite real. However, the appearance of another hotbed of tension, and even on the territory of the European Union, seems rather vague. But the manifestations of economic confrontations and political "hairpins" can be expected in the near future. The indisputable fact is that Russia will really have to fight for Cyprus, because several tens of thousands of Russian-speaking people live on the island, here the Russian business has big interests (besides the gas companies), and Cyprus has long become an offshore paradise for Russian oligarchs. Therefore, the battle for Cyprus of political and financial titans, in which ordinary Russians will become only outside observers, can be viewed as a plot that will be demonstrated in a short time.

Ctrl Enter
Noticed a mistake Highlight text and press. Ctrl + Enter
We are
Turkey and Greece. Cold War airspaceIsrael and Turkey are learning to be friends against each other
37 comments
Information
Dear reader, to leave comments on the publication, you must to register.