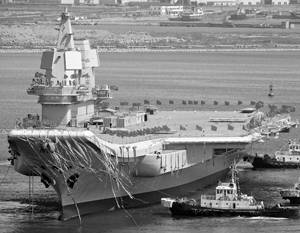 Already the second aircraft carrier was launched into the People's Republic of China, and this is again a ship built in the image and likeness of aircraft-carrying cruisers of Soviet projects. And although the ship will enter the structure of the Chinese Navy only in a few years, it can already be assumed now that it will differ from both Russian and American counterparts.


New aircraft carrier fleet China was launched in the port of Dalian. The ship is planned to be adopted in 2020 - the next three years it will be completed and tested. In total, in the coming years, China plans to bring the number of aircraft carriers to five. The second Chinese aircraft carrier is the first ship of this class built in the PRC itself.

The first Chinese aircraft carrier "Liaonin", in the past - the Soviet heavy aircraft carrier "Varyag", laid down in 1985 at the shipyard in Nikolaev. When the Black Sea Fleet was divided, the ship departed to Ukraine, and in 1998 the year was sold to a Chinese company (as it was then reported, to organize a floating amusement park and a casino).
Now, a repaired and re-equipped aircraft carrier is the flagship of the fleet of the People’s Liberation Army of China, who recently took part in a demonstration of the power of the PRC Navy near the disputed islands of the South China Sea.

Modeled on the modernized "Varyag"

“Roughly speaking, the new, second aircraft carrier is the Chinese version of our heavy aircraft-carrying cruiser 11436 project, which“ in girlhood ”was“ Varyag ”, said Andrei Frolov, a researcher at the Center for Analysis of Strategies and Technologies, in his commentary to VZGLYAD.

During the construction of the new ship, the Chinese reconstructed the construction of the heavy aircraft carrier Varyag, but using their own materials, the expert explained. “Completely their body. The superstructure was slightly modified, with another radar station, ”Frolov said. Electronic equipment, landing equipment, power plant - all Chinese. 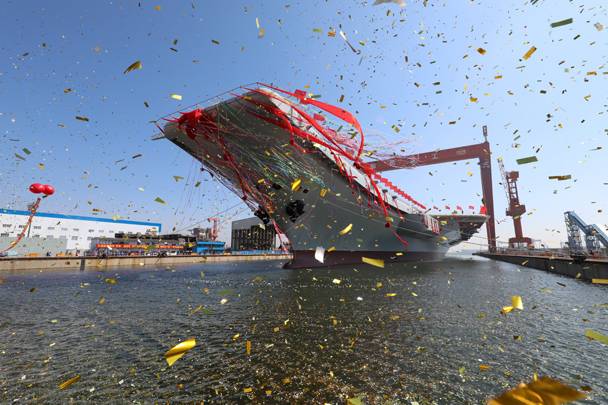 According to the expert, "the ship is more successfully assembled, unlike the" Varyag ", which the Chinese have altered a little." In particular, the Chinese removed from the Varyag - Liaoning built-in complex of anti-ship missiles "Granit". "Any alteration is still worse than something that was originally designed," - said Frolov.

"According to the number of aircraft that the new ship can carry on board, it is comparable to Liaoning, there can be no sensation here," the expert added.

In particular, the new ship has no fundamental differences in the air defense system with Liaoning, said Konstantin Sivkov, the first vice-president of the Academy of Geopolitical Problems, told the VIEW newspaper to the newspaper.

Thus, it can be said that China continued and developed technologies and ideas for the construction of aircraft carriers, developed more than forty years ago by the Soviet Union.

However, if the current aircraft carrier with the “speaking” name of the 001A project is modeled on the Varyag, then the next ship of this type is being built by China in a completely new, independent project. Earlier it was reported that the third aircraft carrier can be equipped with a nuclear power plant and several steam catapults.
In comparison with the "Admiral Kuznetsov"

The potential of the second Chinese aircraft carrier will be higher than that of Admiral Kuznetsov, Frolov said. “Due to the fact that this is a new ship, it will not suffer from the constructive and production flaws that are on the Kuznetsov,” Frolov said. - As I have already said, Admiral Kuznetsov has an integrated anti-ship missile complex. Experts are still wondering whether this complex will be dismantled during the modernization and repair of the ship. ”

Recently there was information that instead of the old "Granites" are going to put new missile systems, said Frolov. “Apparently, the Ministry of Defense is not abandoning the concept of a universal ship, which can both use missiles and take planes,” Frolov said. “If this is so, then the features of Admiral Kuznetsov, in comparison with all aircraft carriers that exist in other countries, will consist of this.”

You can immediately point out the problems of the Chinese ship and our "Admiral Kuznetsov" - this is the absence of the elements of the radar patrol, so the air defense capabilities are very limited, said, in turn, Konstantin Sivkov. If the Russian ship has a X-NUMX helicopter K-4 of the radar patrol and this largely resolves the issue of the warning detection of an air enemy, China does not have full-fledged helicopter patrols of the radar patrol.

In addition, our aircraft carrier also has more advanced hydroacoustics, it has its own hydroacoustic station, Sivkov notes.

The US Navy Pacific Fleet has 6 aircraft carriers. These are the Nimitz and five ships of a similar class: the Carl Vinson (the flagship of the shock group that maneuvered off the coast of Korea), the John Stennis, the George Washington, the Abraham Lincoln and the Ronald Reagan. The 5 of 6 aircraft carriers, including the Carl Vinson, are part of the 3 fleet covering the Pacific coast. One - “George Washington” - is part of the 7 fleet, based in Japan.

The balance of power in the Pacific

“The Chinese fleet is the second after the American, in some aspects it is comparable to the Japanese and surpasses all other fleets,” says military expert Andrei Frolov. According to him, the PRC fleet is superior to the Russian Pacific Fleet, "perhaps with the exception of the submarine component." “We have more nuclear submarines there, and their qualitative characteristics exceed those of the Chinese. But many submarines are under repair now, ”the expert notes.
The United States obviously has a clear concern about the growing Chinese presence in the Pacific. Signs of this can be seen from the beginning of last year, reports of the Pentagon’s desire to revise the Fleet Structure Regulations (FSA). The draft revised FSA suggested an increase in the number of naval ships from 308 to 355 units. The same point - to increase the number of ships to 350 - was contained in the election program of Donald Trump. According to experts, one of the main reasons for plans to increase the fleet is the need for proactive maneuver in confrontation with China.

“But since the Chinese aircraft carrier will continue to finish building and it will be operational only by 2020, the balance of forces in the Pacific region still does not change,” said Vasily Kashin, an expert at the Center for Analysis of Strategies and Technologies. But in the long term, China, having increased the number of warships, expects to "solve more diverse tasks in the western Pacific seas adjacent to China and increase the possibilities for successful operations against Taiwan in the South China Sea," the expert emphasized.

The Chinese ships, in comparison with the US, have fewer capabilities, the interlocutor agreed, but they are intended for other tasks. “They will not be used throughout the world, it’s more for operations in the seas adjacent to China,” Kashin said.