War by invitation. Will Russia start a land operation in Syria?

April 27 2017
101
The newspaper Al-Quds Al-Arabi (an Arabic edition with a London residence permit) writes that the Russian authorities can send ground troops to Syria. It is necessary only to ask Assad how Russian special forces will immediately appear in areas of concern to the Syrian army. 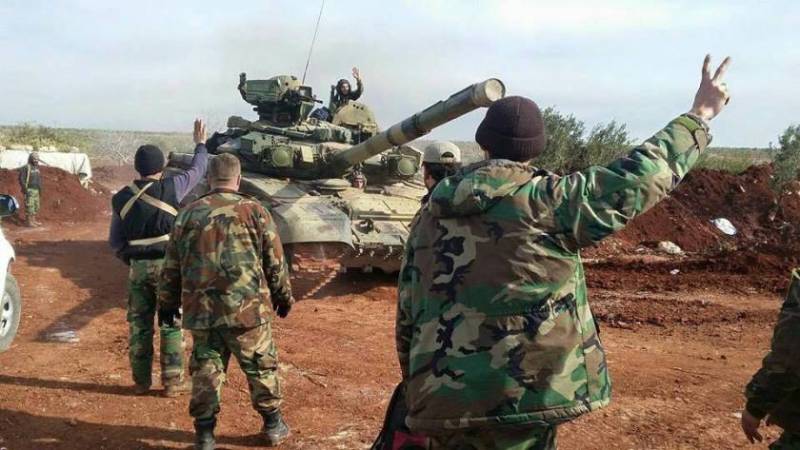 Arab newspaper Al-Quds Al-Arabi, published in London, reported that Moscow could send ground troops to Syria to help Assad. The information was received with reference to sources in Syria.

According to unconfirmed reports, if President Assad formally asks for help from Vladimir Putin, Moscow may send ground troops to Syria. In this case, the Russian special forces may appear in those areas where the Syrian army is experiencing difficulties in the fight against "rebels".

The Kremlin does not comment on this anonymous "information".

About this, Russian President Vladimir Putin told at a meeting of the Military-Industrial Commission, reports TASS. According to the head of state, the increase in the volume of export contracts for weapons is due, among other things, to the effective use of Russian weapons in the course of the antiterrorist operation in Syria.

“This is due to the effective use of our weapons in real combat conditions, including in the antiterrorist operation in Syria,” the president’s agency quotes. He believes that "we should not miss this opportunity in order to strengthen our position in the global arms market."

According to Putin, defense companies are almost completely loaded with orders from the Ministry of Defense, and additional supplies of weapons should be further worked out: “For the production of certain types of ground weapons, the defense organizations are almost fully loaded with the tasks of the Ministry of Defense, respectively, to ensure that the required military-technical cooperation it's getting harder. I ask you to further elaborate measures for the fulfillment of export supplies of general-purpose armaments. ”

The leader of Russia noted that if Russia today refuses foreign orders, it may miss out on promising partners in the future.

V. Putin’s mention of the effective use of Russian weapons "in real combat conditions", including in Syria, we note, leads to some reflections. On the other hand, the arms trade and the demonstration of its action is one thing, and the land operation is another.

Moreover, Russian experts do not believe that the Kremlin intends to launch a large-scale ground operation in Syria. Basically, not Assad is fighting for Moscow, but Tehran.

President of the Academy of Real Politics, expert of the Academy of Military Sciences Vladimir Prokhvatilov on the website argumentiru.com notes that B. Asad greatly simplifies the situation, allowing the possibility of turning to Russia for help. Russian ichthamnets, the analyst believes, "are already present in Syria already."

In his opinion, the expansion of the ground contingent of the Russian Federation to two or three divisions (and a smaller number will not be enough for a radical change in the course of military operations) will require a corresponding expansion of the capabilities of the “Syrian express train”, and such is hardly achievable.

“In addition,” the author writes further, “Bashar al-Assad, as it seems to me, is simply cunning, waiting for the advent of the" huge army of terrorists. " In fact, in the medium term, an invasion army from the forces of the pro-American coalition can enter Syria. Now Turkey has begun to form another anti-Assad group in the north of Aleppo province. In the south, the Americans are pulling their special forces and armored vehicles to the Syrian border, which will accompany the Jordanian tank army ... "

Also, this expert believes that only Iran supports the truly firm Assad, while Russia is fighting mainly for the preservation of military bases in Hmeimim, Latakia and Tartus. They are needed for the projection of military force in the control of strategic pipelines (both existing and projected).

Interestingly, a few days ago, Bashar Asad did not consider that Syria has a need for support by ground forces.

"In fact, the Russian Aerospace Forces have been very effective and efficient over the past year and a half, a little more, in supporting the Syrian army, and everyone knows that since this support began in 2015, the balance has changed and we have been able return Palmyra, and Aleppo, and many other areas, and we were able to defend Ham recently, it was a huge and well-organized attack, but we were able to repel it, - he said in an interview RIA News". “Therefore, this support was very effective, and, of course, we must not forget the effective support on the ground of the Iranians, they did not send troops, but with their officers, with their advisers, they played a very important role. Therefore, I do not think that now there is a need for ground forces. Sometimes, when intense attacks are taking place on different fronts, as you mentioned, north, east, south, and in the middle, (since — Ed.) Russian missiles attack from the sea. Russian strategic bombers from the territory of Russia attacked (objects of terrorists. - Ed.) In Syria. So, military support, Russian military support is not limited to their base in Syria. In fact, they are aware of the need for fighting, the situation is constantly changing, but the troops on the ground up to this point are not needed. Maybe in the future, if our enemies and their supporters, their terrorists, their henchmen, change their strategy and bring more terrorists from all over the world and there will be full armies of terrorists by this moment, it may be necessary, but at this moment I will not I consider it necessary. What was done is good and sufficient. ”

According to Alexander Shumilin, director of the Center for Analysis of Middle East Conflicts at the Institute of the USA and Canada, whose opinion leads Utro.ru, the official introduction of Russian troops into Syria is unlikely, since in this case you will have to “enter the clinch” with the United States and Europe. And the Kremlin has no reason to worsen the already cool relations with Washington.

As for the United States in Syria, then the Americans (with whom, in the event of which, they will have to “enter the clinch”) cannot win this war.

This point of view was voiced by journal observers. "National Interest"recently returned from Syria.

In their opinion, Washington’s policy toward Syria has been a “failure” for the past six years. It is time for Washington to use the new strategy.

Also, journalists believe that this conflict can not be resolved on some "external" conditions: the Syrians must fight themselves and conquer their own future. And nothing else, because "the Syrian civil war ... is like the heads of the Lernean hydra, fighting each other."

There are also “external” players: Qatar, Kuwait, Saudi Arabia, Turkey, the United States — with their conflicting interests in the region — are participating in the Syrian war in one way or another.

Conclusion: military force from the outside will not help. The solution to the problem can only be found within the country.

Second conclusion: Washington should recognize that a change of government in Syria is a losing strategy, and it "does not work." Her time to "throw out."

Thus, the land operation of the Russian Federation in Syria is hardly possible for a number of reasons. First, Bashar Asad himself does not believe that such an operation is now appropriate. Secondly, there is a great risk of facing the troops of the western coalition led by the United States. Third, Moscow prefers to supply and demonstrate effective weapons, rather than arrange a “second Afghanistan” for itself.