Syria as the second Afghanistan for Russia: is it so?

April 14 2017
85
President Barack Obama, who did not want to drag his home country into the Syrian war, warned Russia at the time: a protracted conflict in the Middle East could be the second Afghanistan for Moscow. Russia will get bogged down in this war. To lead a long war Russian simply can not afford. In addition, due to actions in Syria, the risk of a terrorist threat to the Russian Federation increases. Some experts believe that Obama's predictions are moving into the category of prophecies. 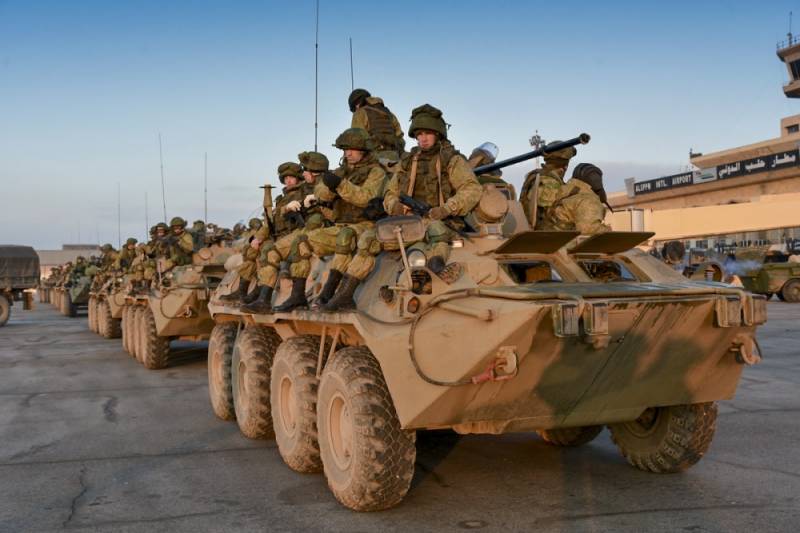 In the headquarters of the operation "Enduring determination" officially told the Russian newspaper "News" about their readiness for security measures to protect the American military in Syria.

An American commentary on a statement by the Russian defense department notes that coalition forces, when planning Syrian operations, do not focus on the possibility of opposition from the Russian Federation and, at the same time, are ready for force protection of their personnel. Moscow's withdrawal from the agreement on the prevention of air incidents will not interfere with actions aviation coalitions. Blows will be carried out throughout Syria, in all places where the allied forces will require air support.

The response to the “Izvestia” request states the following:

The coalition continues to provide air support to partner forces in Iraq and Syria. The level and number of attacks depend on the operational needs and the availability of targets.

Under the "power protection", explains the publication, in the US Army usually understand the complex of force decisions aimed at protecting troops from the actions of the enemy. This may include preemptive strikes against threatened objects, raids and fear actions.

As for any reaction of Russia, foreign experts do not think that Moscow will take any kind of "military measures", and therefore the Americans may hit the Assad bases again.

The American expert on the Middle East, retired Major General Paul Vallely, who advised the command of special operations and other structures of the Pentagon, told Izvestia:

I do not think that Russia will take any military measures. I do not rule out new strikes on the Assad air force using the above bases.

As the doctor of political sciences Alexander Ivanovich Shumilin believes, Syria is becoming a burden for Russia.

“What is common between the US missile attack on Shairat airbase and an explosion in the St. Petersburg metro? - such a question is asked by the scientist on the pages "Independent newspaper". And he answers: “The answer, most likely, is this: Russia's intervention in the Syrian conflict, under whatever pretext it happens, is becoming more and more dangerous and burdensome for Russia itself.”

“Of course,” he continues, “here and now it is appropriate to recall the prophecies of Barack Obama (and not only him) that Russia's intervention in Syria on the side of Bashar al-Assad will surely turn into an increase in the terrorist threat to the Russians. In Moscow, these words were made to laugh. But it was no time for jokes after the explosion of a civilian liner over Sinai in October 2015. At that time, the rulers of the Islamic State (IG), banned in Russia, were openly proud of this atrocity. ”

Further, the expert recalls the recent terrorist attack in the St. Petersburg metro, where, probably, a trace of Islamists linked to the Central Asian and North Caucasian underground is visible. True, none of the likely relevant groups have yet taken responsibility. However, the "IG" does not put a signature under the committed atrocity. “This may mean an increase in intraspecific rivalry: the IG brand seems to have passed the peak of its popularity and is already losing its appeal as the Caliphate loses the territories it controlled. Instead, regional groups can increase influence, weight and independence, ”the expert concludes. In his opinion, the main breeding ground for the cultivation of radical Islamist sentiments is happening in Syria.

Russia is disappointed with the formal, “protocol expression of condolence” that comes from the West. And then there is the US missile strikes on Syria: they say, "Russia, please step aside, free up a platform for strikes." And this is after the gigantic investments of the Russian Federation in supporting the “legitimate president” of Syria, reminds Shumilin. Frustration can be attributed to the “world Russophobia”, as the organizers of political shows on federal TV channels “are trying to do,” but this trait is “false,” the expert believes. With blows at the Syrian air base, Trump was solving his tasks, but he also extended his hand to Moscow “in the fight against terrorism in general,” he believes. Like the Obama administration, the Trump team believes that the tasks of fighting terrorism in Syria are not very compatible with the support of the Assad regime.

Last Sunday, Turkish Foreign Minister Mevlüt авavuşoлуlu said that Russia and the United States are “competing” in Syria in support of the Kurdish National Self-Defense Detachment (YPG). He writes about it Mixednews.ru with reference to the site kurdistan24.net.

The statements of авavuşo отмечlu, it is noted in the publication, sound like a reproach both to Russia and the USA. Ankara is unhappy with the cooperation of these countries with the Kurdish organization, which is recognized as terrorist in Turkey. “Rivalry for a terrorist organization is unacceptable. This is unprofessional, ”Cavusoglu said.

At the recent G-7 Ministerial Summit in Lucca (Italy), US Secretary of State Rex Tillerson made clear to the audience: Assad figures in the future of Syria are not visible. Russia will have to either take the side of the United States, or be on a par with the said Assad, Iran and Hezbollah. In essence, the state secretary outlined a "rogue" circle.

Later, Tillerson’s visit to Moscow, which in the USA was called an “ice meeting,” confirmed the Kremlin’s fears: the Trump administration took an unbending stance on the Syrian president. Tillerson does not allow the preservation of Assad in power. In the government of Syria, the role of Assad is "not envisaged," he said.

If Mr. Obama has diligently avoided the confrontation of the United States and the Russian Federation in Syria, then the Trump team goes the opposite way. To understand this is not surprising: Mr. Trump decided to revive the former power of his native America through the military-industrial complex. And there, where the military industrial complex swells like a yeast, new enemies and new wars are immediately required. Somewhere fit and hot war, but somewhere - cold. Ronald Reagan would be pleased with his correspondence student.