April 12 2017
59
Informational portal "Word and deed" with reference to the publication in the social networks of representatives of the Armed Forces of Ukraine reports about the next "drunk" incident as part of the Armed Forces of Ukraine. The submission says that a group of Ukrainian servicemen, after a fair bitter libation, ignored the orders of the command and attempted to use firearms against one of the officers. weapon.


In order to restore order in the unit entrusted to him, the Ukrainian officer took out a pistol and fired several shots into the air, but this caused even greater rage among drunken subordinates. Ultimately, an officer shot at the legs of the most violent soldier who was wounded and was sent to the hospital in Artyomovsk (Ukrainian - Bakhmut). Doctors ascertained the high blood alcohol content of the wounded - 1,29 ppm. 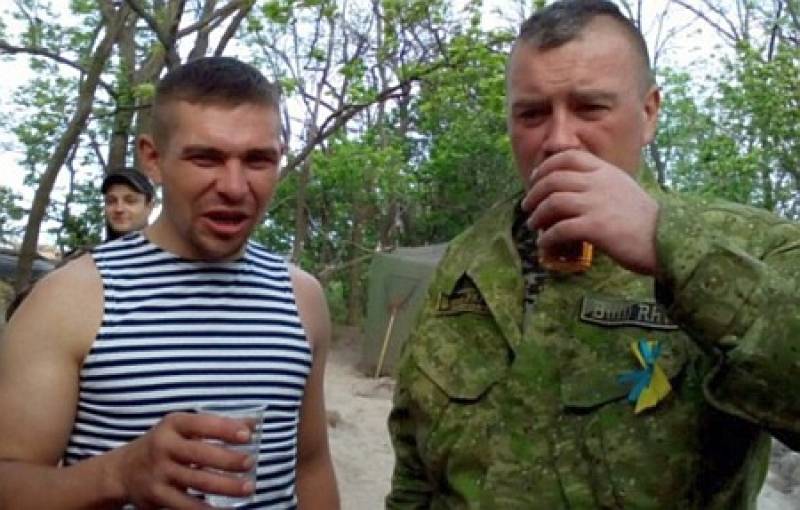 Against this background, messages come in with details about the revolt of the Ukrainian security forces at one of the landfills near the town of Chuguev, Kharkiv region, where the 54 Brigade is stationed. It turned out that the conflict arose due to the fact that the flags of the Right Sector (banned in the Russian Federation) were hung out on some tents, and Major-General Alexander Krasnokok, chief of staff of the Vostok operational command of the Armed Forces of Ukraine, ordered to remove the black-and-red flags of Pravosek. About it on the page in Facebook said Yuri Masyagin, who calls himself a volunteer, who criticized the order of the general:
He looked, looked, and gave the order: remove all red and black flags from the tents. Clever, of course, order. You will tell nothing. And the fact that part of the infantry in the brigade came from the volunteer battalions, he, of course, forgot to think.

Some Ukrainian military from among all the same pravosekov announced that they refuse to carry out any orders of command, until he cancels the decision on the need to remove the black and red flags from the tents. Several pravosekov frankly "sent" a Ukrainian general.

This situation leads to the fact that Ukrainian commanders are beginning to think about the confidence of their subordinates. In fact, each commander understands that the radicals from his unit in the case of "not liked" the order at best can ignore it, and at worst - and put a bullet in the forehead.

On the air of Ukrainian TV during the talk show “HARD with Vlaschenko” on TC ZIK, the former head of ATO headquarters, Viktor Nazarov, notes the following trend:
We can already speak about such a phenomenon as “General Nazarov syndrome”, when commanders of different levels, and we are not talking only about officers and generals, it can even be a squad leader who, every time he receives tasks from a higher leadership, will think : "Is it appropriate to do this?". And he will have doubts, and the commander, who doubts, has no chance of success.

Recall that Nazarov less than a month ago was convicted in Ukraine of official negligence and sentenced to 7 years in prison.