Checker: one blow on the spot

April 11 2017
193
History cold weapons Today there is no shortage of authors and materials. And nevertheless, there are also “white spots” in the shadow of blades.

For example, such a “childish” question is often asked: “Why does a saber have protection for a hand, but a saber doesn’t?” Not to mention the reasoning about which is better - a saber, saber or a katana samurai sword? In the spirit of "Who is stronger - a lion or a tiger?". The last question is not difficult to answer - it all depends on the art of the owner of a weapon. But here about the lack of a protective guard on the checker, even authoritative experts do not give a definite answer.

The sword is a slashing-piercing weapon with a single-blade blade of slight curvature. It was used mainly for inflicting chopping blows, but with a certain degree of dexterity, it could also prick. Despite the apparent simplicity, difficulties arise even with the definition of immediate relatives checkers. At first glance it may seem obvious that it is descended from a saber. The saber appears in the armament of the steppe warriors of Eurasia around the VII century and was used primarily as a weapon of equestrian combat. But various types of curved swords have been known in our region since antiquity. The same Thracians willingly applied curved swords on a long arm and on foot. In appearance, the saber differs from the saber only in the shape of the blade and the handle - the later saber blades are more curved, their hilt has a crosshair or more powerful protection up to the "cups". 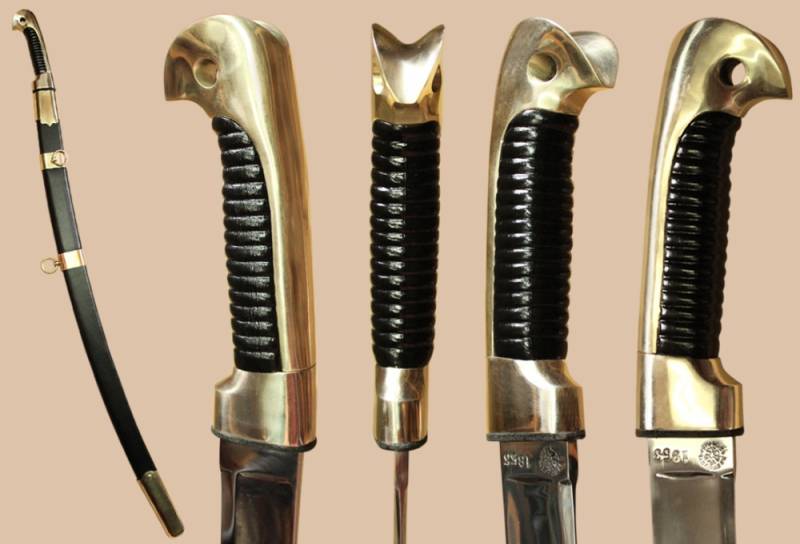 At the same time, the first sabers discovered in our region by archeologists and dating back to the 9th-10th centuries, as a rule, have a small degree of bending and a poorly developed diamond-shaped guard. And this looks somewhat similar to the later checkers. These blades are well known for drawing one of the first Soviet researchers of the armament of ancient Russia Anatoly Kirpichnikov. Over the next century, the sabers have made a significant evolution. As defense armaments become stronger, saber blades gain greater mass and curvature. In the version of the Turkish kylycha, her blade received a thickening- “elman” at the end for more efficient cutting through the armor. Lighter Persian-type sabers had a very large bend, reinforcing their cutting properties.

Actually checkers are found from the XII-XIII centuries, but as an auxiliary weapon, along with a dagger or a knife. Massive drafts begin to be used only from the XVII-XVIII centuries.

Therefore, there is a hypothesis that the checker does not come from the saber. The direct ancestor of drafts is a big knife, like a machete. The very name of the piece, according to one of the versions, goes back to the Circassian "sasho" - "long knife". Indeed, the shape of the blade and the handle of the checker is closer to the knife samples than to the saber. It would be logical to assume that the sword was a certain hybrid between a large knife and a saber.

Homeland checkers is the North Caucasus. It is widely distributed here to the XVI-XVII centuries. By this time, the development of firearms produces a real revolution in military affairs. Flintlock muskets and artillery begin to dominate the battlefield. The armor is gradually falling out of use, and therefore cold weapons also become lighter. In this direction, for example, the West European sword evolves.

The Circassians, like the neighboring “Cherkasy” - Cossacks, also prefer “fire fighting”. The main fighting force of the mountaineers is still the light irregular cavalry. Only now every soldier seeks to arm himself with a gun or rifle, and a pair of pistols. They fire from their horse, dismounting, attacking, and defending. This is where the need for a saber, which used to be ripped by riders with shields, helmets, chain mail and "mirror" armor, gathering in closed ranks, disappears. In place of the sword-saber comes checker, which previously served as an auxiliary weapon. 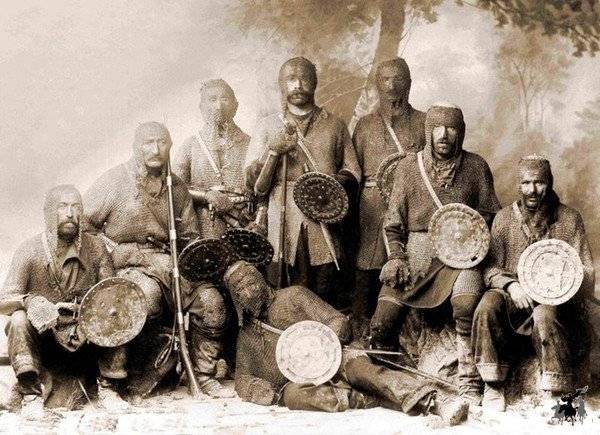 Now, during a horse attack, having frustrated the ranks of the enemy with fire, he is often simply punched in pursuit. If the enemy could not be overthrown by fire immediately, then the counter cavalry battle also begins to have a slightly different character. Due to the use of firearms, attacking in a dense structure became unprofitable. Caucasians and Cossacks attack in loose or open order, lava. Correspondingly, the horsemen approach each other in parallel courses, rush past each other through the formation and often decide the outcome of the collision with one powerful and precise blow ...

For such a strike it was precisely the checker that was best suited. Due to the fact that her arm is deprived of additional elements of protection, the center of gravity of the weapon is somewhat biased forward. Such balancing allows you to deliver stronger and faster blows. Even if the weight of the checker is lighter than that of the saber.

Since the Caucasian warriors of the 17th century did not leave us their memoirs, let us turn to later sources. In his memoirs, Semyon Budyonny, describing the battlefield after a collision of red cavalrymen with white ones, speaks of corpses mutilated by terrible “drafts blows”. According to the established norms of the literary language, they usually speak of "saber strikes", as well as of saber blades, saber attacks, etc. Even if the dashing cavalryman Semyon Mikhailovich could not pay attention to these subtleties, his literary consultants would certainly have noticed. It seems that Marshal of the Secular Union Budyonny purposely wrote precisely about drafts strokes, which would emphasize their special destructive power. Incidentally, Semyon Budyonny himself possessed a monstrous force by the blow of a blade.

In the story "The Duel", Alexander Kuprin, who himself served as an officer in the Russian imperial army, quotes the words of Lieutenant Bek-Agamalov, who easily cuts an emerald scarecrow with army sword, and then reports how they teach felling in the Caucasus:
"- What's this? Is it a cabin? - He said with mock disdain. - My father, in the Caucasus, was sixty years old, and he chopped horses' neck. In half! It is necessary, my children, to constantly exercise. This is how they do it here: put a wicker in a vice and chop it up, or water will be thrown on top of a thin string and chopped. If there are no splashes, then the blow was right. ” Even Bek-Agamalov says that even though he can chop a ram or even a calf, he will not be able to cut a person from shoulder to hip, as his father easily did. “I'll blow my head to hell, I know that, and so that it’s obliquely ... no,” the lieutenant complains. Here he also explains one of the techniques of possession of the sword - a cutting blow with a thrust upon itself, with the connection of the wrist movement. Subsequently, having caused a scandal in a brothel, the rampaging Bek-Agamalov cuts the table with a sword and smashes everything around him. The real prototype of Bek-Agamalov in Kuprin's story was his fellow lieutenant S. Bek-Buzarov.

There are also legends about the drafts of a special shock power - with mercury inside the blade. Rolling from the base of the blade to the tip, liquid metal allegedly gave an additional kinetic impulse to the impact. According to such a beautiful legend, the wife of a militant Khan, offended by his inattention, put a “mercury” saber on the stove. Then the mercury which has expanded from heating from within has broken off a blade. Khan ordered his wife, together with the spoiled miracle weapon, sewn into a leather bag and thrown into the river.

However, documentary or material evidence of the existence of such "inertial" blades is missing.

There is also an opinion that it is impossible to fence with a sword. Indeed, in the case of the blade on the blade, due to the lack of guard, there is a high probability of injury to the hand. But as we have said, when exchanging the strikes of riders on the oncoming traffic, the one who was the first to reach the enemy with a blade won. However, the sword could still be fenced, including in the fights of foot soldiers. 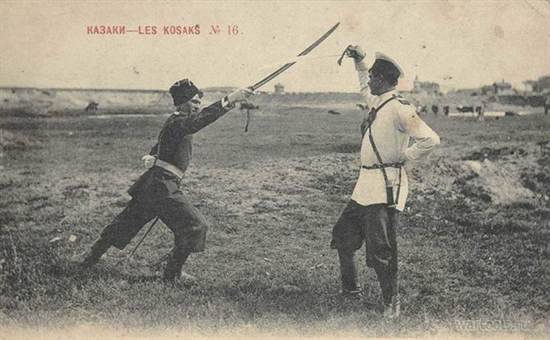 According to old prints and photographs one can understand how it was possible. In addition to the chain mail, a mitten is worn on the right hand of the Caucasian warrior. It is soft, quilted, and the top is still covered with chain mail. A simple, generally, solution.

The checker quickly gained popularity in the Cossack troops of Russia, and in the 1st half of the 1881th century it was officially adopted there. Regular cavalry and infantry and artillery officers were armed with sabers of various designs. In XNUMX, a saber became a universal type of long blade weapon of the Russian army, only some Life Guards cavalry regiments and officers fleet kept sabers and broadswords. Checkers were worn by both police and gendarmes. True, if the Cossacks used a classic checker, then for dragoons and army officers samples were taken that had a protective bow. The versatility and popularity of the checker was given by simplicity in the manufacture and possession of it. 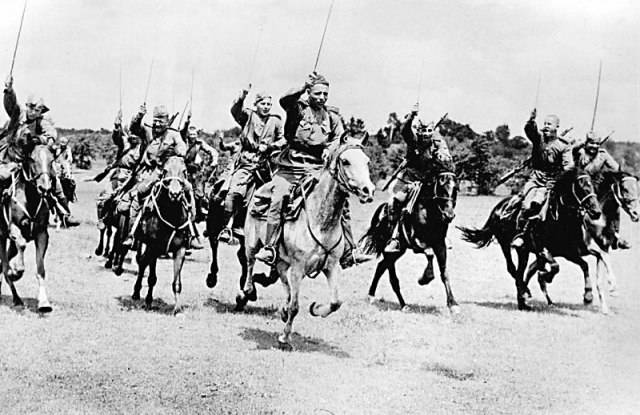 In the cavalry of the Red Army, only a Cossack saber was used as a military weapon. Though not often, but the checker was used on the battlefields of the Great Patriotic War.

Today it is sometimes said that the Cossack saber is like a Japanese katana sword. In fact, both the balancing and the technique of working with samurai weapons are very different from the Caucasian or Cossack drafts. But there is one general principle of the real combat use of these legendary blades - “on the spot with one blow”.