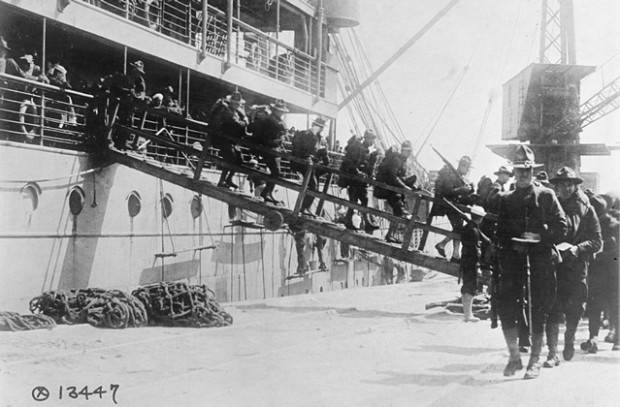 100 years ago, 6 April 1917, the United States declared war on Germany and entered World War I. Before that, they remained neutral. The entry into the war of a power with a powerful economy, with enormous resources, capable of forming and maintaining a large army and navy, not exhausted by many years of struggle, promised to finally create an advantage in favor of the Entente, so it happened. In addition, the US entry into the war allowed the Entente to calmly endure the fact of actual, and then officially, exit from the war of Russia, engulfed in turmoil.


The United States entered the war at an extremely convenient time. Germany and the bloc of the Central Powers were already exhausted by a long war, their troops lost their former strike power. In addition, it took time to transport troops and weapons overseas, that is, the Americans could not actively participate in the most serious battles of the 1917 campaign of the year. American troops entered the battle only in the fall and suffered much less casualties than the main powers of the Entente. At the same time, the United States was able to share the “skin of the German bear” and its allies, dictate its will to weakened allies, creating the American order on the planet. And during the war, even before entering the fighting, the American clans of the "golden elite" (financial international) were fabulously rich. The United States was at the beginning of World War I, the debtor, and during the war became the main world creditor, receiving the main streams of gold from the warring powers.

It is also worth remembering that The First World War is a war of the USA, Great Britain and France against Russia, Germany and Austria-Hungary. Russia was formally an ally of England and France, their "cannon fodder." But in reality, the masters of England and the United States initially planned the war in such a way as to simultaneously solve several global tasks:

1) destabilize, destroy and crush the Great Russia. The masters of the West decided by 1914 for the year that sufficient funds had been accumulated for the final solution of the “Russian question”, all forces were prepared, both outside Russia and within it, taking into account the experience of the Russo-Japanese War and the 1905-1907 Revolution. The masters of the West wanted to destroy Russian civilization as a global competitor who could create an alternative, fairer model of world order. In addition, the West needed the immense territories and resources of Russia to build its world order.

2) destroy the last national aristocratic Aryan empires - Russian, German and Austro-Hungarian, built on similar principles Ottoman empire, which prevented the owners of the West (financial international) to build a new world order - "liberal-democratic", the capitalist world (in fact, global slave civilization). To do this, they poisoned Germany, Austria-Hungary, Russia and France on the continent, so that they would be destroyed by the results of the war and could not oppose the plans of the “masons-architects”. In fact, it was the war of the masters of England and the USA against Europe and Russia for absolute power on the planet, the power to parasitize freely on the body of humanity. The masters of England and the USA were going to destroy the Russian civilization and the superethnos of the Rus - the main and most dangerous rival on the planet, the carrier of the “Russian matrix” - an alternative fair model of the global world order;

3) it was necessary to destroy thoroughly destroy Europe, to deliver a powerful blow to the Anglo-Saxon competitors - the old Roman-German elites. Britain and the United States became the leaders of the Western project, subjugated continental Europe. At the same time, the United States was planning to get ahead and take the place of the “senior partner” in the bond America - Britain.

Thus, the First World War unleashed by England and the United States was based on a scenario prepared in advance in London and Washington (New York City). The masters of the West carried out their plan - by 1917, Germany, Austria-Hungary, Turkey, France and Russia were drained of blood. The most powerful competitors of the Anglo-Saxons - Germany and Russia, destroyed each other in a mutual slaughter. Russia in February-March, 1917, collapsed in turmoil, the Russian autocracy, greatly interfering with the Western masons, fell. Financial International based in England and the United States reassigned Eurasian banking clan houses. Financial, gold flows, plus refugees - labor and engineering, intellectual personnel (for example, Igor Sikorsky - the creator of the helicopter, Vladimir Zvorykin - became one of the inventors of modern television) rushed to the United States, turning America into a global creditor and industrial, technological center of the planet. National power in Germany, Austria-Hungary and Turkey was on the eve of the collapse, and these territories could soon be thoroughly robbed and subjugated to London and Washington. Preparing a revolution in Germany. Therefore, Washington decided it was time to go to war. There is practically no chance of much overthrowing from Germany, the victory is close, soon it will be time to divide the skins of the vanquished.

American troops have fought since October 1917 on the Western Front and since July 1918 on the Italian Front. During the war, more than 4 million people were called up for military service. The USA lost more than 117 thousand people in the First World War.

The United States closely followed the course of the war, well enriched in the supply of the Entente and partly Germany. However, in general, material and financial support was in favor of the Entente. By 1917, the US hosts decided it was time. At first, neutral tendencies prevailed in public opinion. They say it is not our war, the business of Europeans. But then gradually public opinion was skillfully handled in the anti-German way. Especially used underwater war, which led Germany.

So, especially the great noise caused the death of a huge steamer "Lusitania" in May 1915. The ocean liner was torpedoed by a German submarine. Killed more than a thousand people, including more than a hundred Americans. This attack, possibly provoked and prepared by the British special services with the aim of demonizing Germany and processing the American public opinion in the right direction, had serious consequences. The general opinion of Americans was expressed by former US President Theodore Roosevelt, who compared the actions of the German fleet with “piracy superior to any murder ever committed in the old pirate era” and called for action in the name of maintaining national dignity. A propaganda campaign was launched in Great Britain and the United States on the barbarism of German submariners and the German people as a whole.

Therefore, at the beginning of 1917, anti-German sentiment in American society already prevailed. And when Germany at the end of January 1917 resumed an unlimited submarine war, the corresponding sentiments in the United States were already prepared. It is not surprising that when the German Prime Minister Theobald von Betman-Golweg found out about this decision, he declared: “With Germany it is now over,” anticipating the imminent imminent entry into the US war. The US government has repeatedly warned Germany that it will regard attacks on its ships as an act of aggression. February 3 from Berlin was recalled by the American ambassador Gerard. On the same day, US President Woodrow Wilson asked the Senate for "permission to use all means that may be necessary to protect American ships and citizens in their peaceful activities."

Soon the United States received another reason to join the war. On January 16, German Foreign Minister Arthur Zimmerman sent an encrypted telegram to the German Ambassador to Mexico, Heinrich Eckhard. It said: “We [Germany] intend to start a merciless submarine war with February 1. In spite of everything, we will try to keep the United States in a state of neutrality. However, in the event of failure, we will offer Mexico: to wage war together and to make peace together. For our part, we will provide Mexico with financial assistance and assure that at the end of the war she will receive back the territories of Texas, New Mexico and Arizona that she lost. We entrust you to work out the details of this agreement. You will immediately and top-secretly warn President [Mexico] Carranza as soon as the declaration of war between us and the United States becomes a fait accompli. Add that the president of Mexico can, on his own initiative, inform the Japanese ambassador that it would be very beneficial for Japan to join our union immediately. Pay the president’s attention to the fact that we will continue to make full use of our submarine forces, which will force England to sign the world in the coming months. ”

Thus, Germany offered to conclude an alliance with Mexico, promising it in case of victory the southern territories of the United States. The British intercepted decrypted this telegram, its text was transmitted to the representatives of the United States, which became the official reason for declaring war on Germany. As the British historian Neil Grant noted: "Zimmerman's telegram provided evidence of Germany’s hostility towards the United States, which, as President Wilson often repeated, was necessary for him to make a decision to declare war."

1 March The text of a hostile US telegram was published in American newspapers. On the same day, the US Congress made a decision on the arming of merchant ships to counter the "unlimited submarine war", which Germany announced. US President Woodrow Wilson raised before Congress the issue of declaring war on Germany on 2 in April and on April 6 received agreement. Wilson concluded his appeal to Congress with the following words: “Staying neutral is no longer possible when the world’s world and the freedom of the world are at stake. So, we are forced to take the fight with the natural enemy of peace and freedom. We will sacrifice for this our life, our condition, all that we have, in the proud consciousness that the day has finally come when America can shed its blood for the noble principles from which it originated. ”

That is, the owners of the United States once again covered their criminal and predatory goals "in battle with the natural enemy of peace and freedom." All their imperialist and predatory wars in the XX - early XXI centuries. The USA covered with similar slogans. They say that the “empire of good” sacrifices its blood for the “noble principles of democracy and freedom”, while the ungrateful still have the audacity to be outraged.

The transition of the Central Powers to a strategic defense
Entente plans for 1917 year: bet on a decisive victory in the war
Russian army to the beginning of the 1917 campaign of the year: the approach of the general collapse
Attack without shot: Mitav operation
How Germany began the unlimited submarine war
German submarine vs UK
How the German submarine fleet tried to crush the "mistress of the seas"
The United States used the myth of "inhuman" submarine warfare to oppose Germany
Caucasian front in 1917 year. Baratov corps offensive in southwestern Persia
Mosul operation. How the British, until recently, tried to use the Russian "cannon fodder"