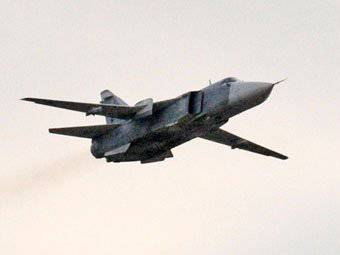 The Su-24 front-line bomber of the Russian Air Force fell in the Kurgan Region. The crew ejected, no one was hurt. The incident occurred on Monday evening, during a training flight. Since it was a non-combat mission, weapons on board was not. The reasons for the third flight incident with the Su-24, which occurred over the past four months, will be dealt with by the special commission of the Ministry of Defense and investigators.

The fall of the third most recent front-line bomber Su-24 of the Russian Air Force occurred in 95 km from Chelyabinsk. According to RIA News source in power structures, Su-24 flew from the airfield "Uprun" in the Chelyabinsk region. The front bomber was piloted by Lieutenant Colonel Gostev and Colonel Yermakov.

The accident occurred in 18.40 Moscow time. According to Igor Konashenkov, the official representative of the Ministry of Defense, the plane fell in a wooded area; there are no casualties on the ground. He clarified that the commander and navigator catapulted. The pilots were not injured.

PLANE FOUND, PILOTS CARRIED OUT ON THE AIR BAG

According to the Ministry of Defense, the crew commander himself, after landing, got in touch with the Shagol airfield, located about 90 km from the crash site. The search and rescue helicopter of the Ministry of Defense set off for the landing site, which delivered the pilots to aviation base Shagol. Now they are going through honey. examination.

According to a source in RIA Novosti in power structures, the wreckage of the car was found. Su-24 fell on the shores of Lake Bolshoy Kashkul in Safakulevsky district. According to him, part of the plane lies on the shore, part - in the lake.

The causes of the flight accident will be established by military investigators and specials. Commission of the Ministry of Defense of Russia. According to the representative of the Ministry of Defense, the commission was set up and will soon go to the accident site to establish the circumstances and causes of the incident. The Military Prosecutor's Office of the Central Military District (Central Military District) began checking for compliance with safety rules and rules for preparing them. The operational-investigative group of the military-investigative department of the RF IC for the Chelyabinsk garrison left for the area where the aircraft fell.

According to a source in RIA Novosti in the Central Military District, according to preliminary data, the failure of one engine could be the cause of the Su-24 accident in the Kurgan Region. A criminal case on the fact of the fall of the front bomber has not yet been initiated. Also, the Defense Ministry has not yet decided to ban flights of this type of aircraft. At the scene, investigators are expected to start work on February 14 morning.

TWO PREVIOUS YEARS OF THE FLIGHT

This accident was the third flight incident with the Su-24, which occurred over the past four months. The previous ones occurred in October and December 2011.

Landing at the Ukrainka airbase in the Seryshevsky district of the Amur region, 20 on October 2011, the bomber Su-24 crashed. The landing gear of the aircraft as a result of a hard landing broke down and it turned over. The crew of the aircraft was killed.

29 December 2011 bomber Su-24 caught fire while landing at the airfield Marinovka in the Volgograd region. The pilot and navigator managed to eject. The plane carried out a scheduled flight.

Su-24 is a Soviet and Russian front-line bomber with a variable sweep wing. This aircraft is designed to inflict missile and bomb strikes in adverse weather conditions, at any time of the day, including at low altitudes with a targeted defeat of surface and ground targets. This aircraft is the most popular in the modern Russian Air Force. At the same time, the Su-24 is very complex in piloting a machine that has a high accident rate: in the period from 2000 in Russia, 16 of flight incidents with Su-24 / 24М occurred.
Ctrl Enter
Noticed oshЫbku Highlight text and press. Ctrl + Enter
We are
The situation in the south-east of Ukraine. Chronicle of events. 3 MayThe accidents of military aircraft in Russia over the past 10 years
Military Reviewin Yandex News
Military Reviewin Google News
23 comments
Information
Dear reader, to leave comments on the publication, you must to register.