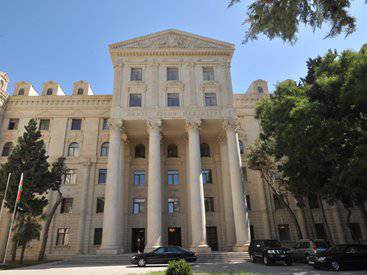 The Tehran note states that Azerbaijan carries out anti-Iranian propaganda in the media, as well as prevents the transit movement of Iranian trucks through its territory. Therefore, as emphasized in the statement, Tehran called on Baku "to stop hostile behavior towards Iran." According to Iranian authorities, Azerbaijan has helped the Israelis, who in recent years have organized the killing of Iranian nuclear physicists, to return to their homeland. Tehran believes that, having completed the tasks, these people returned to Israel through the territory of Azerbaijan.

The official Iranian media previously reported that D. Akhundov, the Azerbaijani ambassador to Tehran, was summoned to the Iranian Foreign Ministry last weekend, where he was given a note of protest over Azerbaijan’s assistance to Israeli intelligence agents. During a conversation with Akhundov in the Iranian Foreign Ministry, they called on Azerbaijan to ban Israeli intelligence officers from using Iranian territory to conduct operations against Iran.

“The information contained in the note of the Iranian side is not true: it is a kind of slander. Azerbaijan is a country that itself suffers from terror, ”Elman Abdullayev told Nezavisimaya Gazeta. According to the press secretary, Baku will never allow its territory to be used for aiding terrorists.

Experts focus on previous events - on those who, most likely, were the cause of the Tehran demarche. Recently (information from the Nezavisimaya Gazeta), the Ministry of National Security of Azerbaijan stated that it prevented a terrorist attack against foreign citizens in Baku. According to the preliminary version, it was prepared by Iranian special services.

The statement noted that the attack on foreigners, in particular, Israeli diplomatic workers, was prepared by Azerbaijani citizens: Ali Huseynov, Rasim Aliyev and Balagardash Dadashev, currently living in the Iranian city of Ardebil and associated with the special services of this country. Hurrying to refute their involvement in these acts, Iran began to wait for the right moment to respond. This "moment" came when the English newspaper "The Times" on Saturday published a confession of a certain agent Shimon. The confession claimed that the Israeli Mossad service sent agents to Baku to spy on Iranian representatives.

The agent told the newspaper: “The border with Iran is almost not guarded, and we get information from people who regularly transfer it. Of course, the Iranians are aware of this. ” Israel has not yet commented on an article in the Times.

Tehran's claims to Baku, as local analysts believe, are groundless. Pursuing a balanced policy, the Azerbaijani government is building friendly relations with its neighbors. As for Iran, official Baku - despite pressure from the West - has repeatedly stated that it recognizes Tehran’s right to develop a peaceful nuclear program and is in favor of a peaceful settlement of the Iranian problem. At the same time, analysts pay attention to the fact that some forces are very interested in spoiling relations between Baku and Tehran. An attempt to spoil the relationship is the article in the Times. Analysts regret that Iran succumbs to provocations.
Military Reviewin Yandex News
Military Reviewin Yandex Zen
7 comments
Ad