The EU is separated by a wall and barbed wire. 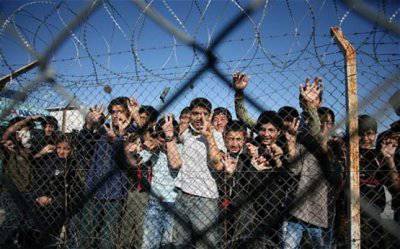 Cheers for breaking the Berlin Wall had time to calm down. The euphoria of universal European fraternization has also long since disappeared. And the world once again plunged into the abyss of global redistribution, to which, apparently, it has a predisposition at the genetic level. New redistribution was expressed in the fact that Greece expressed its desire to build an 10-kilometer wall on the border with Turkey. The wall will be, as the Greeks themselves declare, solid: rows of barbed wire, video surveillance, special security units. In general, everything is serious. But why did Athens need to separate itself from its eastern neighbor, did the Greeks really feel an unexpected original fear of the Muslim population of Turkey?

Not at all! The whole point is that with the construction of the wall, Greece (or other forces) wants to once and for all stop the illegal immigration of Turkish citizens to the EU countries. It is reported that in just one 2011 year, border units detained about 55-ti thousand Turkish illegal immigrants who want to get into the territory of the European Union, where Turkey itself is not allowed. Although here the term “bye” can not be used at all, since after what has happened to this very European Union recently, Ankara does not want to be in a “strong family”, where relationships are measured only by billions of debt obligations.

It would seem that the attempts of the Greeks to separate the wall from Turkey could, to put it mildly, confuse the Turkish Prime Minister Erdogan. However, Erdogan even supported his Greek counterpart Lukas Papadimos in his good endeavors. But where did such unexpected support come from, if Ankara simply resented a few years ago after similar proposals by another Greek cabinet on the separation wall? Perhaps now both Ankara and Athens understand that with all the desire of the main cementing forces of the European Union - Germany and France - the single European family is left to live within the walls of a single “apartment” for as long as it was seen at the dawn of the EU. The mass riots that happened recently in Greek cities have shown that the Greeks are absolutely not going to put up with the role that they are trying to play in their global play “Big Europe”. Dozens of looted and burned shops, cafes, banks and offices of European companies. This is truly: the Greeks vote with stones.

In such a situation, it can be assumed that plans for the construction of a wall between Greece and Turkey were not born in Greek heads. Such an idea could have occurred to someone in Brussels or Paris to create a kind of closed entity that is trying to counter external threats. Only here the whole trouble is that external threats to the European Union fade away to internal threats. If the outlined trend to lower credit ratings and the pre-default hysteria of a number of European countries persists, it will soon be necessary to lay out other walls. For example, the wall separating the European Union from Greece itself, then from Italy, Spain and Portugal. In general, the very same Turkish migrant workers-builders on the construction of walls throughout the south of Europe can also earn good money.

Against the backdrop of this epic with the wall, the Turkish-Greek dialogue began to improve in a strange way. Even the issue of the status of Northern Cyprus is no longer so acute in the negotiations between the authorities of the two states. It seems to be a problem, but so far they prefer not to talk about it, raising mainly the issues of mutually beneficial economic cooperation. At one of the meetings, an epoch-making event took place in general: the Greek prime minister called Erdogan, not a lot, not a little, dear friend. For Greece and Turkey, this is a real breakthrough in relations.

It turns out that the Greeks, it seems, are fulfilling the requirements of their creditors, but still prepare for themselves the ground for alternative cooperation. But if Greece leaves the Eurozone, then cooperation with Turkey can really bring Athens good dividends. One tourist sphere can bring in enormous income to both countries, because today the situation with Greek tourism looks very pitiable due to the uncertainty of further participation in the European integration space.

Of course, it’s still premature to talk about the full-scale rapprochement between Athens and Ankara. There are differences not only on Cyprus, but also on the shelf of the Aegean Sea, and on the maneuvers of warships and airplanes. But after all, modern realities are such that a global division can also be formalized by such alliances, which previously could have been mentioned except in science fiction novels of geopolitical content.