Mikhail Devyatayev. From a concentration camp to the sky!

February 15 2012
22
In the great exploits of mankind precisely because
that they rise so high above ordinary earthly affairs,
something incomprehensible is concluded ...
Stefan Zweig

History the heroic feat of Soviet prisoners of war, which consists in escaping from fascist captivity on a hijacked plane, is still amazing. After 67 years after the daring hijacking of the legendary “ten” German “Heinkel”, the act seems even more daring and implausible. The period of the Great Patriotic War is full of many surprising and glorious deeds of Soviet soldiers, however, the personality of Mikhail Devyatayev stands out among all this kaleidoscope.

8 February 45 from the “Goering Nature Reserve”, the so-called secret concentration camp, which tested aircraft and rocket development, was boldly stolen by the Henkel 111 bomber. To better understand how bold and fantastic was the plan of the Soviet pilot, it was necessary to explain what the military base was. On the island there was a missile test center, defended by an air defense system, an aircraft fleet, and an SS unit.

Combat aircraft were located on a special airfield and were strictly guarded. All the prisoners of war moved through the base under the supervision of armed escorts, and for the night were transferred to the barracks, which were firmly locked. The convoy was located throughout the facility, and the base was considered classified. Those who were guilty and sentenced to death from other German camps were taken to the island of Usedom, they were not taken care of too much and were treated as consumables. However, the prisoners were fed a little so that the prisoners had the strength to work. The daily ration consisted of a piece of bread, a cup of balanda, and three boiled, half-rotten potatoes. According to Mikhail Petrovich himself, as well as his contemporaries, there was only one way out for the captive inhabitants of this base - the crematorium chimney; therefore, the fugitives did not fear their lives for too long. The story was first published orally in the same victorious 1945 year among concentration camp prisoners. On board the plane was a group of Soviet prisoners of war, headed by Mikhail Petrovich Devyatayev, brought to the base as a labor force.

The escape was prepared for a long time, and the group’s candidates were carefully selected. Devyatayev differed excellent organizational qualities. During the period of preparation for the hijacking of the aircraft, the conspirators managed to eliminate from the working site, located near the airfield, all dubious and unreliable people. They got rid of some of them, acting out thefts, others were injured, the group was inventive in the methods. At first, Devyatayev got close to the prisoner of war Sokolov and the equally talented organizer Krivonogov, after which the creation of the main secret team began. Many sympathized and helped the conspirators.

In early February, Devyatayev seriously argued with criminal elements in the camp, as a result of which he received "10 days of life", that is, his death was due to expire. During this terrible period, the unfortunate was subjected to beating, harassment and bullying. This circumstance served as an additional reason for the implementation of the plan. Long before 8 in February, Mikhail Petrovich began, in secret from the escorts, to study the cockpit structure and control panels on the example of the broken parts of aircraft on the adjacent landfill.

How was a pilot allowed to the base with military aircraft, even if a prisoner? The fact is that after an unsuccessful attempt to make a tunnel and escape from New Königsberg, Mikhail Petrovich was sent to a death camp, in which a lucky chance brought him to a hairdresser who handed him a token of a deceased teacher. So the military pilot became a Ukrainian G.S. Nikitenko. The history of the prisoners was not studied in detail, so there were quite a lot of Soviet soldiers on the territory of the base, posing as other persons from among the civilian population.

A serious miscalculation of the German leadership was that a man like Devyatayev was on the territory of Peenemünde. Already 24 June 1941 Mikhail Petrovich shot down his first enemy aircraft, in 44-m he defeated many enemy vehicles, delivered goods and medicines, transported the wounded. A talented pilot with tremendous combat experience and ingenuity was close to the newest armament of Germany. The result was not long in coming, the escape was as audacious and fantastic as the whole service of this person. 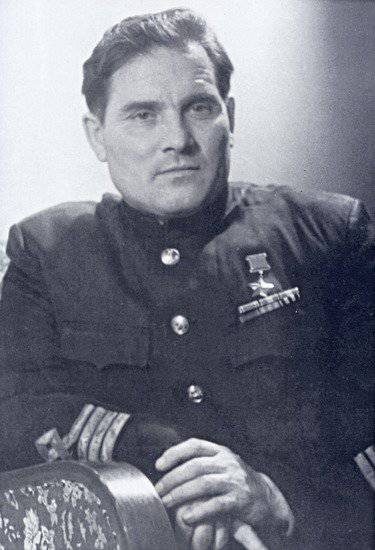 Despite the fact that the plan was being prepared long before the desperate enterprise, the group did not know what kind of aircraft would be captured. By chance, the legendary top ten managed to get on board the Gustav Anton, which was a Graudentz personal car. The group cruelly dealt with the escort and, hiding behind his greatcoat, got to the plane. This is not to say that the takeoff went smoothly. At first, the car turned out to be without a battery, which had to be searched for, being afraid of being detected, then the aircraft could not take off for a very long time due to the fact that the steering wheel was set in the landing position. However, the nature of Devyatayev did not allow the fugitives to surrender and the plane took off. In an interview, Mikhail Petrovich told how once in a camp he had a chance to watch the launch of the Heinkel 111. The pilot, in mockery of the interested prisoner, without realizing it, revealed to Devyatayev all phases of the engine start, which later played a decisive role in the success of the enterprise.

The take-off of the car from the airfield was not immediately noticed, which gave the team precious minutes and a chance to avoid a strike from the ground. The message that "Gustav Anton" took off, was transmitted over the phone to Graudentsu by the head of the air defense. The chief lieutenant did not believe what had happened until he personally was convinced of the absence of a car. The “Catch up and destroy” command was given immediately, but time was lost and Gustav Anton was out of reach. Information about the desperate act of the Soviet pilot and other prisoners of war spread throughout Germany. Himmler and Borman were frantic. Graudenz’s head was saved by a forced lie that the plane was shot down over the sea.

In the air, fleeing several times changed direction, fearing to fly an enemy plane through the territory of the Union. As a result, the landing occurred near Woldemberg in the location of the Soviet troops. The prisoners sincerely believed that they were rescued, but they were still awaited by tests in a filtration camp. Wartime did not spare anyone, and even people exhausted by the fascist captivity were suspected of treason. Those who fled did not complain to the Soviet Union, which is understandable, since the history of salvation still looks fantastic today. Even without finding a basis for the trial of Devyatayev, the command did not trust him with the aircraft. Mikhail Petrovich worked up to the river station in Kazan until 1957, where Korolev found him. Devyatayev was not accepted to positions of responsibility, despite the fact that he had a diploma of a captain. The heroic deed and the fascist captivity was placed in the guilt of a brave pilot who had saved nine more valiant Soviet soldiers. Mikhail Petrovich readily agreed to Korolev's proposal to show the assembly and testing sites of the legendary German V-2, since he remembered well the place of his detention. For assistance in creating the first military missile of the Union P-1, Devyatayev was awarded the title of Hero of the USSR.

Unfortunately, most of the brave dozens after returning back to the front and died, they are also awarded posthumously. This incredible and desperate act went down in history only after the recognition of Devyatayev and his merits. He wrote several biographical works “Flight to the Sun”, as well as “Escape from Hell”, and after 1957, he often gave interviews.

At the end of November, this hero's 2002 was gone. The man of wartime legend, who remained in the shadow of more than 10 years and today is not very famous among his compatriots, although his feat deserves special attention. Devyatayev serves as the epitome of valor and loyalty of Soviet officers and soldiers, and his act must be passed down from generation to generation.