March 28 2017
54
In Pavlograd, a city in 70 km east of the Dnieper, today the funeral of Denis Voronenkov’s murderer Pavel Parshov, shot by a former State Duma security guard, took place. "Businessman".
And the Ministry of Internal Affairs of Ukraine continues to search for the alleged accomplice of Pavel Parshov, and another Yaroslav Levenets native of the Dnipropetrovsk region who served with him in the Donbass volunteer battalion Donbass was declared wanted. According to a source familiar with the investigation, Ukrainian investigators believe that Pavel Parshov and Yaroslav Levenets arrived in Kiev on 21 in March and rented an apartment for three days first, and then Yaroslav Levenets agreed with the landlord to remain in it until 25 in March. The investigation has the shooting of video cameras in the entrance of the house where they lived, another person came to visit the two former fighters of “Donbass”, who has not yet been identified. 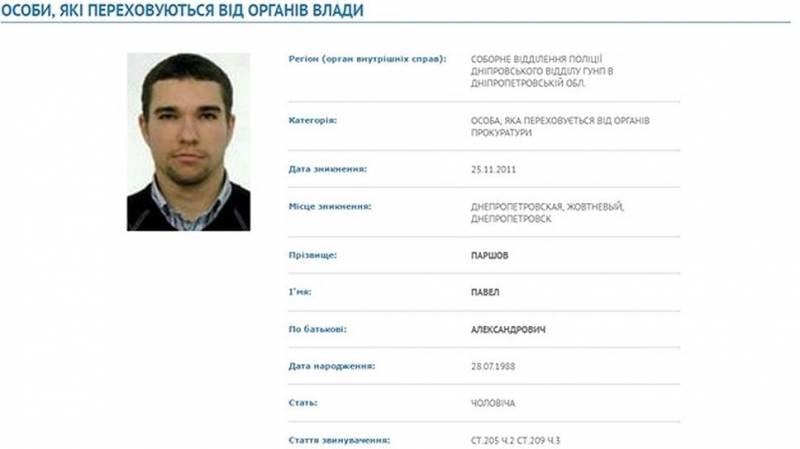 23 in March, on the day of the murder of Denis Voronenkov, Yaroslav Levenets was supposed to appear in the prosecutor’s office to testify. During the presidency of Viktor Yanukovych, he passed through two criminal cases, spent a year and a half in the SIZO, but after the coup Yaroslav Levenets was allowed to go home under house arrest , but almost immediately went to the anti-terrorist operation zone to the east of Ukraine, where he spent several months in the 5 battalion of the Right Sector banned in Russia, and then transferred to the service in the Donbass. In the Yellow Waters, where he lived, Yaroslav Levenets was also one of the founders of the movement “Defense of the Great Ukraine”, and his visit to Kiev had at least one more goal.
22 and 23 in March, he met in Kiev with the former fighter of the Azov battalion, also a native of Yellow Waters, the author of the book “Shirokinskaya operation” Mark Melnik. With him, they discussed the accession of the “Defense of the Great Ukraine” to the “National Manifesto”, which 16 of March was signed by the leaders of “Azov”, “Right Sector” and the Freedom Party Andrei Biletsky, Andrei Tarasenko and Oleg Tyagnybok.
Mark Melnik said that they had discussed the union of the Ukrainian nationalists 22 in March with Yaroslav Levents, and the next day they crossed for a few minutes on the metro and agreed to continue the conversation in the evening. This meeting happened at 15: 40, four hours after the murder of Denis Voronenkov at the Premier Palace Hotel.
I am not ready to cover anyone, but I knew Levenetz from the Yellow Waters from 2010 onwards,
- says Mark Melnik. Mr. Melnik was not acquainted with Denis Voronenkov’s murderer Pavel Parshov.
Deputy of the Verkhovna Rada and adviser to the head of the Ministry of Internal Affairs of Ukraine Arsen Avakov Anton Gerashchenko, who first wrote on his Facebook that Pavel Parshov was recruited by the Russian special services, trained in Russia and killed Denis Voronenkov on their order, said he had no doubt that that the agent of the Russian special services is Yaroslav Levenets. Among the Ukrainian nationalists who fought in the east of Ukraine, there are, in his words, “at least dozens of agents” recruited by Russian intelligence.
Obviously, the Russian special services are constantly increasing their agents in Ukraine,
- Ilya Ponomarev, a former State Duma deputy, agrees with him, also confident that the customers of Denis Voronenkov’s murder are in Moscow.
This is one of the reasons that hinders the legalization of Russians, who are fighting in the ATO area on the side of Ukraine,
- he said.
It is worth adding that most likely the third “agent of the Russian special services” will soon appear in the case, because, according to Gerashchenko, the name of this person is already known to the investigation.
All contacts Voronenkov were in his phone,
- specifies Mr. Gerashchenko. -
The phone was removed immediately after the murder and is being studied.
In the near future, Prosecutor General of Ukraine Yuriy Lutsenko will name the name of the person who appointed Denis Voronenkov for a meeting, canceled it at the last moment, but brought the killer to him in this way.
But at the moment Yuriy Lutsenko is in Brussels and, apparently, can not tell anything. Long away...