April 1 2017
3
The once-unified system of rocket-space defense is under threat of the final destruction of its operational and organizational structure, as well as the oblivion of the true content of the term "RCU" due to its interpretation as "reconnaissance of the space situation". An analysis of the latest military-scientific conference in the Tverskoy Military District of the East Kazakhstan oblast confirms that the urgency of the problem is only increasing.


The status of command of the Armed Forces armies does not correspond to the level, scope and importance of the tasks of aerospace defense. It is not at all news ("VKO: and again at the fork"). When, on the basis of the Air Force and the Armed Forces of the East Kazakhstan Region, a new type of Armed Forces, the RF Aerospace Forces, was formed, it was assumed that the main operational-strategic problem of organizing joint actions against any aerospace enemy would be completely resolved. Let's try to evaluate the result obtained at the moment.

With the creation of the VKS, the question of the understated status of the command of the troops of the EKR was decided in an original way - it was eliminated. And all the supporting and special space-based facilities, together with the ground infrastructure of the radar support (RLO) of the rocket-space defense (RCU), were pulled out of the unified control system of joint strategic operations of the attack and defense forces of the VKS, combining its status to the command level of the Space Forces in violation of all laws of the art of war.

The operational and strategic tasks of organizing joint strategic actions of the Armed Forces on defense from SVKN strikes and the very concept of "EKR" arose as an objective reality not today, but still in 1950, due to the emergence of a nuclear-missile world weapons and with the creation of the Third Main Directorate (TSU) of the Council of Ministers of the USSR under the leadership of Lavrenty Beria. The most experienced officers of the 4th research institute were then seconded to TSU to supervise and solve all military and scientific and technical problems associated with the creation of the world's first highly effective defense system of Moscow from air (S-25 "Golden Eagle") and missile (A- 35) attacks. There were well-known officers and generals, such as Hero of the Soviet Union Sergey Nilovsky, who later headed the 2nd Central Research Institute of Defense. But there were others unknown to the general public during life and, unfortunately, almost forgotten by everyone after their death or death. One of these is Lieutenant General Ivan Baryshpolets (“Curator of the Missile Shield”), who became famous in the battle of Moscow and was deeply classified after the Great Patriotic War, the first commander of the Missile Defense Troops of the Moscow Air Defense District, a direct participant and leader of all practical and theoretical activities related to military construction the world's first unified system of missile systems for the aerospace defense of Moscow, as well as with the creation and development of the theory of the joint use of various arms of the East Kazakhstan region in cooperation with striking forces and means of our distant aviation and Strategic Rocket Forces. 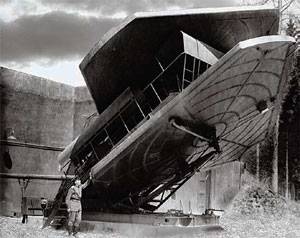 According to the memoirs of the veterans, Ivan Efimovich, supervising the creation of an air defense system (C-25) and then ABOUT (A-35) of the capital from the TSU Sovmin, first viewed them as two components of a single defense system against air and space attack . It was this military plan that he repeatedly reported to P. F. Batitsky both as commander of the Moscow Air Defense Forces and as commander-in-chief. The author of the scientific and technical development of a missile defense system (A-35), Grigory Kisunko, was no less actively involved in the creation of the C-25, along with other military scientists who were unjustly forgotten today.

The old photo taken by 22 June 1977 of the year is the meeting of the most secret secretary of the modern ATP system of the country with one of the first untimely death of its founders - veteran of World War II, Ivan Baryshpolts on his birthday - now at his grave. All of them: Ivan Efimovich himself, and his colleagues who came to the cemetery then, and other veterans of the Great Patriotic War — participants in the creation of the first EKO system in Moscow, including the founders of missile weapons and military equipment EKO in our country for a good reason; Pavel Kuksenko and Sergo Beria deserve the blessed memory of grateful descendants.

Today our main goal is not only to restore the memory of the unjustifiably forgotten ancestors and founders of the country's aerospace defense system, but also to study their achievements with maximum use of everything positive for improving the modern system of ensuring military security in the aerospace sphere and joint strategic actions against any aerospace the adversary. This is also useful because the experience of building objects, creating systems and groups of the Air Defense and Missile Defense Forces of Moscow, organizing their joint use in cooperation with the shock forces DA and Strategic Rocket Forces gains special relevance in connection with the creation of the main command of the Aerospace Forces. The accumulated knowledge must be taken into account when developing the theoretical basis for the actions of all the military and special forces of Russia in the aerospace field with the necessary for effective leadership building up the capabilities of the Main Command Committee of the Aerospace Forces to the level of the strategic aerospace command in its global theater. It is also important to clarify the appropriate structure of this body and clarify its role in relation to the National Center for Defense Management of the State (NCUOG) in peacetime and wartime. Accordingly, the main and central directorates and services of the VKS should be lined up, the overall appearance of this new, unified view of the Armed Forces and the required quantitative composition of percussion, defensive, supporting and special forces and equipment should be determined.

This experience is especially important for creating an expedient grouping of the operational command of the defense forces of the VKS (EKR forces), which are based on anti-aircraft and anti-missile reconnaissance-fire complexes (ROK), as well as their construction in strict accordance with the laws of military science to fight against any aerospace the adversary.

Taking into account the significance of the SAR for conducting reconnaissance of aerospace and the control of anti-aircraft missile and anti-missile fire, this type is included into the composition of the ROC constructively or through a single automated LMS.

It is also known that for the implementation of other types of combat support in the aerospace sphere, such as communications, navigation, electronic warfare, cartography, meteorology, ZOMP, in the interests of hostilities, certain forces and means of different basics are specially allocated from the corresponding arms central subordination and special services, including suitably equipped military satellites.

The problem of the correct combination of questions of the conduct of combat operations of the air defense and anti-missile defense forces and their comprehensive support, including SAR, arose from the very beginning, even when creating a unified EKR system in Moscow (C-25 and A-35). Analysis of organizing events held over the past three years shows that the proper interaction of the structures of aerospace defense has not yet been established. Moreover, with the development of means and methods of warfare all over the world, the problem continues to grow, being associated with a rational distribution of the operational and administrative functions of directing and managing construction processes and the joint use of percussion, defensive, support and special forces and assets of the armed forces, other troops, military formations and bodies of special services of various sizes.

The solution of this basic problem, which lies at the basis of the rational organization of the processes of creation of the VVST, as well as planning strategic actions to ensure the military security of Russia in the aerospace sphere, has always been actively engaged in military-scientific and operational bodies of the General Staff. Prior to the restructuring, conferences, seminars, research exercises and command-staff trainings were regularly held, at which various solutions to the problem were discussed. One of them was still recognized as the most rational in 1996. Over the past three years, it has undergone minor adjustments and changes, but, unfortunately, it still remains a purely theoretical result. The fact is that the main idea of ​​this option, consisting in the rational distribution (separation and combination) of the operational and administrative functions of leadership and management of the construction processes and the joint use of percussion, defensive, and special forces and equipment of VKS, is still not accepted by us. all, implemented hesitantly, mostly partially and most often formally. This also applies to operational issues related to the need to correctly establish the status of the supporting forces and facilities that are part of the videoconferencing system, without unduly overestimating it.

To put up with such a state of affairs and follow the path of deliberate deception with the realization of a well-known, scientifically-based solution of this problem to crime like.