March 29 2017
119
Agency "Interfax-AVN" ("Agency of the military News") reported that due to delays in the implementation of the Almaz Antey Concern of Aerospace Defense development work, the delivery dates for Admiral frigates are in jeopardy fleet Soviet Union Gorshkov "and" Admiral Makarov. 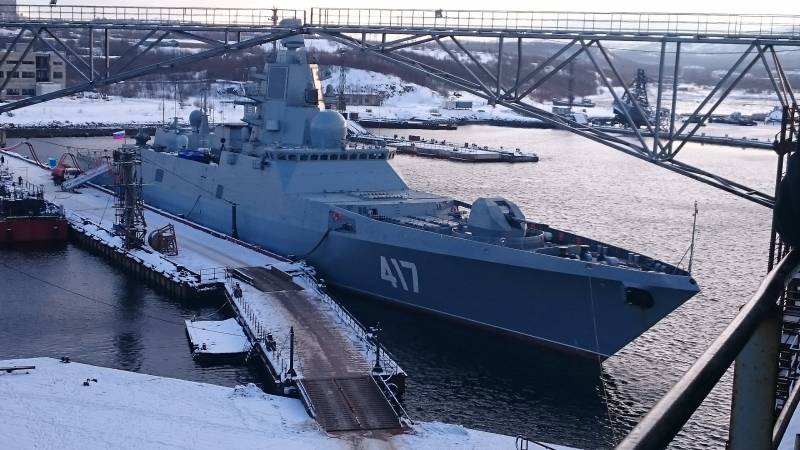 The Ministry of Defense in the person of the Deputy Minister of Defense, General of the Army Yuri Ivanovich Borisov, confirmed this sad fact.

“Due to the Almaz Antey concern’s late execution of development work on the Redut and Shtil element, the delivery times of the 22350 Admiral Gorshkov and 11356 Admiral Makarov projects are under threat of failure.

This statement was made by Borisov at the events of the Unified Day of Acceptance of Military Equipment, which took place on 24 in March of this year.

What was the reason for this very unpleasant fact?

According to Yury Ivanovich, “the main reasons for the late delivery were the low level of organization of their own work, delays in the supply of components, insufficient production capacity and the lack of qualified personnel.”

Just yesterday, we talked about problems in the field of space technology. And now the Navy is added to space? It really makes you think about many things at once.

Let's just start to try to deal with all the points of the Deputy Minister’s statement.

Low level of organization of own works.

Serious accusation of management. Especially, if the unavailability of the air defense missile system is the most significant reason for the entry of the ship into service. It is worth recalling that the Russian president last year announced the deadlines for the delivery of ships. November 2016 of the year. However, the cart, that is, frigates, is still there ... in the shipyards.

Before you go smoothly to the manual, it is worth looking back. AT history. This is sometimes useful.

The Polimen-Redut anti-aircraft missile system was developed from the Altair Marine Research Institute of Radio Electronics, 1991. Yes, it is this enterprise, and not “Almaz”, as many media outlets write.

Altair was created in the distant 1933 year, and in fact was the only and unique research institute that worked exclusively for the needs of the Navy. It was in the walls of MNIIR "Altair" were born such famous products as "Wave", "Mosquito", "Shtil", "Fort", "Blade" and less well-known, but no less significant. Two Orders of Lenin on the banner of the institute - the best evidence of this.

In our time, Altair was the leading domestic developer of medium and long-range air defense systems. Was.

22 December 2010 of the year as a result of the merger of JSC "Altair MNIIR", JSC "NIEMI", JSC "MNIIP" and JSC "NIIRP" created an interspecific lead developer of air defense systems GSKB "Almaz-Antey".

Since there is no point in telling how it was in 90's with financing, more precisely, as it was not, it is clear that the development was carried out at the expense of the enterprise's initiative. Hence, as if the long development time.

But other times came, and, as sources say, normal funding from the state began with the 2006 year, and the “process has begun”. Already in the second half of 2010, bench tests began with the planned installation time on the ship in November 2011.

And then 2010 struck the year, at the end of which Altair was incorporated into the Head Specialized Design Bureau (GSKB) of the Almaz-Antey Air Defense Concern (now PJSC Almaz Scientific and Production Association).

Many experts not even from among the “liberal” confidently believed that it was just a raider seizure of a strategic research institute.

What happened next was discussed on almost all Russian military sites, including ours.

And the modern classic script from "effective managers." Deprivation of financing, withdrawal of funds on accounts (“we will buy you everything and bring to the doorstep”), mass layoffs and reductions.

Who "flew" in the first place? Naturally, the "old guard". Director, Deputy for Research - Chief Designer, Deputy for Production, Deputy for Regime and Security, Deputy for Finance, full accounting from the chief accountant to the cashier.

Naturally, the “young effective” team from among the friends and confidants of the director of the new education Neskorodov immediately came to the vacant places.

Yes, yes, the one who was recently thrown out with a “wolf ticket” under the “loss of trust” clause.

Instead of a production workshop that had existed for decades, a subsidiary company, Experimental Production OJSC, was quickly welded up, with which they began to work under contracts.

And most importantly: for some reason, the new team decided to completely abandon development for the Navy, preferring to work in the land sector.

As I understand it, having pretty much rummaged in articles devoted to this topic, if no one has strained himself with “Poliment-Redoubt”, and the works have actually been curtailed.

Nevertheless, the "Admiral Gorshkov" from the same 2010 of the year was already launched and somehow, but was being built. And "Admiral Makarov", too. And by November 2016, according to Putin’s instructions, the ships were to be put into service.

Apparently, in the shipyards, the closer to the target date, the more “expressed concern”. But "defective" from "Almaz Antey" was not up to some sort of naval air defense system, it was already "not their subject."

But realizing that a kick from the customer (read Putin) would follow, I had to tense up and the air defense system for the frigates to dolep and send to the ships. But for some reason they did not work as they should.

The result is sad: Neskorodova was thrown out, “Polyment-Redut” does not work, the frigates were not commissioned. But it's not November 2016, it's like April 2017 is on the nose ...

And, what is most unpleasant, there is practically no one to bring the air defense system on frigates. "Defective managery" Neskorodova successfully dealt with those personnel who could do something. This year will be 7 years from the moment Altair ceased to exist. Who will build the air defense system, who will upgrade them - the question ...

What worries you most is that everything is done as a carbon copy. The scenario is the same for Moscow, for Voronezh, and for Omsk.

Recently, I sorted out the bones of what is happening today at KBCH, one of the pillars of space engineering. And here is an absolutely similar case.

Everything is the same: the arrival of a new leadership, who definitely understands in production issues less a locksmith from this production, but - “effective”.

Kamyshev, a stunned specialist in the production of space engines, spent his entire career moving through banks and dubious structures (in the biography it says “and others”), directed by Rostelecom.

In the 1990 year, Neskorodov graduated from the Moscow Physical and Technical Institute with a degree in engineering physics, worked for three years as an engineer at the Central Institute of Aviation Motors. P.I. Baranova, then moved to Tveruniversalbank, and from there to Almaz Antey.

"Effective" twins, is not it? We find. And the worst thing about it is that those who promote these miscarriages of the banking sector to such important positions are also found.

Neskorodov was dismissed by the board of directors of the company “for the systematic failure to comply with the instructions of the concern's management, omissions in work and loss of trust”

And now let's think about how it will help frigates? Yes, nothing.

Our fleet does not intend to abandon the Polymer-Redut air defense missile system, not because, by the way, there are no other options, but because the idea and execution were from knowledgeable and understanding people. “Polyment-Redut” is a great system, so that people don’t write there, especially “according to test results”.

The tests were carried out by interested people, but who prepared the air defense system for them and how competent these workers were is still a question. Personally, I strongly doubt these experts. Most likely, those who for some reason were still on the staff and were at least a little aware of it were sent “to hell”.

After all, experts in offshore development have long been no longer needed at Almaz Anthea, back in 2014, Neskorodov stated that "the development of land-based air defense systems will become the main focus of the concern's activities."
Of course, there is an effective sense in it. It is much easier to sell packs for full-fledged C-300 and C-400 dollars to everyone, than to bother with some frigates ...

I do not envy the new general director of Almaz, Gennady Bendersky. The man did not just fall into the fire, but in full. I am glad, however, that before “Almaz Antey” Bendersky was not sitting in a bank, but was in charge of the Lianoz Electromechanical Plant (LEMZ). I did not turn over credits, but by an enterprise that produced radar as well. Not air defense systems, but near.

And the career of Gennady Ivanovich began in the year 1982 guess where? Not in the bank? Guess it! On the same LEMZ, process engineer. And he worked at this enterprise until, obviously, he did not press. Steadily until the appointment of Almaz Antey. Not an “effective manager,” an engineer.

A good appointment, no doubt. But will it give fruit, given that the deadline for the delivery of ships has been postponed only to July of this year, and will you have to act under conditions that are not just time trouble?

Still, as it was stated at the official level, it comes down to the absence of qualified personnel dismissed and dismissed by the previous director. Yes, and his own "forge personnel" "Altair" also destroyed.

It remains only to wish Gennady Ivanovich success in solving this most difficult task, health and strong nerves. And to curse the "defective managers" team Neskorodova.

The situation may be reparable. You can optionally restore the "Altairov" frames. Even need. But here is a question to the top leadership of our military industrial complex and specifically to the curator Mr. Rogozin.

After all, in fact, it is precisely them who are responsible for the failure to fulfill the state defense order. And for the appointment of "effective managers" in the management of key enterprises of the military-industrial complex.

And forgive, but loud statements and dismissal of the guilty situation is not drastically improved. Yes, the situation will not make it even worse, of course, this is a plus. But if we want to see a real revival of our military-industrial complex, then competent specialists, engineers, and not former employees of banks must be in key positions.

It seems that Mr. Deputy Prime Minister Rogozin simply does not understand this. And to act today for the sake of tomorrow must be more effective, if, of course, we all want it tomorrow.