Medvedev allowed to declassify the shooting at Katyn 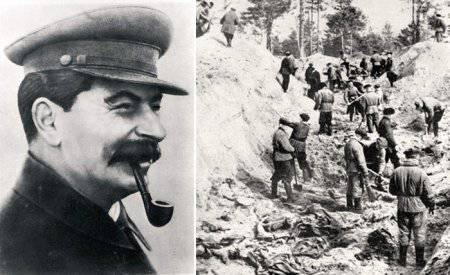 Documents relating to the Katyn tragedy are now available to everyone - the Russian Federal Archival Agency (Rosarchiv) has posted their electronic versions on its official website. According to ITAR-TASS, the papers were placed on the Internet by decision of the President of the Russian Federation Dmitry Medvedev.

The head of the agency, Andrei Artizov, explained to Interfax that in this way Russia demonstrates absolute openness to Poland on this issue: “We, the Russian side, demonstrate absolute openness in the story about what happened in Katyn, what happened in other places with Polish prisoners of war, made public all the main documents about this event. "

“Once again, I want to say that electronic images were not placed anywhere on the official websites of our governmental bodies, and the placement on our official website is the first,” said Artizov. In addition, he noted that since these were documents of special importance, only a few had top access to them.

“These are the famous documents from the package number 1, the package that was stored for decades in the closed archive of the Politburo of the Central Committee of the CPSU for special importance, and only the Secretary General and Head of the Office of the Central Committee or the head of the general department in the presence of the Secretary General had the right to open this package. No one else had access to this package, ”the head of Rosarkhiv said.

The document number one is a memorandum by Beria addressed to Stalin. It shows the figures that the prison camps contain everything, not counting the soldiers and non-commissioned officers (then sent home), 14 thousand 736 former officers, officials, landowners, police, gendarmes, jailers, osadzhany, intelligence, by nationality over 97% - Poles. The report ends with a sentence: “Based on the fact that all of them are inveterate, incorrigible enemies of the Soviet power, the NKVD of the USSR considers it necessary: ​​Consider cases in prison camps for prisoners of war with a special procedure, using capital punishment - execution. Consideration of the cases to be carried out without summoning the arrested and without showing the charges ... ”

Andrei Artizov noted that “this note contains genuine resolutions of Stalin and a number of other members of the Politburo, that is, Voroshilov, Molotov, Mikoyan. “In the same place, in this package, there is the text of the Politburo resolution of 5 March 1940 of the year, where agreement is expressed with Beria’s proposals on the execution of Polish officers,” said Artizov.

Recall that in the execution of more than 14 thousands of Polish officers in Katyn, Soviet propaganda accused the Germans. They conducted an “independent investigation” at 1943, inviting specialists from several countries. The Soviet authorities called the findings of this commission "Goebbels propaganda."

This is what is stated in this in one of the officially published documents. KGB Chairman Alexander Shelepin writes to Nikita Khrushchev:

“On the contrary, any unforeseen contingency can lead to un-decryption of the operation, with all the undesirable consequences for our state. Moreover, there is an official version regarding those shot in the Katyn forest, confirmed by an investigation by the Soviet authorities in 1944 that was called the "Special Commission for Establishing and Investigating the Execution of Polish POWs in the Katyn Forest by Polish Fascists".

According to the conclusions of this commission, all the Poles liquidated there are considered to be destroyed by the German occupiers. The materials of the investigation at that time were widely covered in the Soviet and foreign press. The findings of the commission are firmly entrenched in international public opinion.

Based on the foregoing, it seems expedient to destroy all accounting files on persons shot in 1940 for the above operation. ”

Approximately such an “unforeseen accident” happened - in 1992, Russian President Boris Yeltsin handed over to the Polish side copies of these documents. For a long time there were controversies around the papers - whether to consider them genuine. Several historians, political and public figures, such as Yuri Mukhin, Alexander Shirokorad, Vladislav Shved, Viktor Ilyukhin considered them fake. Unfortunately, it was not possible to quickly contact the listed people of the SP.

Alexander Prokhanov, the editor-in-chief of the newspaper Zavtra, who had previously declared his adherence to the “Soviet” version, explained his position in an interview with “SP” as follows:

“I really believe in our propaganda - and I believe in Stalin, and Khrushchev, and Brezhnev, and Gorbachev, and Putin, and Medvedev. Now they are telling me that it was the Soviet who were shot, and earlier they said that the Germans were shot. And what am I - I'm a fool. I'm just an ordinary citizen of Russia, opening my mouth, listening to all kinds of noodles, and I am glad that the more of them, the more happy I am.

- So you consider this publication a part of propaganda?

- I think this is true, but that was also true. This is the power of our propaganda. It is necessary as much as possible ... to hang up on Russian history and to the Soviet Union, then we will win in this world. Then we and Siberia will lose, it will not be a pity. This is absolutely correct, we not only shot the Poles, we also burned all the Jews in furnaces, burned the damned Soviet authorities and burned the Jews, and, by the way, destroyed the Indians in the USA. Now we will publish the archives, they are preparing, they will say that Stalin destroyed the American Indians. Here is my point of view. ”

In the Memorial Society, which for years sought to publish materials on the Katyn case, they consider that Russia has taken an important step towards the final settlement of this conflict. However, as noted by Jan Raczynski, a member of the board of the Memorial Society, far from the whole truth is revealed.

- What are these documents, can you learn something new from them?

- The published documents from the so-called “Package No. 1” have been known to specialists for a long time; in 1992, copies of these papers were handed over to the Polish side, and since then they have been well studied. We published them in our publications.

What happened today is an important symbolic step, this is the first official publication, on the official website, by originals, and now anyone can read. These documents have already been declassified earlier, but now there is an indication that they are reproduced in the original, and there are those responsible for the accuracy of the publication.

This is another step, showing that no one questions the guilt of the Soviet leadership in this crime, and I would like to hope that it is not the last. To remove all the questions remains to do quite a bit.

- The main remaining issue is related to the investigation of the Katyn case, which was initiated in 1990 year and was conducted by the Chief Military Prosecutor’s Office. In 2004, the investigation was discontinued, with the cessation order itself and most of the criminal case file being classified as secret. From our point of view, this secrecy is illegal, and we are fighting for the abolition of this decision.

- At what stage is the process?

- What else can reveal?

- The problem is that we do not know the names of those whom the investigation found guilty of this crime. According to indirect data, the names of Stalin and his minions are not there. It is also unknown what exactly the investigators managed to establish. If, in relation to the officers who had been shot, secondary documents could be used to establish who was shot and where, but for the prisoners - and there were about 7000 people, they were shot later - where they died and were buried, for the most part, is unknown. There remain unresolved issues, and there is no reason to hide Russia’s - these are crimes of the Soviet leadership, not Russia and not the people.

Of course, the question of the rehabilitation of the executed remains unresolved. This can be done by a decision of the president, or in the usual way by the prosecutor’s office, which has so far refused to do so.

- As far as I got acquainted, all the cases were destroyed. Any chance they will be discovered now?

- In all likelihood, they are really destroyed, although, again, the investigation should have verified these facts as well. In addition, there are different sets of documents that reveal certain details. For example, published not so long ago in Novaya Gazeta, as near Kharkov, one of the graves of Polish prisoners of war was attempted to destroy in the 60s, after local residents discovered it. All sorts of details surfaced later.

- What were the motives to classify the investigation?

- I think that this is more stupid than evil intent, I suspect that there were no serious motives. Here, probably, the general mania of secrecy that exists since the Soviet times, when we have closed everything in a row without any sense, has played. On the other hand, it may be following purely formal grounds - from some archives materials were transferred without a formal procedure for declassifying, and on the basis of this it was decided to close everything.

- It is unlikely to help. It rather means that the movement towards opening has begun.

In Katyn, Vasily Blokhin, the most famous Stalinist executioner, supervised the executions. He fit into the Guinness Book of Records as a executioner-record holder - for the entire period of his activity from 1926 to 1953 year (before retirement), he personally shot about 20 thousands of people. Two other executioner-prize-winners Maggo and Nadaraya fell behind Blokhin by a wide margin - approximately 10 thousands of people shot for each.

In 1991, during interrogation at the USSR General Military Prosecutor’s Office, such a dialogue took place between one of the members of this firing squad and the investigator.

-If I understand correctly, Polish prisoners of war were shot from the "Walters". Yes?


They buried Vasily Ivanovich Blokhin, with the rank of Major General, in 1954, at the Novodevichy Cemetery. In the same place, on places of honor, are buried also other Stalin executioners (including the prize-winner Maggo). 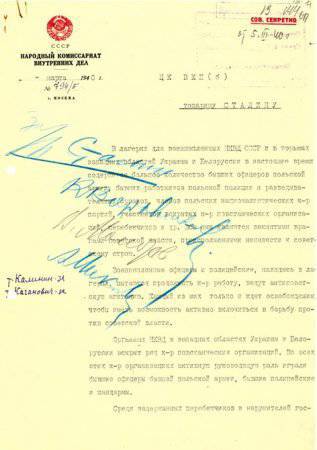 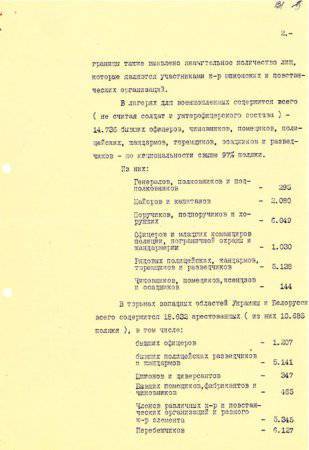 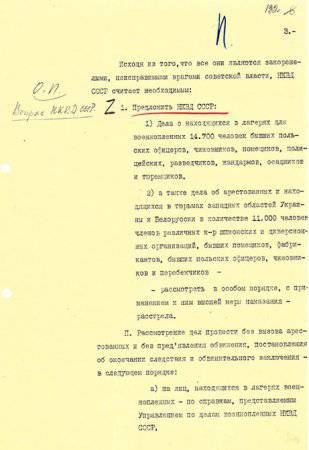 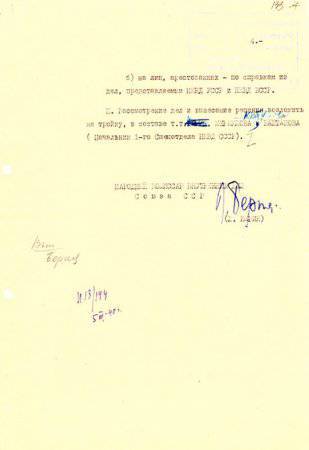 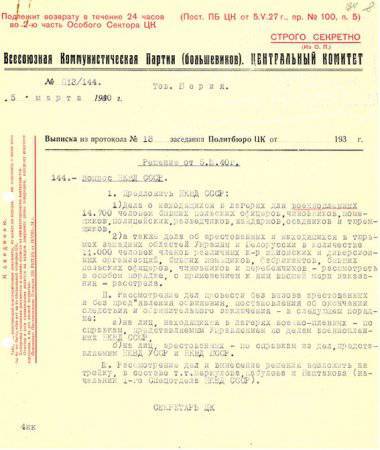 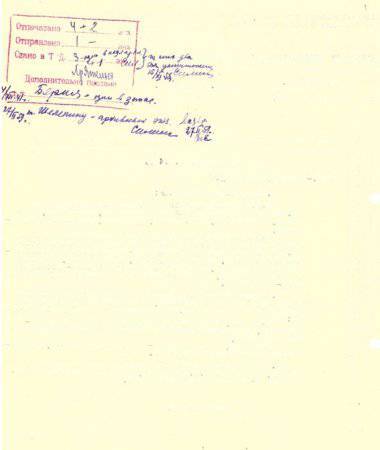 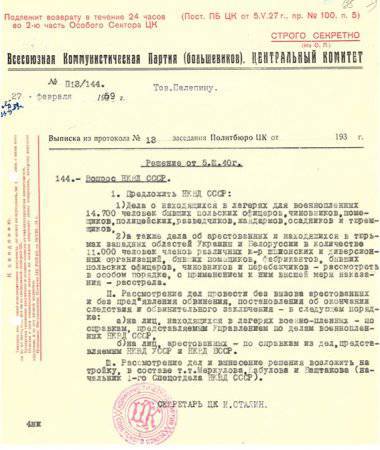 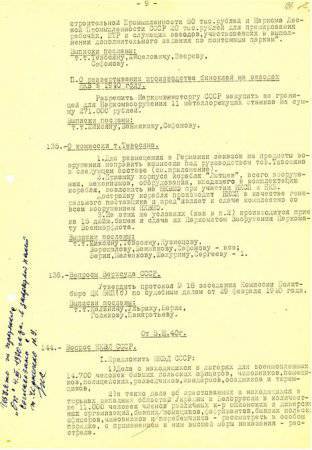 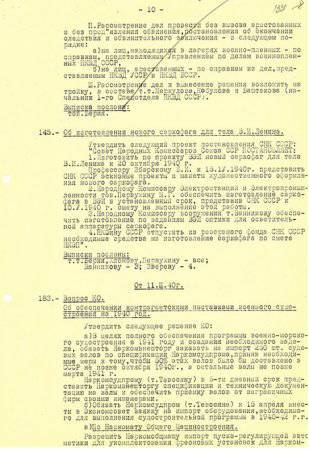 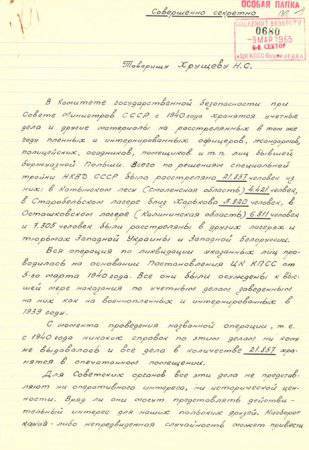 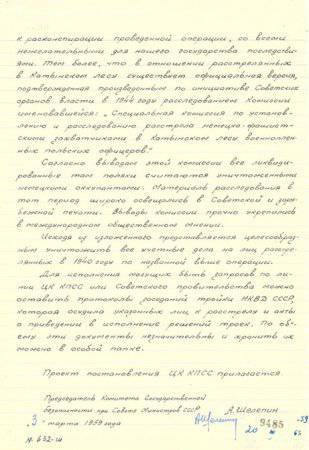 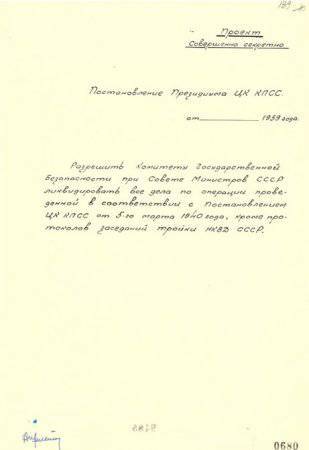 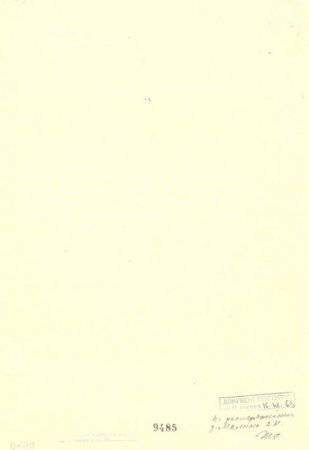 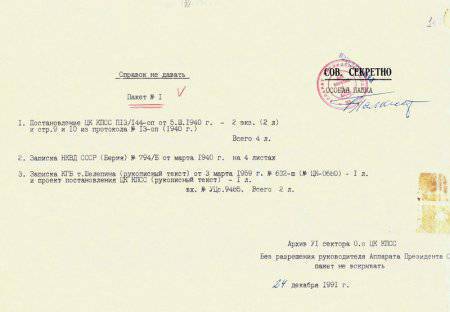 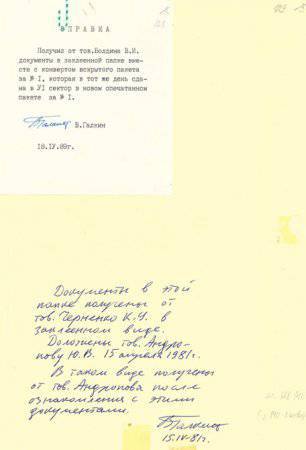