March 23 2017
29
The Cabinet of Ministers of Ukraine approved the number of Ukrainian citizens to be called up for military service in April-May 2017, in the amount of 14 thousand. 135 people and allocated 46,5 million UAH for these purposes.
According to the order of the Cabinet of Ministers on March 22, out of the total number of 9 draftees, thousands of 135 people will be sent to the Armed Forces of Ukraine, 4,2 thousand to the National Guard and another 800 to the State Special Transport Service. 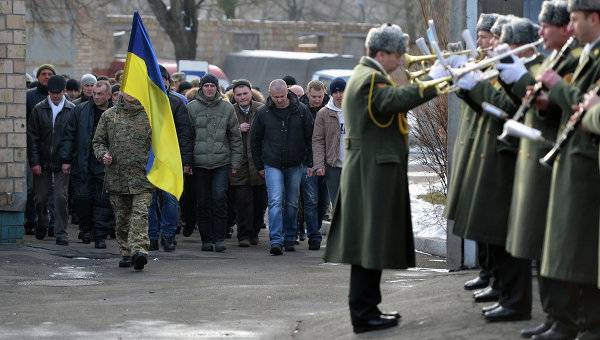 The amount of expenses per recruit is 3 thousand. 293,13 UAH, of which: 3,2 thousand UAH - for the payment of cash assistance to citizens of Ukraine who are called up for military service; 93,13 UAH - for the preparation and conduct of conscription for military service (excluding funds for food and transportation of citizens of Ukraine, called up for military service, from the collection points of the regional, Kiev city military commissariats to the duty station).
Before the 5 of April, the Ministry of Defense, the Ministry of Internal Affairs, the State Specialized Transport Service were instructed to transfer funds to the accounts of the regional military registration and enlistment offices and the Kiev City Military Commissariat; million 5 thousand 1 UAH and 737 thousand 036 UAH, respectively.
According to publications in the Ukrainian media, the service life of the conscript army in 2017 in Ukraine remains the same: a year and a half for people who have not received a diploma of higher education, and a year for those who have the required diploma of a specialist or a master. Moreover, the bill now has information that, in the event of a risk of war or an unstable situation in the state, the term of appeal can be increased (the duration is determined by the evolving situation). The conscripts can receive material assistance, which will be two subsistence minimums - around 3000 hryvnia, and also (as a “dessert”), the authorities say that conscripts will serve outside the site of the territory of military operations in the area, there are enough contract soldiers and volunteers.