Our country can rightly be called the birthplace of world tank design. And although the first tanks that appeared on the battlefields of the First World War were built not in our country, but in England, this statement is true. After all, the main distinctive detail of any old and modern tank - the caterpillar - was born on the banks of the great Russian river Volga, in the Saratov province. A native of the village of Nikolsky, Volsky Uyezd, the peasant Fedor Abramovich Blinov received a patent (“privilege”) in 1878 for the “Car with endless rails for the carriage of goods by road and country roads”. This design and became the ancestor of the tracked propulsion. A talented student of Blinov, Yakov Vasilyevich Mamin, in 1903, designed a combustion engine that worked on heavy fuel. In this engine, the designer made an additional camera with a heat accumulator in the form of a plug-in copper igniter. Before starting the engine, the ignitor was heated from an external source of heat, and then the engine worked for the rest of the time due to self-ignition, using crude oil as fuel. On the engine Mamin received a patent in 1903 year. This circumstance gives the right to assert that a high-compression, non-compressor engine operating on heavy fuel was first built in Russia.

This engine is far ahead of its time.

The whole world at the beginning of the last century lived with the expectation of war, what kind of humanity did not yet know. On the eve of this war, the states united in military-political alliances, waged "small" wars, honing the combat skills of their armies, inventing new types of weapons. One of them becomes a tank, which first appeared on the battlefields of 1916, and overcame all the ideas of war at that time.

The tank was supposed to arm 120-mm naval gun, which was mounted in the nose of the hull. A machine-gun turret mounted on the roof, which could be rotated 360 °, was raised outwards and lowered inwards also by means of a pneumatic drive. Obtaining the required amount of compressed air in the power compartment was provided by a compressor driven by an engine.

For the transfer of the tank by rail, he could be put on the ramps and move under its own power.

It is admirable that the talented Russian engineer looked far ahead, armed his brainchild with a large-caliber gun (guns of such caliber, 122-125 mm, are installed on almost all modern domestic tanks). The tanks, which crawled out onto the battlefields of the First World War, were much less armed, but they successfully carried out combat missions. Undoubtedly, the Mendeleev tank, had it been launched into mass production, would have been the most outstanding weapons that war, invulnerable and formidable. Interestingly, many engineering solutions identified in the design of the tank by Vasily Mendeleev were implemented much later and no longer in our country. For example, the air suspension was used in the Tetrarch light British airborne tank, and the Germans copied the hull lowering system onto the ground in the 1942 exactly, practically without any changes, using it in the super heavy 600 self-propelled Tor mortar. Nevertheless, the priority here still remains with Russia.

In the 1914 year, at the height of the battles of the First World War, two projects of tracked armored vehicles arrived at the Main Military Technical Directorate. The first is the “Rover” of the Russian inventor A. A. Porokhovshchikov. 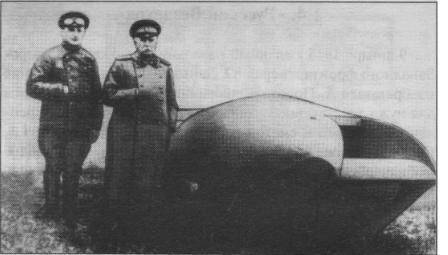 After long delays 13 January 1915, Porokhovshchikova was allocated for the construction of an all-terrain vehicle 9660 rubles. And 1 February 1915 of the year in the workshops located in the barracks of the Nizhny Novgorod regiment, stationed in Riga, the designer has already begun to build a prototype. After three and a half months, the all-terrain vehicle left the workshops - its tests began. This day - 18 May 1915 of the year - and should be considered the birthday of the tank.

The first tank in the world had all the basic elements of modern combat vehicles: a hull, armament in a rotating turret, an engine. Body - streamlined shape, armor thickness 8 millimeters. Very significant angles of armor made it more resistant to the effects of armor-piercing agents. Chassis defended by bulwarks. The prototype case consisted of several layers of steel with a layer of hair and sea grass and did not break through with machine gun bursts.

A. A. Porokhovshchikov's all-terrain vehicle, with a combat mass of 4 tons and a crew of two people, developed speed along the highway to 25 kilometers per hour.

On the hard road, the Rover moved quite confidently, despite the weak engine (10 hp), and on December 29 1916 reached 40 versts / hour, which was an exceptionally high figure. At the same time, the car could not move at all in loose snow. Gunners asked for appropriations for the construction of an improved model, "Rover-2", already with armored hull and armament of four machine guns, but he was denied this. In its conclusion on the 2 ATV, the GVTU rightly (which happened infrequently) pointed out a number of project flaws, such as the impossibility of simultaneous combat operation of three machine guns in the turret (or the conning tower, as the inventor called it), lack of differential the propulsion device, the rubber tape slipping along the drum, and indeed its vulnerability, the machine’s low permeability when driving on loose soil, extreme turning difficulties, etc. It is possible that in the future A. Porokhovshchikov would have been able to eliminate the most serious shortcomings, only there was no time for that in the 1917 year. Yes, and the front first of all needed a special positional tank, capable of tearing multi-row wire barriers, overcoming broad moats and generally “ironing” the enemy's defenses. 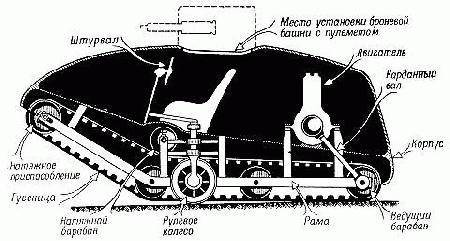 The Porokhovshchikov rover was tested several months earlier than the British experienced their "little Willie." But the English tank, tested 30 January 1916, was under the brand name MK-1 immediately adopted.

In September 1916, the first reports appeared in the press about the use by the British of a new weapon - "land fleet". These messages were published in the newspaper "New time" on September 25 (old style) 1916. In connection with these reports, the same newspaper dated September 29 (old style) 1916 published an article “The Land Fleet - a Russian invention”, which revealed to the general public the unsightly role of the main military-technical department in delaying Russian work on the creation of new weapons - combat cross-country vehicles. 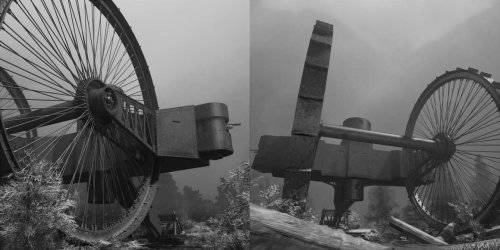 The second project, embodied "in iron" in the Russian Empire, is Tsar Tank N.V. Lebedenko, aka Bat. The idea of ​​this construction, which was unlike anything else, was born to Captain Lebedenko during his service in the Caucasus, when he first saw the arbs of local peasants. Being a man with connections, he "went out" to the very "Russian Father aviation»Nikolai Egorovich Zhukovsky. He recommended his nephews to him - students of B.S. Stechkin and A.Mikulin. The development in appearance was like a gun mount several times enlarged with two huge 9-meter drive wheels with tangential spokes (by the way, the strength of these wheels was calculated personally by N.E. Zhukovsky) and a smaller man-sized steering wheel. The armament of the Tsar Tank was made up of two guns and machine guns. Each wheel was driven by its own Maybach engine with a capacity of 240 horsepower (!). The main disadvantages of this tank were the rather high pressure on the ground and the easy vulnerability of the spokes to the enemy artillery. During the design process, B. Stechkin and A. Mikulin managed to realize a number of brilliant technical solutions. At the beginning of 1915, a brilliantly designed project was presented at the GVTU, and a self-moving mock-up reduced by several times successfully overcome obstacles in the form of pencil boxes and books in the game room of Tsarevich Alexei Nikolaevich.

And now, finally, the day of sea trials has come. In 60 versts north of Moscow, near the ancient city of Dmitrov, a platform was cleared near the station Orudevo in the forest, which, in order to protect themselves, was surrounded by a palisade and an earthen wall. In August 1915 of the year, on the appointed day in the presence of numerous representatives of the army and the military ministry, the car driven by Mikulin began to move quite confidently, immediately, like a match, breaking a birch that was on the way. This event was greeted by the applause of those present. However, after passing a few tens of meters, the miracle tank was stuck in the shallow hole with the rear wheel and could not move on, despite all the efforts of the Maybach engines that had reddened from the exertion — even their efforts were not enough to pull out the Tsar-tank. 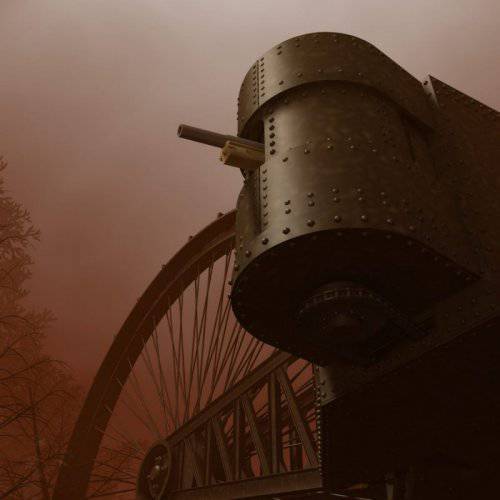 After such a major failure, interest in Lebedenko’s tank went out at once, the tank was abandoned in the same place where it was tested; in the 1923 year, what was left of the Bat was dismantled, and only the remnants of the earthen wall now remind of Captain Lebedenko’s ambitious project.

As a result, during the First World War, Russian tanks did not appear on the battlefield. But in the set were released armored cars, which took the most active part both in the First World War, and in the beginning of the Civil War in Russia. Which is typical, quite a significant part of them were produced on the chassis of the first domestic cars of the firm "Russo-Balt". Several types of such armored vehicles were produced, but the most financial and moral support of the GVTU was the project of engineer Kegres, who proposed to transfer all military equipment to a half-track. But this sensible decision was not to be realized before 1917, two revolutions prevented.

Only in 1919, at the Putilov factory, 6 armored cars "Austin-Putilovsky Kegress" were launched, which in the same year joined the battle on the side of the Bolsheviks in battles against the troops of N.N. Yudenich near Petrograd. In the west, such a combat vehicle was called the "Russian type of tank."

We are in Yandex Zen
The artist, the wanderer, the warrior. Vasily Vasilyevich Vereshchagin. 110 years from the date of death
Fedor Ushakov - the holy admiral
5 comments
Information
Dear reader, to leave comments on the publication, you must to register.