A new type of destroyer is being built in Japan 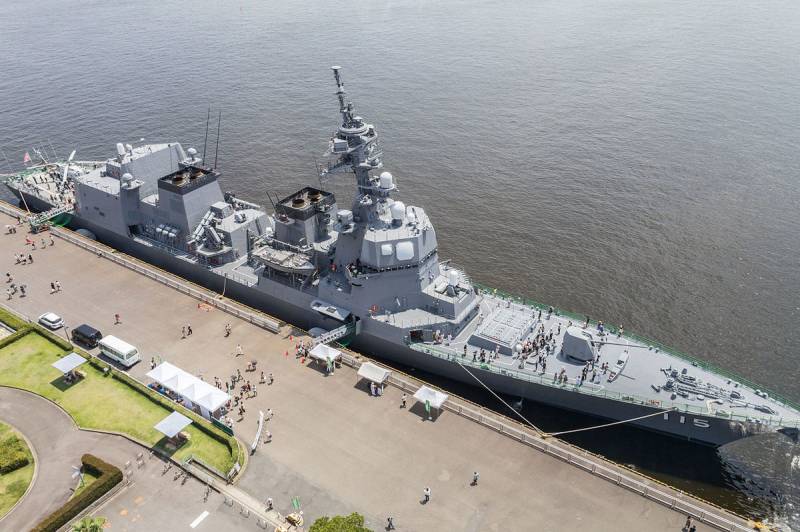 Japanese ships can be distinguished by the ideal state of the decks and sides. Beauty is achieved in two ways: 1) traditional Japanese accuracy and attention to detail; 2) is an extremely young age that many ships do not exceed 10 years.

The update is unnoticeable, without any fuss and promises to build N ships by ... the fifteenth year.

Four are classified as helicopter destroyers. With a solid flight deck and dimensions, clearly exceeding the size of conventional destroyers. But this is not the “Mistral”. Japanese helicopter carriers are designed to operate on the high seas, as part of high-speed squadrons of warships. In concept, they are close to the Soviet aircraft-carrying cruisers (TAVKr Ave 1143), adjusted for their smaller sizes and more balanced characteristics for solving clearly defined tasks (PLO). 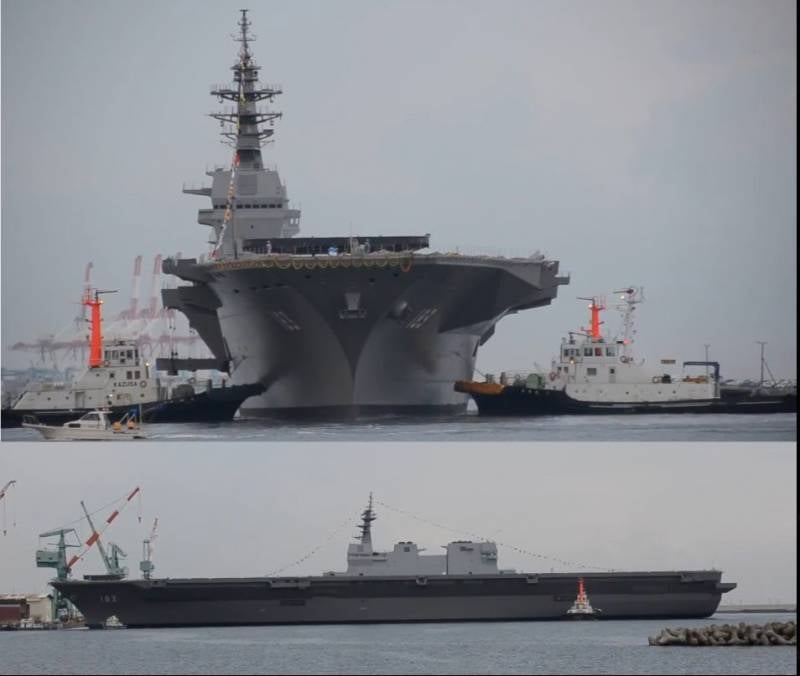 From the destroyers they got an impressive range of means of detection (radars with AFAR, sonars). And anti-submarine helicopters of the “Hyuga” type are also not a weak defensive complex, 60 medium-range anti-aircraft missiles.

Two destroyers (type "Atago") - enlarged copies of the American "Berkov", equipped with the "Aegis" system and 90 launchers for SAM, and SM-3 space interceptors.

The last four are the Akizuki-type missile destroyers (they entered service in 2012 - 2014). Small for its class (7000 tons), but equipped with the most modern electronics. Ground for detecting low-flying targets.

The appearance of these ships completed the formation of the air defense circuit of Japanese connections. In this scheme, “melee destroyers” cover “senior in rank” - ships equipped with the Aegis system, which are responsible for intercepting targets at high altitudes.

Nobody else has such a competent system, even the US Navy.

But less than a couple of years, and the Japanese launch another destroyer of a new type (design DD25), named Asahi. In honor of the battleship of the Russo-Japanese War. 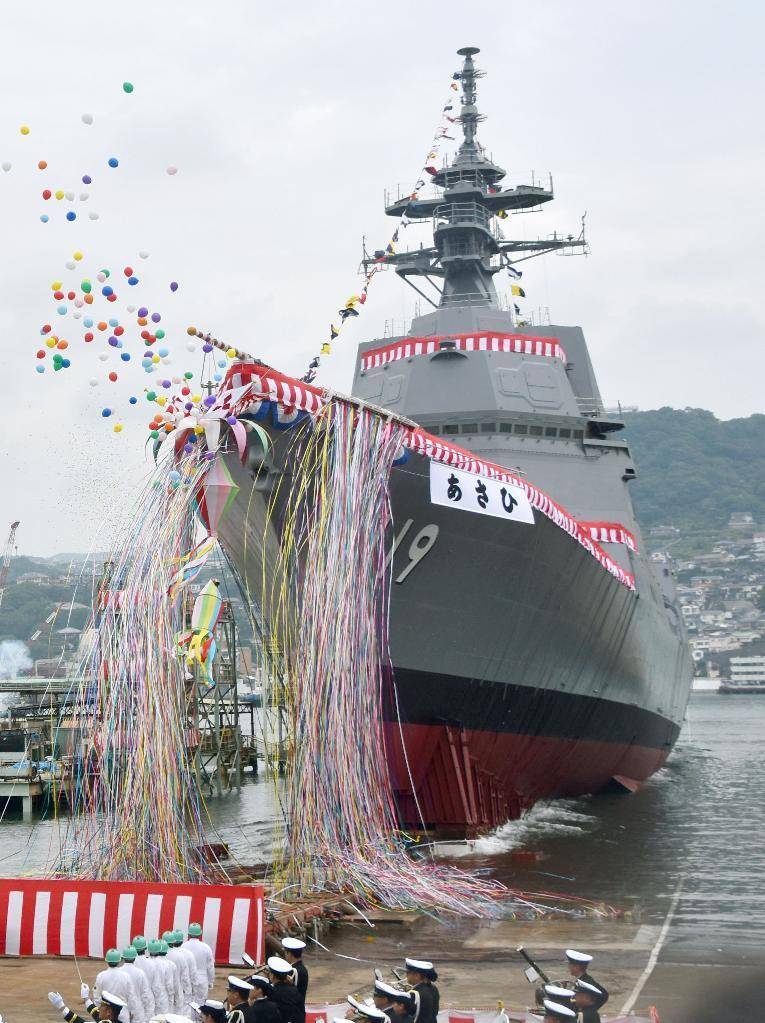 Who does not say; who says does not

The appearance of “Asahi” came as a surprise even to those who are closely following the construction of warships around the world. Yes, this went only vague rumors about the development of two series of newest destroyers - the budget DD25 and the promising DD27, combining conventional weapons with weapons on new nat. principles. Without specifying specific characteristics and the number of ships under construction.

However, today the amount of information has increased slightly.

Everything else - the conclusions made on the basis of the photographs. 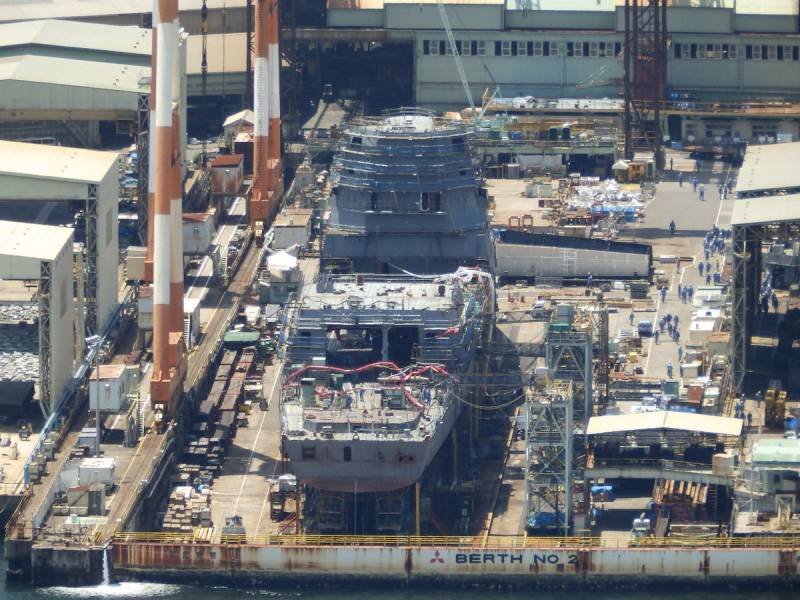 One of the first images of the DD25 destroyer under construction

First of all, it should be noted that the Japanese still managed to build a destroyer that does not look like an aircraft carrier.

Based on the statements, the main purpose of “Asahi” will be anti-submarine defense. The design of the destroyer does not contain a large number of innovative solutions. DD25 - another step in the development of Japanese 2010 destroyers. (“Hyuga”, “Izumo”, “Akizuki”), carrying similar combat systems and means of detection.

On the external surfaces of the superstructure, there are visible elements of a characteristic form — places for installing antennas of a multifunctional radar, like FCS-3A. Radar complex, consisting of eight active headlights. Four perform the functions of detection, four - missile guidance. The system is designed to repel attacks in the near zone using low-flying anti-ship missiles. 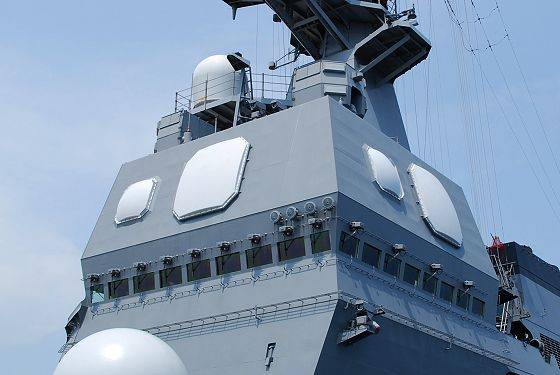 Antenna radar destroyer helicopter carrier "Hyuga"
The combat information system (CICS) is likely to be represented by the ATECS system.

Advanced technology command system (ATECS) is an independent Japanese development that takes into account all the technical nuances and tactics of using ships, also known as “Japanese Aegis”.

The possibilities of the new “Asahi” coincide with the previous project “Akizuki”. The main difference is in the installation of a new sonar, the characteristics of which, as already noted above, are classified. In the presented pictures, there are no images of the GUS. It may be a towed low-frequency antenna and / or an antenna with a variable depth of immersion. With the corresponding changes made to the destroyer CSI.

At the rear of the superstructure there is a helicopter hangar and a landing pad.

Armament - according to the established tradition, 32 or 16 underdeck launchers. On the amount you can not pinpoint. Like all modern ships, “Asahi” will be constructively underloaded, in order to save money in peacetime. If necessary, the number of DPS and other weapons on board can increase unpredictably.

Despite the lack of information on the exact composition of weapons, the meaning of the appearance of these ships is beyond doubt. The Japanese concept provides for the creation of a layered defense (air defense / air defense) for combat maneuvering areas of ships performing missile defense tasks.

The Japanese are equally well aware of the threat posed by modern low-flying missiles and submarines. Hence a series of multifunctional destroyers with developed defensive capabilities, in parallel with which high-speed helicopter carriers are being built with anti-submarine helicopter squadrons.

In fact, few people realize that in the field of anti-submarine defense, the Japanese fleet has long been the first to take the lead in the world.

Yes, and in other parameters, he is already catching up with the American fleet. To date, the Japanese Navy has 30 warships in the ocean zone with missiles.

Despite the apparent diversity of destroyer types, all combat complexes, systems and mechanisms are strictly unified. So, all the ships of the latest series (“Hyuga”, “Izumo”, “Akizuki”, “Asahi”) carry the same set of sensors and BIUS. Gas turbine power plants are represented by only two types of turbines - LM2500 and Rolls-Royce Sprey, manufactured under license. For the storage and launch of missiles of all types, standard MK.41 launchers are used. 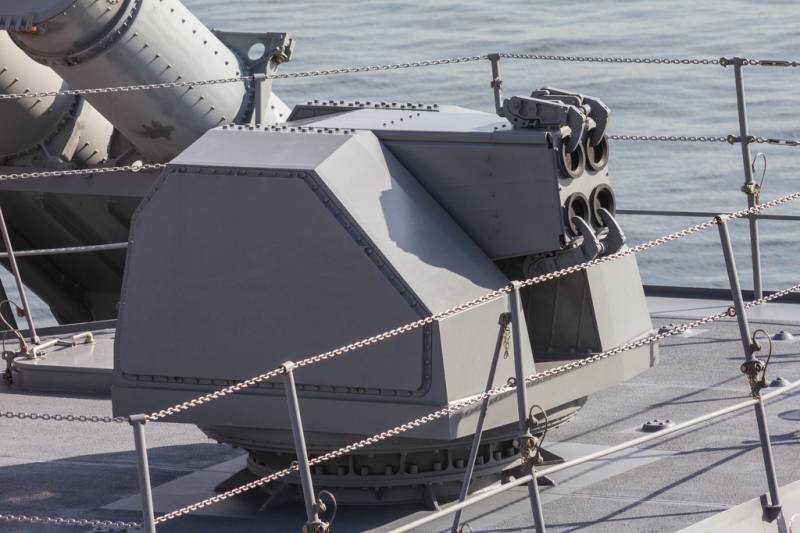 Floating Acoustic Jammer (FAJ) aboard the Akizuki destroyer. The system shoots acoustic false targets (“rattle” floats) at a distance of up to 1000 m from the ship’s side, the battery life of the 7 is min.

The surface component of the Japanese Navy has a strictly defensive purpose. Despite the presence of a certain number of anti-ship missiles (“Type 90” of their own design), Japanese destroyers do not carry shock weapons in the form of long-range missiles. Officially, this is connected with the article of the Japanese constitution prohibiting the creation of such systems. There is also a modern principle in which shock tasks are considered the prerogative of submarines and aviation.

Whenever the topic is Japanese fleet, the public has associations with the Russo-Japanese War and Tsushima. The wound inflicted in that battle cannot heal for over 100 years. The reason was a deafening defeat from those who were considered "funny macaques" and helpless vassals of Great Britain.

Lord, the repetition of Tsushima in our day is impossible. To do this, the ships should be on both sides, and not just on one side.

In the Tsushima battle, as well as during the battle in the Yellow Sea, Russian and Japanese squadrons fought. Consisting of equal-sized ships built at the same time, on the same technical level. At the same time, at the beginning of the last century, the Japanese had not yet observed such a clear numerical superiority over the Russian fleet. 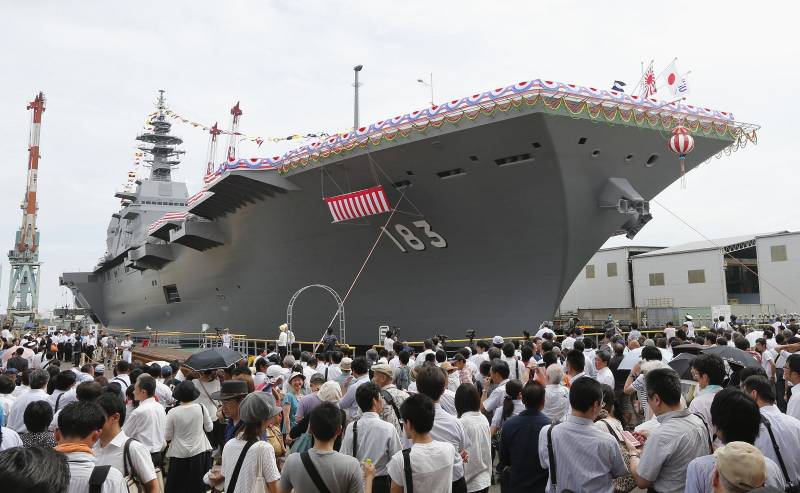 Launch of Izumo helicopter destroyer, 2013 year. The second aircraft carrier of this type will be commissioned on 22 in March 2017. 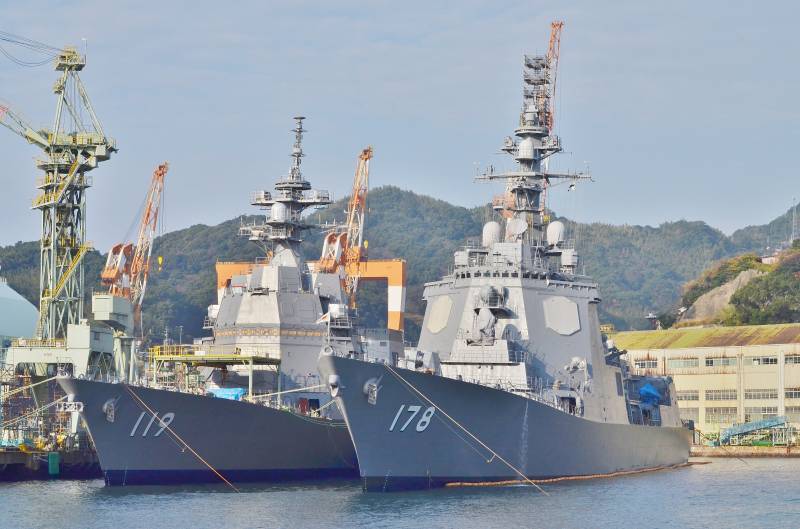 "Asahi" under construction next to the major destroyer "Asigara"