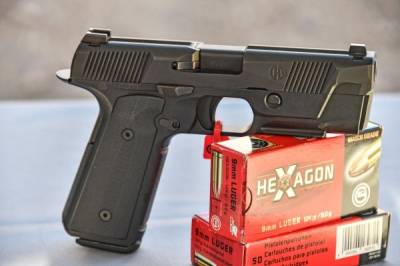 Recently, plastic has confidently pressed steel in individual parts of the firearms. weapons. Despite the fact that polymers fully cope with the loads that occur when using weapons, can reduce the overall weight and cost, many still do not trust plastics. For this reason, very rarely, some manufacturers produce all-metal weapons. This year, a similar gun presented the company Hudson. Given that most models of firearms at the SHOT Show 2017 show were more than half plastic, this gun immediately attracted attention.


The reasons for the appearance of the gun Hudson H9 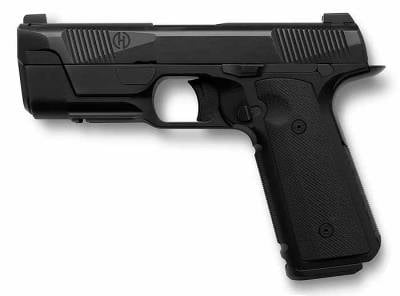 As always, the emergence of new weapons provoked by demand in the market. Indeed, in recent years, too many new models of pistols are made with plastic frames, the only exceptions being that pistols for very powerful cartridges, of which there are not so many.

Thus, a small niche was formed on the market, albeit a small niche, occupying which the manufacturer can make a profit. While other companies were chasing state orders, the designers at Hudson designed the new pistol with a metal frame. 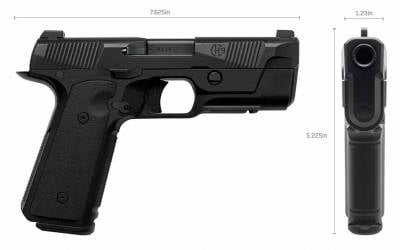 In addition to the all-metal construction, the gun has another advantage over similar weapons - it is based on the well-known Colt 1911. Although many refer to the M1911 as an inviolable classic, not less people understand that, whatever one may say, the weapon is outdated and needs updating. Thus, the success of the gun can be guaranteed, albeit with a small circle of weapons lovers. 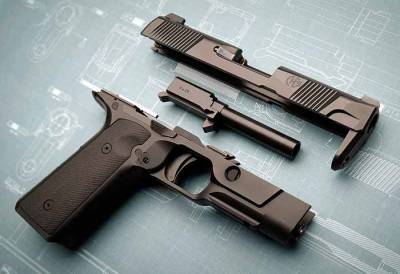 Despite the fact that the basis for the pistol served as the Colt 1911, they have quite a lot of both external and internal differences. First of all, the pistol has no trigger. Shock trigger mechanism of a shotgun weapon of only double action, so to speak, with the latest weapon mods.

The second clear difference is the enlarged frame under the barrel. This tide is due to the fact that the designers have significantly reduced the height of the return spring guide. This is done in order to reduce the toss of a pistol when fired. It is difficult to judge how effective such a decision is, but even if there is a minimal effect, then why not.

The next detail that attracts attention is the release key. It is located automatic fuse, ensuring the safety of the handling of weapons. Actually this is the only safety device gun Hudson H9. Despite the fact that on the back of the handle is clearly visible key automatic safety, characteristic of the Colt 1911, this item has no purpose, it is left for greater similarity with the original gun. 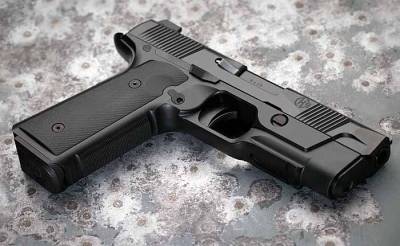 In addition to the modified trigger mechanism of the weapon, the changes also affected the automation system, which, although it still works, uses the recoil energy in the short course of the barrel, but without the swinging “earring”. Now the decline of the breech breech for disengaging it from the casing of the shutter is due to the figure cutout in the tide under the chamber. Coupling the same with the barrel cover-casing is due to the protruding part above the chamber, which enters the window for ejection of spent cartridges.

Sights gun consist of a pillar and front sight, which can be removed and replaced by others. In addition, under the barrel of the weapon in the frame there is a seat for a flashlight or laser pointer.

Taking into account all these changes, you can make an uncomplicated conclusion that the Hudson H9 pistol is just a weapon that looks like the Colt 1911, but in reality it is a completely different pistol with its own design features and, accordingly, its own advantages and disadvantages.

Characteristics of the gun Hudson H9

Due to the fact that the designers deliberately abandoned the plastic in the design of the weapon, the gun turned out to be quite heavy by modern standards, its weight is 960 grams without cartridges. Dimensions of weapons are also considerable, but quite acceptable. The length of the gun 195 millimeters, thickness 31 millimeter, height 132 millimeter. The length of the barrel with all this is equal to 109 millimeters. The weapons are powered from two-row stores with an 15 xNX9 ammunition capacity of 19.

Pros and cons of the gun Hudson H9 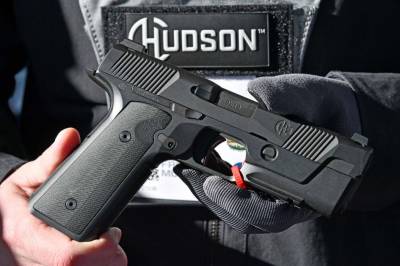 The main plus of the Hudson H9 pistol is its external similarity with the Colt 1911, whatever one may say, but many can buy it. The second big plus is that the frame of the weapon is made of metal, even though it increases the weight of the gun, the metal is still more resistant to external damage, and the scratches on the steel look like decoration of the weapon, but on plastic ... it is, of course, a matter of taste.

Separately, it should be said that the trigger mechanism was reworked. Now the gun is completely safe, even with a cartridge in the chamber and is always ready to fire. True, the shot will happen when the trigger key is tight enough - 4 kgf, which is not very convenient, especially since every shot of this weapon will be accompanied by such an effort of pressing. In general, over the past few years, the number of new pistols with such a trigger mechanism has increased dramatically, which shows the same exhibition SHOT Show.

It should be noted, and bilateral weapons. On both sides of the gun, slide shutter buttons are displayed, and the magazine eject button can be rearranged to any convenient side.

Disadvantages of a gun Hudson H9 are available, albeit in small quantities. The first is the weight of the weapon. Still, one kilogram without ammunition with a barrel length of a little more than 10 centimeters is a lot in modern times. It is impossible to note the advantage of the fact that the automatic weapon system was changed. Yes, it has become more reliable and durable in comparison with the original system with a swinging "earring", but the feeling of deception is still present. It seems to be a weapon in appearance and looks like M1911, but this is a completely different weapon.

Ctrl Enter
Noticed a mistake Highlight text and press. Ctrl + Enter
We are
Pistols of the Hungarian gunsmith Rudolf von Frommer (part 2)Sharps pistols variants
21 comment
Information
Dear reader, to leave comments on the publication, you must to register.