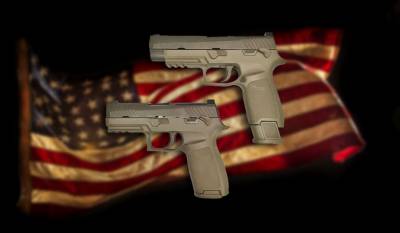 It's no secret that for quite some time now the main pistol of the US Army is the Berretta 92 in various versions. Despite the fact that this gun is really good, although it has its drawbacks, on January 20, 2017 it is officially sent “retired”. True, it is worth noting that “retirement” is extended for a decade, but now it is known for sure that it will replace it. At SHOT Show 2017, SIG Sauer announced that it had received a contract from the U.S. Department of Defense to completely replace the Berretta 92 with a SIG Sauer P320 pistol. The amount of the contract is slightly less than 545 million euros. Under the contract armory the company has been obliged for 10 years to completely replace the obsolete pistol with its new one in the full-size version, as well as in the compact one.


At the moment, this gun is in service with several US police departments. In addition, the Thai police ordered 150000 units of these weapons. The civilian version of this gun is also available on the market in a wide variety of options.

The design of the gun SIG Sauer P320 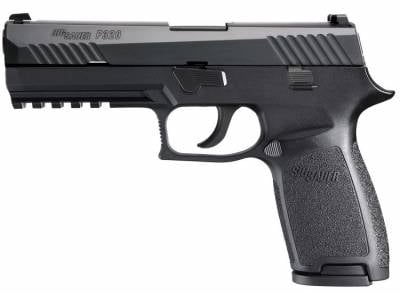 The main feature of the design of weapons is that the entire gun is assembled on a metal base, which is inserted into a plastic frame, the barrel and casing-bolt interact only with the metal, which gives the weapon greater durability. This solution allows you to adapt weapons for specific needs, using a standard set of parts. In fact, all variants of the SIG Sauer P320 are obtained only by replacing the barrel, plastic frame and casing-bolt. The trigger mechanism, the bolt itself and the base of the pistol remain unchanged.

This feature of the weapon allows not only to make a relatively quick adaptation of a large number of pistols to the needs of the customer, but also has a positive effect on the cost of production, as well as subsequent repair. Since the main weapon assemblies are interchangeable even in a full-sized pistol model and subcompact, repair will be limited to a simple and quick replacement that can be carried out by the owner of the weapon or the soldier, even in field conditions. 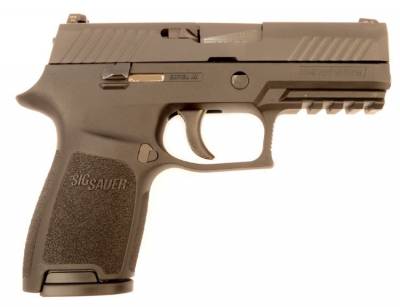 An interesting decision of the company SIG Sauer was to release several variants of plastic frames at once. And it is not only about the color of plastic and various sizes for specific models of weapons. With the replacement of the plastic frame, you can adapt the gun to the size of the palm of the arrow, well, given that there are no metal parts in the plastic frame, the price of the frame will be minimal.

It was interesting to solve the issue with the number on the frame of the weapon. Since the plastic frame is replaceable, it was necessary to keep the weapon number even when replacing the frame with another one. The solution was found in knocking out the number of weapons on a metal-based weapon, and in the frame they made a slot for this number to be visible.

The basis for the pistol became automatics with a short stroke of the weapon barrel and unlocking of the barrel when the weapon barrel was bent. The trigger mechanism udnikovy double action with dovzvod martial spring when you press the trigger. 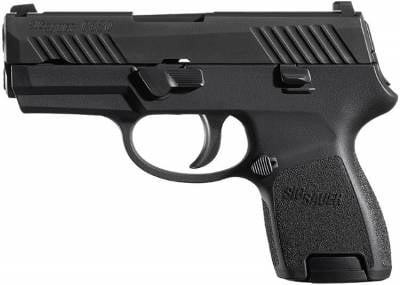 The safety of handling weapons is limited only by the automatic safety on the trigger and the pressing force of about 3 kgf. This allows you to wear a cartridge in the chamber with a minimum risk of accidental firing and at any time to shoot as necessary. There are also weapon options with a fuse switch that blocks the hammer and trigger of the gun. In addition, you can meet guns without safety keys on the trigger.
The gun is fully bilateral. So, the slide delay key is duplicated on both sides of the weapon. The magazine eject button can be rearranged on either side of the weapon.

Sights are presented entirely and front sight, which can be replaced by more familiar to the shooter. Standard sights have the ability to adjust horizontally by shifting the front sight to the right-left. The standard pillar is not regulated, but there are options with vertical adjustment, but such a need is not demanded by the army or the police.

On all versions of the weapon, except for the most compact, there is a seat under the barrel of the weapon for mounting a laser pointer or flashlight. On the housing-bolt can also be installed a seat for the collimator sight between the whole and the window for ejection of spent cartridges. 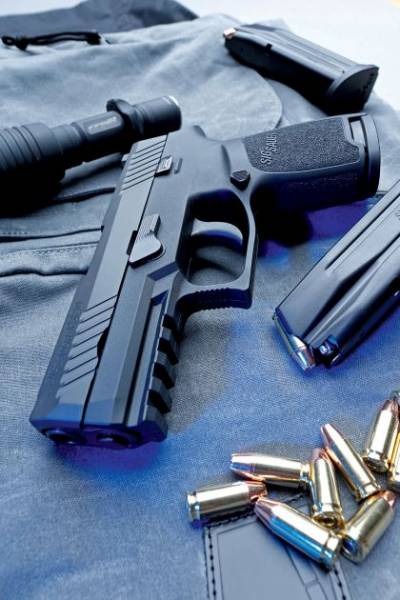 The main advantage of the gun SIG Sauer P320 is the ease of its repair, plus the ability to customize the weapon to the specific needs of the shooter. Separately, it is worth noting that the weapon, while remaining relatively safe, is constantly ready to fire. Well, of course, not the highest price with high quality.

The weapon’s drawbacks are also present, unfortunately, without them, nowhere. Effort when pressing the trigger in 3 kgf, albeit small, but it affects the accuracy of shooting. In general, manufacturers have recently observed a love for non-cuff systems of a firing mechanism. In general, this is understandable, less details - less cost, which means more demand. It is not clear why a double-action firing mechanism with the possibility of a safe descent of a drummer is very rare. With such a system, the first shot would be made with an effort when pressed, and the subsequent ones would be easier. In general, the path of fashion, albeit the armory, is not always logical. 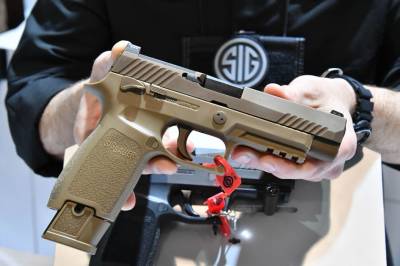 Replacing the entire plastic frame in order to fit the weapon under the shooter’s arm is certainly an interesting decision, but it was not clear why it was impossible to use removable covers. Such a solution would be simpler and cheaper for the end user.
In general, the gun SIG Sauer P320, for the two years that exists on the market, has established itself as a reliable and unpretentious weapon, working in the most extreme conditions. This is not surprising, since the automation system and the trigger mechanism of the weapon have no innovations and have long been worked out in production, so there is simply nowhere to be mistaken.