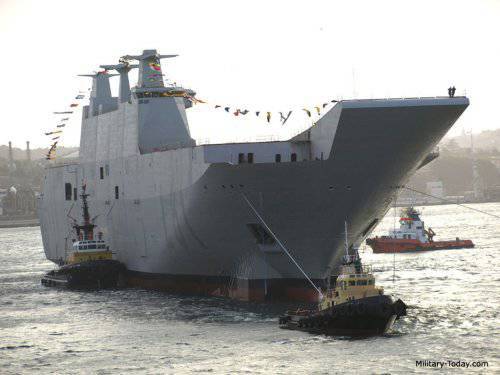 The landing helicopter carrier ship dock (LHD) Juan Carlos I, is the largest ship of the Royal Navy fleet Of Spain. It was built in March 2009 at the Navantia Ferrol Shipyard. The ship is named after the king of Spain and its construction cost 360 million euros.

The amphibious assault ship "Juan Carlos I" can be attributed by analogy to the ships of the US Navy "Wasp" type, but with the advent of the springboard on the flight deck it can already be called a light aircraft carrier.

The amphibious assault ship "Juan Carlos I" has four decks onboard, each of which is designed for certain cargoes: a deck for personnel, a flight deck, a garage for tracked and wheeled vehicles and a docking chamber.

An amphibious assault ship carrier dock is considered a multi-purpose ship that can be used as an aircraft carrier, as well as to support ground landing operations. In addition, the warship is able to take on additional cargo in the form of 144 containers. 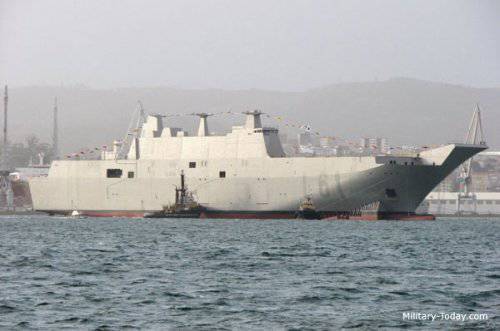 In addition, another important function of the ship is the ability to evacuate people from areas in distress. To do this, there are two operating theaters on board for emergency medical care, resuscitation, traumatology, X-ray, laboratory, dentistry, and other medical cabinets. The medical facility is connected via an elevator only to the dock camera.

The flight deck of a warship has the following dimensions - length 201,9 m, width 32 m. It can accommodate up to six “Matador” type aircraft with vertical take-off and five helicopters. Under the flight deck is a two-level hangar area 6000 square. can accommodate up to 12 aircraft and 7 helicopters. For the delivery of aircraft from the hangar, two lifting devices of increased carrying capacity are used. This is done for the future if heavy transport planes appear on board the ship in the near future. 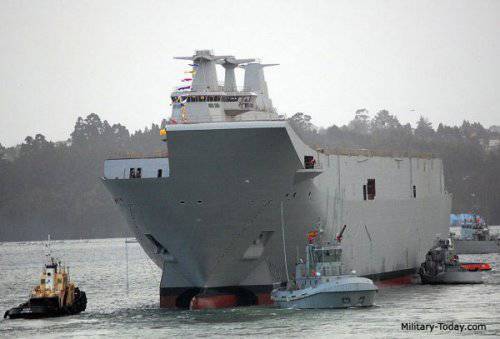 The docking chamber has dimensions - length 69,3 m, width 16,8 m. Four vehicles of type LCM-1E or LCM-8 can fit inside a huge room, from 4 to 6 units of a high-speed boat of type RIB, one air-cushion type LCAC and one LVT .

The power plant of the helicopter carrier of the ship-dock "Juan Carlos I" is an electric motor. It receives energy from one gas turbine unit and two diesel generators. This type of installation allows you to reduce noise, vibration, fuel consumption, maintenance costs and ensure sufficient maneuverability of the ship. A warship is set in motion with the help of two propulsion units of the Azipod type. 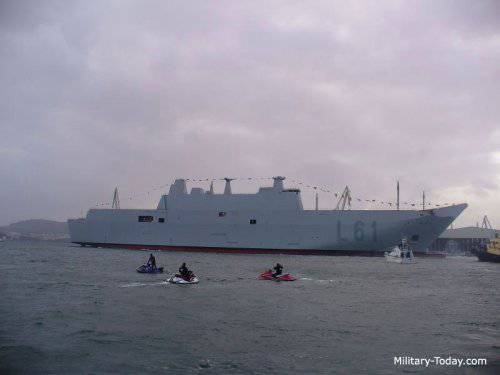 Since 24 September 2009, the amphibious assault ship “Juan Carlos I” docking is still undergoing sea trials in the waters of the Spanish port of Ferrol, but according to expert estimates it is already showing excellent results.

In July, 2008, the shipyard “Navantia” was laid the same type of ship-dock, which will be called “Cantabria”.

In 2007, the Australian Prime Minister expressed a desire to purchase two ships of this type from the Spaniards to create Canberra-class docking ships. Assembly work is planned to be carried out in Australia by BAE Systems Australia with the involvement of Spanish specialists. 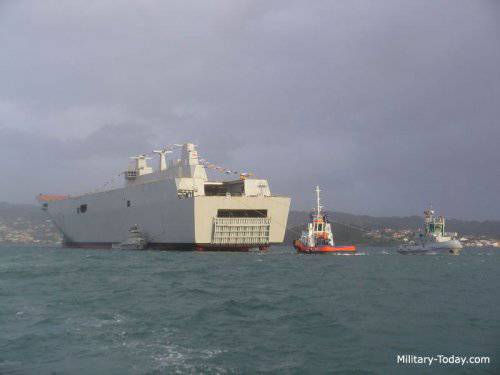 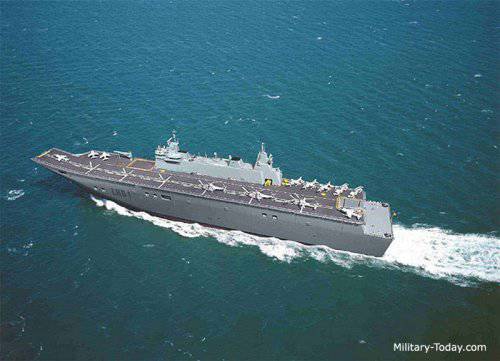 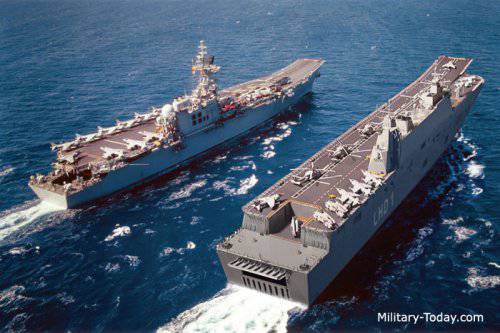